Name a single Jew killed by the Nazis! - Joseph Goebbels

The document below is the text of an article by Dr. Joseph Goebbels, Reich Minister of Public Enlightenment and Propaganda, published on the front page of the Sunday Express newspaper, in the United Kingdom, on Sunday March 26 1933.

The context behind the article is that following Adolph Hitler's appointment as Chancellor of Germany in January 1933, and the Nazi victory in the March 5 national elections, there had been calls by various international Jewish organisations for a trade boycott of Germany.

The Daily Express had reported on this development on its front page on Friday March 24 1933 under the heading: "Judea declares war on Germany". The newspaper stated that "a strange and unforeseen sequel has emerged from the stories of German Jew-baiting. The whole of Israel throughout the world is uniting to declare an economic and financial war on Germany."

Goebbels was invited to submit a reply by Sefton Delmer, the Daily Express' bureau chief in Berlin, which appeared in the Sunday Express two days later. In his diary entry for that day Goebbels wrote "My article... against atrocity propaganda has a good effect. It brings us some relief in England."

That same day that Hitler and Goebbels met at the latter's retreat at Berchtesgaden to finalise plans for a boycott of Jewish businesses in Germany. The demand raised by the Nazis during the boycott was for "the number of Jews in all occupations" to "be restricted to their percentage of the population in Germany."

German "Minister of Propaganda and Enlightenment"

A REVOLUTION has been consummated in Germany the like of which for discipline and organic legality it would be hard to find in the history of the world.

But there have been certain elements at work in various other countries inventing and distributing fearful stories of atrocities in Germany with the intent to lower Germany's reputation in the eyes of the world and stirring up foreign countries against the Government of the German national awakening.

It is hardly necessary to emphasise that the originators of these hair-raising tales are the same people who were responsible for similar stories during the war.

Then they acted as enemies of Germany by disseminating wild descriptions of the absolutely imaginary atrocities of German soldiers. To-day every one privileged to witness the mighty awakening of the German people cannot but admit that never in the history of man has a revolution of such completeness and involving such upheaval in every sphere been carried through with such discipline and so quietly as the national revolution beneath the banner of Adolf Hitler.

And yet unscrupulous agitators abroad are spreading rumours that Jews in Germany are being shot wholesale, tortured and executed under the most inhuman agonies.

In the face of such incredible reports, the temptation is very strong to put up a reward for any one who can name one single Jew who has met his death in the course of the national revolution.

What is the state of affairs in Germany?

All business is taking its normal, orderly course.

All departmental stores can keep their doors open unmolested. The public are not deterred from entering the stores and making their purchases.

Every one in Germany can do as he likes, can do or leave anything undone anything he wishes, so long as he keeps within the law.

Auxiliary police reinforce the regular police as an absolute guarantee of peace and security. The number of capital crimes has actually decreased considerably since Adolf Hitler's assumption of authority. The Germany people must be admired greatly for their quiet and level-headed behaviour, for it must not be forgotten that the anti-Semitic movement in Germany is not entirely without cause.

The Jews living in Germany, in view of the small percentage they represent of the entire population, have held such an enormously large number of powerful posts in the life of the nation that the Germanic element seemed almost completely excluded from the leading positions.

In addition to this we must not forget that the names of prominent Jews are involved in nearly all the post-war corruption scandals.

In this connection I should like to mention the cases of Barmat, Kutisker, Sklarz and Sklarek which attracted attention far beyond the boundary of Germany.

This much I can promise. The conditions in Germany as far as safety and order are concerned are more stable and more sure than ever before.

Not a hair on the head of any person is touched, and the authorities responsible for the public safety have the power completely in their hands.

The Jews living in Germany can carry out their business completely undisturbed. They can perform their worship and acknowledge themselves in their own Press that the Government takes every precaution for their safety exactly as it does for every other German citizen.

The German nation to-day has other business to do than to stage blood baths and indulge in Jew baiting.

The will of the German people is concentrated entirely on the work of construction, which it is now attacking with all the energy at its command. 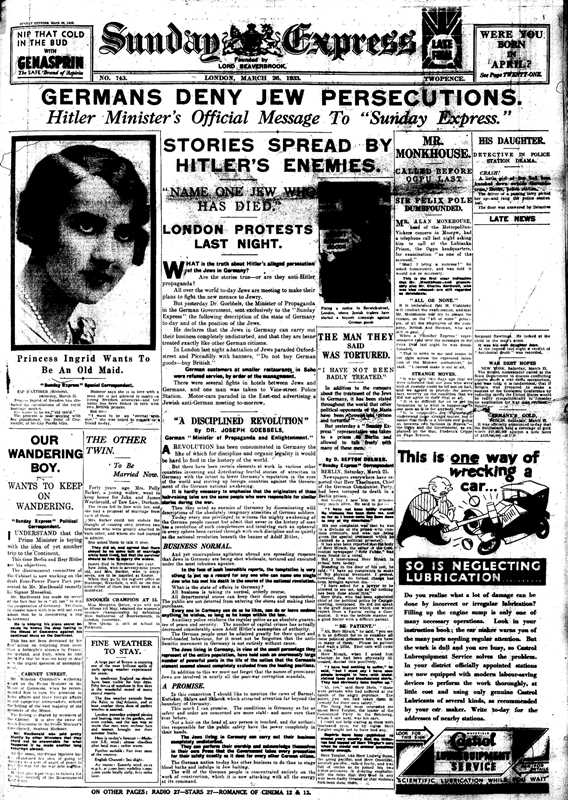