Norma and Malusi: The Movie

EXCITEMENT at the Academy Awards and a patriotic stirring as the Oscar for best documentary feature went to My Octopus Teacher, director Craig Foster’s heartwarming account of his relationship with the cephalopod he bonded with in an Atlantic Ocean kelp forest.

Although (spoiler alert!) it doesn’t end well for the octopus, the film nevertheless provides a welcome boost for marine conservation. It’s also a big win for local film-making, providing further impetus to tell the extraordinary South African story on the silver screen.

At this very moment, in fact, scriptwriting elves at Mahogany Ridge Productions are hard at work knocking out drafts for another potential homegrown smash hit.

Provisionally titled Fury (as in “hell hath no…”), it is a revenge psycho-drama based on the true-life experience of Norma Gigaba and her roller-coaster ride through the murk of state capture as seen through the prism of Saxonwold Shebeen glitz.

It’s all very hush-hush at this stage, but a leaked early plot outline, hastily scribbled on a lipstick-smeared napkin, gives some idea of what viewers may expect.

We open in the present on Norma, she of haughty leonine beauty (think Angela Bassett crossed with the young Faye Dunaway), as she strides into a crowded chamber where the Zondo commission is sitting. Her features are at odds with the craggy faces of the lawyers around her. She appears resolute, despite the discomfort of her present circumstances. She is a woman more used to the red carpet, not these dull corridors reeking of municipal-grade disinfectant.

More than that, she is a woman with a score to settle.

As she takes the stand, we dissolve to the late 2000s, when Norma is first swept off her feet by young gun Malusi Gigaba, the married deputy minister of home affairs. An adulterous affair follows. Norma has initial misgivings about her lover. Malusi’s bedroom manner strikes her as odd. But perhaps all deputy ministers are like that, staring at their reflection in the mirror as they make love. Besides which, he is a man with a golden future in the ruling party.

The affair continues and a messy divorce with first wife Thabong Nxumalo follows. Malusi is made minister of public enterprises. The high life gets higher. Champagne flows. Cosplay is introduced to the romance. Malusi gets his kicks dressed as an airline pilot. It’s chicken or beef for Norma. But only the best chicken and beef. Like the fare they’re served when the couple fly first class to Paris, Shanghai and other glamorous international destinations. 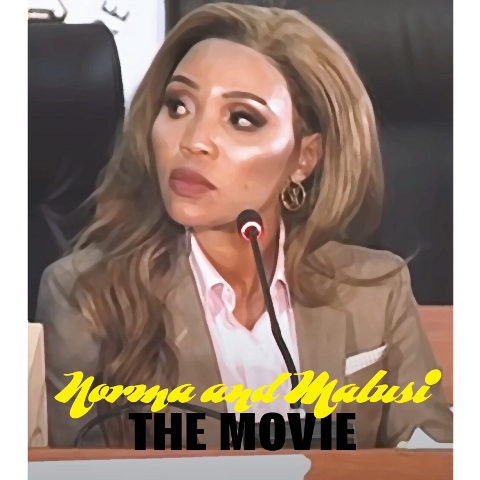 But, and cue dramatic music, the shadowy Gupta brothers are introduced. One of them, Ajay, is in cahoots with president Jacob Zuma’s “special friend”, SAA chair Dudu “Dodo” Miyeni, and they have a terrible hold over Malusi and Norma’s lives.

In a pivotal scene at the Saxonwold Shebeen, sackfuls of cash are seen emerging from a machine. “What is it?” Norma asks. “It is money,” Ajay tells her. “Ordinary people work hard for it. We steal it and give some to Malusi. He then does what Dodo and I tell him to do.”

Any misgivings here are dispelled by the happy news that Norma is pregnant. Malusi makes an honest woman of her. The wedding costs between R4-million and R5-million. Norma’s not exactly sure, but she reasons it’s two weddings, see? A white wedding and a traditional one. So no chitter-chatter of profligacy there. Ajay, meanwhile, pays for a post-wedding, all-expenses-paid trip to Dubai, where the couple live it up at the five-star Waldorf Astoria.

But, and cue more dramatic music, Malusi fails to realise the significance of this largesse and ignores Dodo and Ajay’s instructions to drop SAA’s flights to Mumbai. He is unceremoniously stripped of the public enterprises portfolio and appointed home affairs minister.

And, cue even more dramatic music, the pregnant Norma now discovers Malusi is having an affair with Buhle Mkhize, a preposterously orbed “influencer” living it up in New York. The pretence of a happy marriage continues. Norma’s son is born. Ajay gives the infant a gold chain. Malusi “looks after” the gift. Norma wonders why her husband would steal from his baby son.

An ugly public spat breaks out between Norma and Buhle. It blows hot and trivial all over social media. Realising, as kept women often do, the good times are ending, the bulbous Buhle dumps Malusi. Having been warned so often by Norma to keep his hands to himself, Malusi does just that.

The humiliation is too much for Norma. Despite the birth of another son, her marriage falls apart. In a bid to stop estranged and former wives running off with the kids, Malusi revises the country’s visa regulations and practically destroys the South African tourism industry. Norma realises she must escape this toxic mess.

The pace increases as the tension is ramped up. The increasingly paranoid Malusi attempts to erase Norma’s cellphone data as he prepares to testify before the Zondo commission. Her passports mysteriously disappear. These contain evidence of the couple’s once-glamorous jet-set lifestyle. She is unlawfully arrested by the Hawks after she vandalises her philandering husband’s luxury SUV. She receives numerous death threats by SMS and fears for her life.

The campaign of intimidation appears to work. Norma dramatically refuses to testify at the state capture inquiry. Malusi appears to win the day. But Norma suddenly has a change of heart when she learns that it is okay to rat on a husband, especially if he is a rat. We are back where the film opened. Norma is on the witness stand and starts talking…

The End. Credits roll. There’s the usual disclaimer about resemblance to actual folk, etc. But it’s going to be a humdinger. Pass the popcorn.

I was forced to pare down a large library before moving to the mud island. Among the titles that failed to make the cut was The Best of Maledicta (1987), an anthology of scholarly writings on “outrageous insults, forbidden language, and wicked jokes” edited by one Reinhold Aman. Its front cover boldly warned: “Contains Language Offensive to Blacks, Catholics, Gays, Jews, Men, Women, and WASPs.”

This sort of thing is catnip to me, my interest in vituperation having been stirred by my mother who, one Christmas, had given me a first edition of Swearing: A Social History of Foul Language, Oaths and Profanity in English (1991) by the late Geoffrey Hughes. Mom’s thinking was that if I was going to insult people for a living, I should do so from a position of some authority.

Which is something Professor Hughes had in spades. He had in vain attempted to instil in me a grasp of Middle English and thus tackle Chaucer in an appropriate manner. Despite this setback, at Wits in 1980 or thereabouts, Hughes’s career was more illustrious, if less colourful, than the one enjoyed by Aman, who, until his dismissal in 1974, was an assistant professor of German at the University of Wisconsin-Milwaukee.

With nothing better to do, Aman started Maledicta: The International Journal of Verbal Aggression which he published from 1977 until 2005. Dedicated to the study of offensive and “negatively valued” words and expressions, its main areas of inquiry were the origin, etymology, meaning, use, and influence of vulgar, obscene, aggressive, abusive, and blasphemous language.

The Maledicta website reveals that submissions to the journal were indeed wide-ranging, as these randomly selected titles suggest: “Taxonomy of Metaphoric Insults”, “Ironic German Medical Terms”, “Viet-Speak”, “Poetic Insults from Ghana” and “Some Terms for Women at an Australian Military Academy”.

It seems unlikely such a publication could exist in the present climate. A caveat lector would probably need to include, in addition to the aforementioned, critical race theorists, social justice warriors, militant vegans, Extinction Rebellion activists, Islamic extremists, Brexiteers, anti-vaxxers, Trump supporters, the morbidly obese, Nigerian baristas, artisanal beer brewers, anarcho-syndicalists, the Zulu monarchy, the gender fluid, terfs, angry Samoans, the incel community, people with beards, some Zimbabweans in the hospitality sector and that’s just off the top of my head.

But here we have the Journal of Controversial Ideas, a new open access, peer-reviewed academic publication which, according to the editorial in its inaugural issue, allows contributors to submit papers pseudonymously if they wish, for their own safety. As they put it:

“[What] is widely shared over the internet is often neither genuine academic work, nor popularised but accurate accounts of academic work, but instead the conclusions of academic articles taken out of context and stripped of the reasons for holding them. These distorted conclusions are then circulated to people who are liable to respond with outrage, and this outraged response then proliferates in the manner typical of social media. Some academics get death threats, while others may justifiably fear that their career prospects have been irreversibly damaged. Understandably, they and others who see what has happened to them may decide that the cost of continuing to work in a controversial area is too high.”

The journal is edited by Jeff McMahan, professor of moral philosophy at Oxford, Francesca Minerva, a researcher at the University of Milan, and Princeton bioethics professor, Peter Singer. Its editorial board includes an impressive array of academic heavyweights and literary figures, including our own David Benatar, director of UCT’s Bioethics Centre, and novelist JM Coetzee.

Papers in the first issue include “The Epistemology of No Platforming: Defending the Defense of Stupid Ideas on University Campuses” by Michael Veber, “Black Pete, King Balthasar, and the New Orleans Zulus: Can Black Make-Up Traditions Ever Be Justified?” by Bouke De Vries, and “Deflating Byrne’s ‘Are Women Adult Human Females?’” by Maggie Heartsilver (a pseudonym).

None of which, admittedly, is as unhinged or as prurient as the contents of Maledicta. But it’s an encouraging start, although, as several commentators have pointed out, it is indeed frightening that such a publication is necessary in the 21st century.

Elsewhere, Dr Michael Spence, the provost of University College London, has called on universities in the UK to teach undergraduates how to discuss controversial ideas. This, according to The Times, comes as new legislation is being considered to tackle censorship and campus cancel culture.

To effectively promote free speech, Spence suggested, students needed to be taught how to discuss controversial topics without shouting each other down. “The core issue,” he said, “is we have forgotten how to disagree well. Part of what we have a responsibility at universities to do is to model and to teach students how to disagree well across really sometimes quite profound barriers of disagreement.”

Disagreeing agreeably? Could this catch on? Here at the Slaughtered Lamb (“Finest Ales & Pies’), we have our fingers crossed.

An insult to glaciers