Survey estimates that there were 469 000 new HIV infections in SA in 2012, notes disturbing trends in risk taking behaviour (April 1 2014)

The following is an extract from the Executive Summary of the HSRC's South African National HIV Prevalence, Incidence and Behaviour Survey 2012 released on April 1 2014:

HIV incidence measures are important because they provide insights into the more recent dynamics of the country's HIV epidemic. More importantly, they are the most direct means of assessing the impact of HIV-prevention programmes that the country has implemented. Our HIV-incidence analysis is based on two independent methods: (i) direct HIV incidence measures using a laboratory-based testing algorithm; and (ii) indirect HIV incidence estimates using a mathematical model.

Table IV presents HIV incidence estimates for South Africa in both relative terms (% per year) and absolute terms (number of new infections per year). Our analysis of directly measured HIV incidence indicates that 469,000 new HIV infections occurred in the population 2 years and older during 2012 in South Africa.

The differential HIV transmission dynamics between males and females are reflected in the HIV-incidence profiles. Among adults aged 15-49 years, the number of new infections was 1.7 times higher in females than in males. The incidence rates among young females remain concerning. 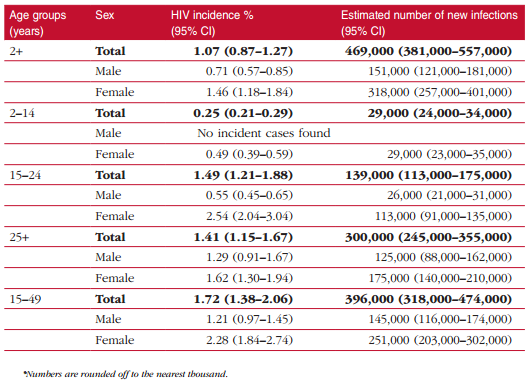 The incidence results by locality type showed that half of all new HIV infections in the population 2 years and older occurred in urban formal areas. However, urban informal settlements had a higher incidence rate than urban formal areas (2.5% vs. 1.1%) among individuals 2 years and older, demonstrating the importance of place of residence as a critical epidemiological parameter for risk of HIV infection. Individuals who were married had a considerably lower HIV-incidence rate (0.6%) than did survey participants who were living together with a sexual partner (3.7%) and those who were single (3.4%).

While more complex contextual measures of frequency and type of partnerships are necessary to expand on these findings, it is certainly an important topic for on-going prevention interventions. Updated indirect HIV incidence estimates using a mathematical model were provided for the inter-survey periods 2002-2005, 2005-2008, and 2008-2012.

It is re-assuring that the two independent methods applied for HIV-incidence estimation for South Africa produced very similar results. However, despite this encouraging development, there is no reason to become complacent in view of the high HIV-incidence rate of over 2% among uninfected female youth aged 15-24 years.

It is conceivable that the beneficial impact of increased antiretroviral treatment coverage on HIV incidence (through viral load reduction in HIV-positive individuals) has been more than offset by the disturbing trends of increased HIV-risk behaviour in the country as presented below.

The NSP for 2012-2016 states as its primary goal a reduction of new infections by at least 50%. In view of our survey findings, this will be extremely difficult to attain given the prevailing transmission dynamics in the country.

Overall, this survey found that almost half (46.4%) of the male respondents aged 15 years and older reported that they were circumcised. The reported circumcision rates varied by age, race, locality type, and province, with those aged 25-49 years (48.8%), black Africans males (52.4%), those from both rural informal areas and urban informal areas (52.3% and 53.4%, respectively) and individuals from the Eastern Cape and Limpopo (74.0% and 72.6%, respectively) having the highest rates.

In terms of circumcision setting, the majority of participants reported that they had been circumcised in traditional settings on the mountain or in the bush/at initiation school (52.5%), followed by in the hospital or clinic mainly through voluntary male medical circumcision (VMMC) (40.1%).

Indians or Asians (16.7%) had the highest rates of home circumcision. A slight majority of those living in urban formal areas (53.2%) and almost half of those from rural formal areas (44.7%) had been circumcised in medical facilities, while the majority of those living in urban informal areas (69.9%) and rural informal areas (69.6%) had been circumcised in traditional facilities. The Eastern Cape (83.15%), Mpumalanga (71.3%) and Limpopo (63.5%) had higher rates of traditional circumcision than did the other provinces, while KwaZulu-Natal (67.8%), Gauteng (58.0%) and the Northern Cape (51.6%) had the highest rates of medical male circumcision.

The pattern of changes seen in VMMC, moreover, mirrored that in the overall rate of male circumcision, with the cumulative total number of males who had undergone VMMC having increased from 1,581,574 in 2002 to 2,268,519 in 2008 to 3,301,196 in 2012. Traditional male circumcision remained relatively stable over the same period.

Sexual debut before the age of 15 years

Overall, it was found that one tenth (10.7%) of respondents aged 15-24 years reported having had sex for the first time before the age of 15 years. Significant differences were found by sex and race, with higher percentages of males (16.7%) and black Africans (11.1%) reporting that they had done so in comparison with their counterparts. However, no significant differences were found by locality type and province.

Overall, it was found that in 2012 about one fifth of all respondents aged 15-19 years (19.9%) were involved in age-disparate relationships involving a sexual partner who was more than five years older than they were. More interestingly, there was a significant sex difference: one-third (33.7%) of all female adolescents aged 15-19 years reported having had a partner more than five years their senior, compared to only 4.1% of their male counterparts.

Trend analysis of data obtained during the three last surveys conducted in 2005, 2008 and 2012 shows that there was a steady increase in age-disparate relationships among females aged 15-19 years, while this has hardly been a feature among their male counterparts over the period.

The survey found that 12.6% of the respondents aged 15 years and older reported that they had had more than one sexual partner in the last 12 months. Significant differences were found across all five reporting domains, with five times more males (20.1%) than females having had multiple partners; younger people aged 15-24 years (22.4%) having had multiple partners more than the other age groups; black Africans (14.5%) than other race groups; other locality types (range: 12.8%-13.3%) than rural formal areas (6.0%); and other provinces (range: 10.1%-14.5%) than the Northern Cape (8.7%), which might explain the low HIV prevalence in this province.

With respect to trend analyses over the four surveys conducted from 2002 to 2012, overall there was a steady increase in respondents who had had more than one sexual partner in the previous 12 months, from 11.5% in 2002 to 18.3% in 2012 (Figure IV) presumably due to decline in HIV sexual transmission knowledge coupled with reduced communication campaigns.

When these data were disaggregated by sex, significantly higher percentages of males (20.1%) reported that they had had more than one sexual partner in the last 12 months than had their female counterparts (4.6%). Among respondents aged 15-24 years there was a significant increase in multiple sexual partnerships among males, from 23.0% in 2002 to 37.5% in 2012, while the percentages were both low and stable (6-8%) across the period of the four surveys among their female counterparts. 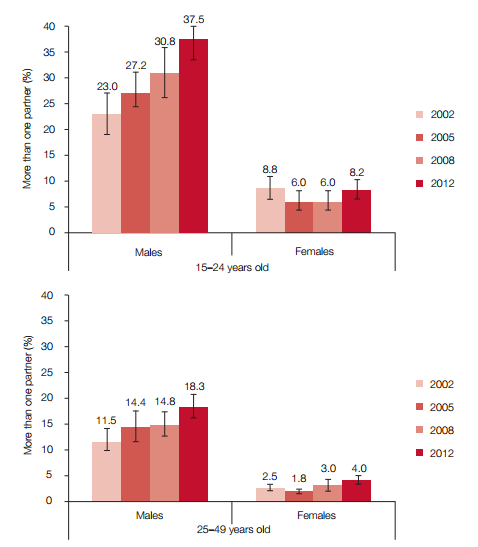 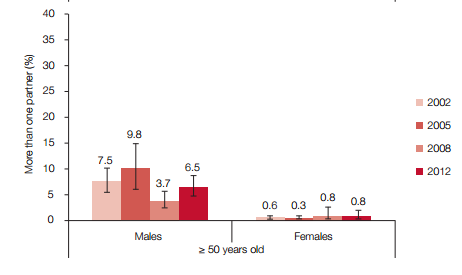 When the trends in condom use at last sex among respondents for each age group by sex over the period of the past four surveys (2002 to 2012) are considered, it emerges that overall condom use at last sex increased significantly from 2002 to 2008 and then significantly decreased in 2012 among all three age groups and for both sexes except among females aged 50 years and older.

In the latter group there was a moderate increase in 2012 in comparison with the 2008 estimates (Figure V). Across the period of all surveys, condom use at last sex was highest among 15-24 year olds, followed by 25-49 year olds, and was lowest among those aged 50 years and older.

Consistency of condom use varied significantly as follows: a significantly higher percentage of males (29.5%) reported having used a condom consistently than females (25.2%); 45.7% of youth aged 15-24 years than the other two age groups; black Africans (31.6%) than the other three race groups; both occupants of urban informal and rural informal areas (32.9% and 29.6% respectively) than occupants of both urban formal and rural formal areas; and those resident in the North West (40.8%), the Free State (40.7%), KwaZulu-Natal (39.6%), Mpumalanga (39.4%), and Limpopo (39.3%) than in the other provinces.

While the disabled aged 15 years and older had the same rate as the national average, people living together who were not married aged 15-49 years of age had the lowest rate at 33.8%.

Although condom use has historically been one of the main HIV-prevention strategies used successfully in the country, especially among the youth, in 2012 condom use at last sex act by both males and females across all age groups decreased to 36.2%, returning to levels similar to those recorded in 2005 (35.4%), a peak having been observed in 2008 (45.1%).

Across all four surveys, condom use at last sex act was highest among 15-24 year olds, followed by 25-49 year olds, and lowest among those aged 50 years and older. Similarly, there were also significant sex differences in each of the three age groups, with males having used condoms at last sex at higher rates than their female counterparts. The decreases in condom use in 2012 compared to 2008 were also significant in eight of the nine provinces, with the exception of the Northern Cape. 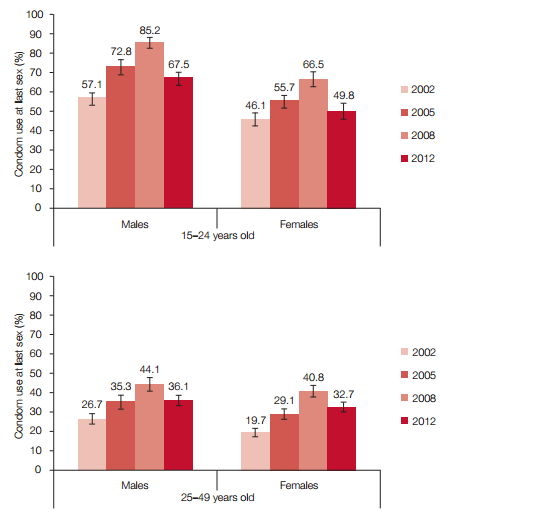 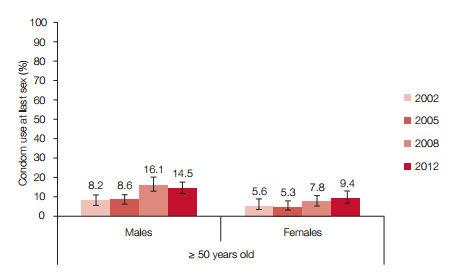 Sexual behaviour in the metro areas

Multiple sexual partnership rates in the last 12 months across the metros of South Africa ranged from 8.5% in the Nelson Mandela Metro to 16.4% in the Buffalo City Metro. Although the differences in rates across metros were not significant, it is still important to note that the prevalence rates of HIV in five of the metros were higher than in the remainder.

This is of substantive importance: the City of Johannesburg and the City of Cape Town were among the metros that recorded large increases of ≥ 75% HIV prevalence between 2008 and 2012.

In relation to marital status distribution in the metros for participants aged 15 years and older across the eight metros (excluding the widowed and divorced because of small numbers), the results showed that the marriage rates were low: only 39.6% of metro residents were married, while 34.2% were ‘living together' with their partner and the remaining 26.2% were single and had no sexual partner. The metro with the lowest marriage rate was Buffalo City (22.6%), while the metros with the highest marriage rates were Cape Town (45.5%), Ekurhuleni (45.7%), and Tshwane (46.6%).

In terms of age-disparate relationships, the prevalence for sexually active persons in the last 12 months aged 15 and older across the metros is that 18.2% of respondents reported having had partners at least five years older than themselves, with Buffalo City Metro reporting the highest rate (22.7%).

The full document can be accessed here - PDF.

We're winning and losing the war against HIV/AIDS - Helen Zille