Rapport: This kind of hack journalism is wrong – Carl Niehaus

Background to the propaganda smear campaign published about me

I said that I will reveal the background to the propaganda smear campaign story that Rapport was planning to publish about me. Now that they have published, here it is.

On Thursday (10 October 2019) the News Editor of Rapport, Herman Scholtz, received an e-mail from a ‘reader’ with the subject: Nuuswenk: Ace se regrethand (News hint: Ace’s right hand). In this e-mail the so-called ‘reader’ wrote the following, and I provide a verbatim translation:

If there is someone one wishes the media would make the kitchen hot for again, it is Carl Niehaus. He has a open Facebook profile, and therein it shows that he has a 23 year old girlfriend.

She is 23 years old according to the photo of her birthday cake. Now, I have so many questions, and just a newspaper will be able to get the answers. Is Niehaus a blesser?

What happened to the former Mrs. Niehaus, and the former?

What does the new girlfriend see in him. And what does he see in her?

What does he do to spoil her?

What does she do in this regard in return?”

Scholtz took this e-mail and instructed a reporter, Jaco Nel, to use the e-mail as the basis to do a Stratcom-like propaganda lynch job on me. As it turned out the journalist removed the name of the so-called ‘reader’, and forwarded the e-mail to me.

See the screen grab of Nel’s WhatsApp message, in which he forwarded the e-mail to me: 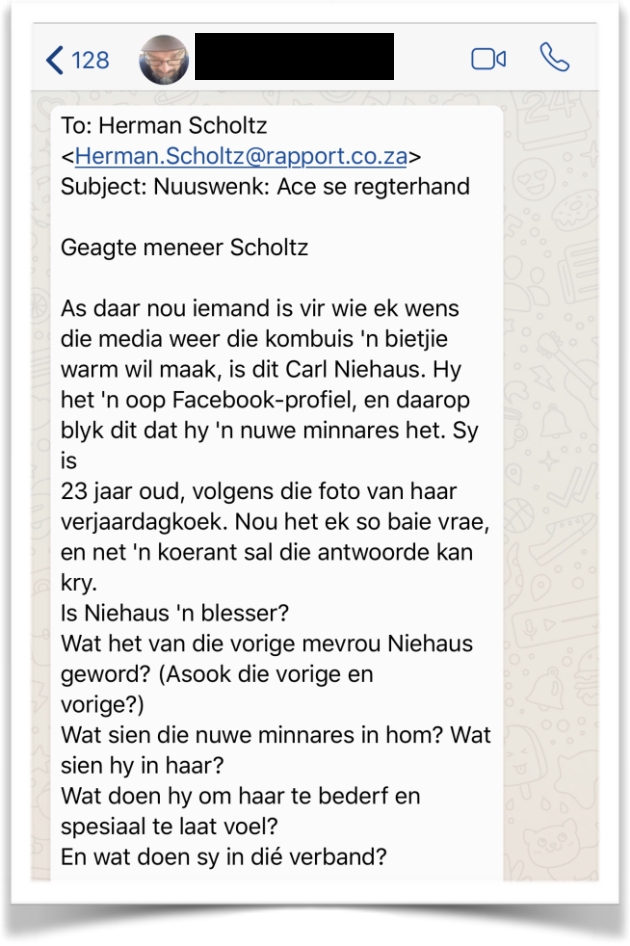 Nel also called me and claimed that he was appalled by what he was instructed to do, and asked that I must please talk to him, so that he could try to rather make a ‘nice article’ of it. He also wrote the following to me on WhatsApp about the e-mail in question.

(I provide a screen grab of his Afrikaans message, and an English translation): 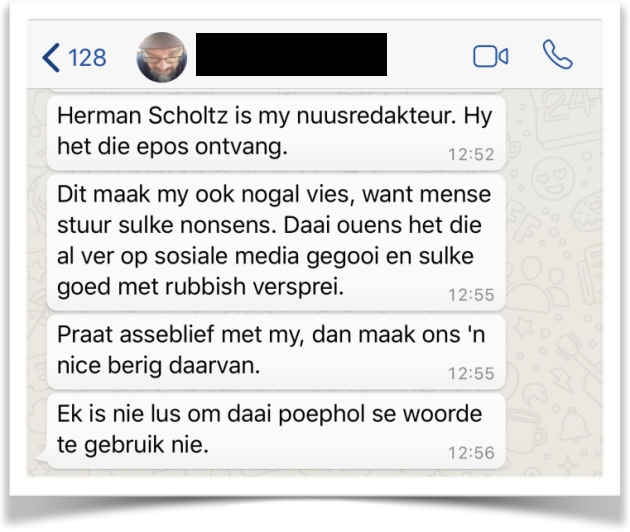 "Herman Scholtz is my news editor. He received the e-mail.

It makes me quiet pissed oﬀ that people sends such nonsense. These guys already went wild on social media and distributed such rubbish.

Please talk to me, then we can make a nice article of it.

I do not want to use these asshole's (poephol se) words."

Based on my previous experiences with Rapport, and Media24 in general, that they have consistently always written negative propaganda pieces about me, I had absolutely no reason to trust Nel that he was in fact intending to write a ‘nice article’. It could very well be that he was just saying and writing these things to me to get me to co-operate and talk to him, in order to legitimize the propaganda lynch job that he was told to produce. I therefore refused to be drawn into such an engagement, and refused to co-operate with him about the article that he was instructed to write.

On Friday, I posted on social media (both on Facebook and Twitter) the following message, and waited to see what Rapport was going to publish... 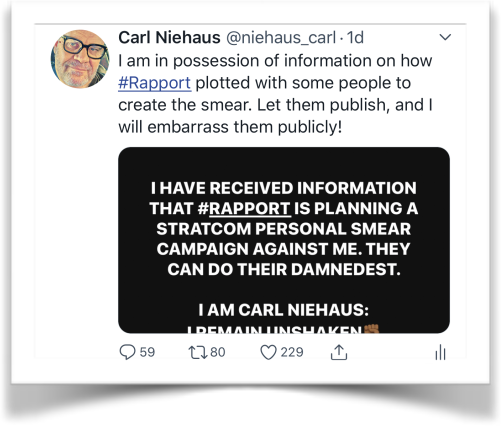 And of course, true to character, Rapport did publish the planned article.

As it turned out, it seems that Nel did feel some twinge of conscience about the propaganda lynch job that he had been instructed by Scholtz to carry out - so he did a bit of a watered down lynch job, but he still did what he was instructed to do ... (I suppose he had to listen to his boss the News Editor, and also has a job to try and keep. One cannot help but to feel some sympathy for these poor journalists, who are the propaganda tools of the White Monopoloy Capital (WMC) media propaganda machines, and literally prostitute themselves for their livelihoods. But my sympathy is limited, because they can always follow their conscience, and refuse to do so and resign, but they hardly ever do ...).

This kind of hack journalism is wrong on every possible level:

1. A ‘reader’ does not like me, and he wants to settle scores by “making the kitchen hot for [me] again” (the verbatim words of the ‘reader’ who wrote to Herman Scholtz), and as the news editor Scholtz was just too happy to oblige. Some ‘news editor’ this guy is! This is not journalism, it is the conduct of a pathetic hack, who is just too happy to carry out an instructed character assisination.

2. We must ask ourselves is this general modus operandi of Rapport, and how the propaganda stories that they dish up to us every Sunday orginate? So Rapport does not practice journalism, it is a rag to be used and abused by those who want to settle scores with those they perceive as their enemies??

3. The question must also be asked if the origin/background of this so-called ‘reader’ that Scholtz was all too happy to oblige was investigated? How does Scholtz know that he was not being used by some intelligence agency (either local or international - or probably both) in a carefully crafted propaganda plan to carry out a continuing project to character assassinate me, and in the process also to attack my loved ones? (I have compelling evidence that this is the case (which I will reveal at the appropriate time). Or is it that Scholtz knows this very well, and is actually all too happy to provide the proverbial helping hand? With Rapport and Media24’s pathetic history as propaganda tools of White Monopoly Capital (WMC) this is actually very likely.

4. A young adult woman who is my partner, and also my 10 year old daughter, have been attacked in the most disgusting and vicious manner on social media (both on Facebook and Twitter), after I simply wished them both happy birthdays. Apparently these two defenseless women were considered ‘fair game’ by some of those who do not like me, and my political views.

5. This is sadly the sexist and paternalistic abusive society that we live in! A society in which the wanton abuse, and femicide and killing of children (especially girl children) are rife, and where women can be disrespected and abused even, and only, in order to attack another man! Apparently to these brutes it is perfectly justifiable to turn a young adult woman, and 10 year old girl, into collateral damage in their perverse determination to at all costs destroy me. Instead of taking a principled stand against such abusive behaviour Rapport saw it fit to jump onto the very same sexist and abusive bandwagon, in order to get to me as a target that had been identified, and presented, to them. Herman Scholtz and his team of Rapport/News24 hacks should be ashamed of themselves!

Issued by Carl Niehaus in his personal capacity, 13 October 2019

Sunday Times: I will not be silenced! - Carl Niehaus

I did not meet with Mkhwebane – Carl Niehaus

Thinking about state failure (I)

Thinking about state failure (I)

Distell delivers as consumers beat Covid with the bottle