SA rainfall in 2015 the lowest on record - SAWS

2015 was indeed a very dry year in South Africa

The South African Weather Service has compiled a dataset of monthly average rainfall per province for all 9 provinces dating back to 1904. This dataset was used to calculate the annual total rainfall (Jan – Dec) for South Africa over the 112-year period from 1904 to 2015. The data was analysed and revealed very interesting information.

The annual average rainfall for South Africa, calculated over the full 112 years, is 608 mm.

The longest period of consecutive years where the annual total rainfall was below the period average of 608 mm per annum, was the 6 years starting in 1944. If an annual average is calculated for this 6-year period, it is 544 mm.

The next longest period where the annual total rainfall was below the period average of 608 mm per annum, were 2 periods of 4 consecutive years each.

Although the annual total rainfall for South Africa for the 12 months Jan – Dec 2015, was the lowest annual total since 1904, the 4-year period 1930 – 1933 might still be the driest continuous period experienced in South Africa. 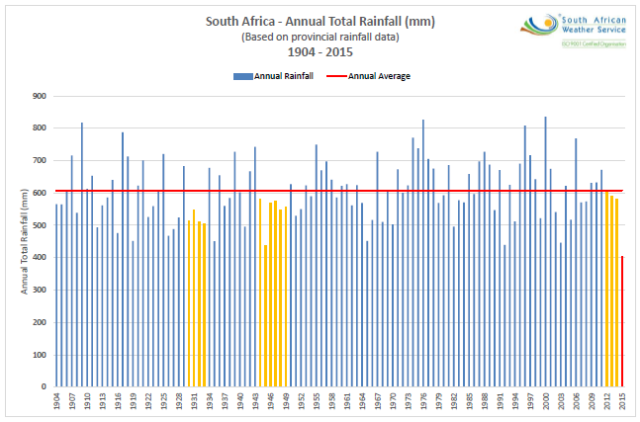 Zimbabwe: The effect of the drought