SA's media: The old is dying, the new is struggling to be born

The state of our newspapers, in print and online, in seven tables and charts

The recent release of the Audit Bureau of Circulations' figures for the second quarter of 2013 were reported as containing yet more bad news for South Africa's newspapers. In its report on the figures Business Day stated that SA newspapers "remain under intense pressure" while the Grubstreet website noted that there was "blood on the floor in the most recent set of print sales figures."

The following seven tables and charts document, firstly, the changing circulation of South Africa's newspapers according to the ABC; and, secondly, the extent to which the loss of print readership has been made up for online by South Africa's big newspaper publishing houses.

The total circulation figure in the Audit Bureau of Circulations data contains a number of sub-sections. These include: Individual, Business and Travel & Commercial subscriptions, Copy Sales, Digital Editions, Third Party Bulk, Print Media in Education (PMIE) and Sales Below 50% of the cover price.

In the Travel, Bulk and PMIE categories the newspaper is "bought" by a third party and then (allegedly) handed out to individuals, who do not pay for it. These categories have often been used by publishers to prop up or inflate newspaper circulations. The addition and later subtraction of newspapers "sold" under these categories tends to distort trends over time. It also complicates comparisons between the newspapers of different groups, as the Media24 (Naspers) publications seldom claim any sales in these categories.

In tracking the actual paid for readership of a publication it is better to focus then purely on core circulation -copy sales plus individual, business and lately digital subscriptions. Table 1 is a list of the core circulation of 45 South African newspapers in the 2nd Quarter of 2013, according to the latest data from the Audit Bureau of Circulations, along with the change in core-circulation over a one-year and three-year period. (Note: The Daily Voice and The New Age are not registered with the ABC and so are not listed.)

As can be seen from the table a newspaper is doing exceptionally well if it can marginally increase core-circulation. Only three of these newspapers recorded increases year-on-year: The Saturday and Sunday editions of the Zulu-language newspaper Isolezwe (owned by Independent News and Media SA) and The Times. The Times falls under the hybrid category as it is given away for free to Sunday Times subscribers. It is also sold to the public for the nominal price of R1. The newspaper recorded a 5% increase in these copy sales.

A newspaper did well if it limited its decline to under 5 percent year-on-year. Twelve newspapers fell into this category with another 14 recording declines of between 5 percent and 10 percent. 16 papers recorded core-circulation declines of over 10 percent.

The changes in core-circulation of these newspapers over the past seven years - excluding The Times, M&G and Ilanga - are illustrated in the four graphs below.

As can be seen from Graph 1 almost all the non-Zulu Sunday publications have suffered from declining circulations over the past five years. The one exception is theSunday Times which, after an initial decline, has reported a curiously stable core circulation over the past few years. 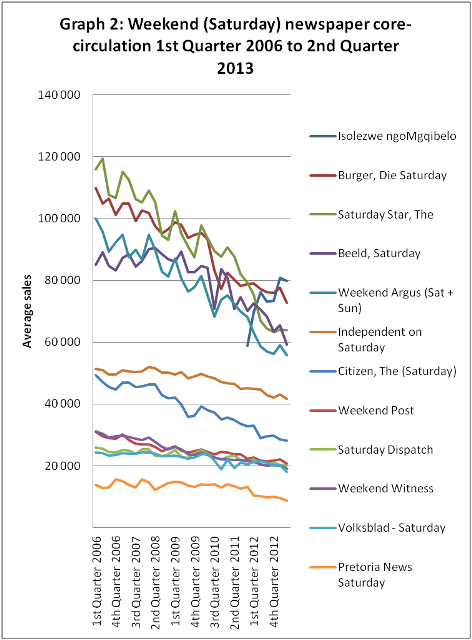 Graph 3 illustrates the changes in circulation of the "tabloid" dailies. The Daily Sun has suffered a significant decline in core circulation over the past few years. It nonetheless remains South Africa's largest daily newspaper by a huge margin. 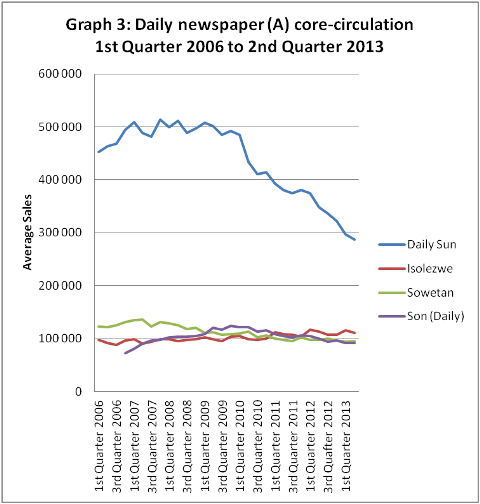 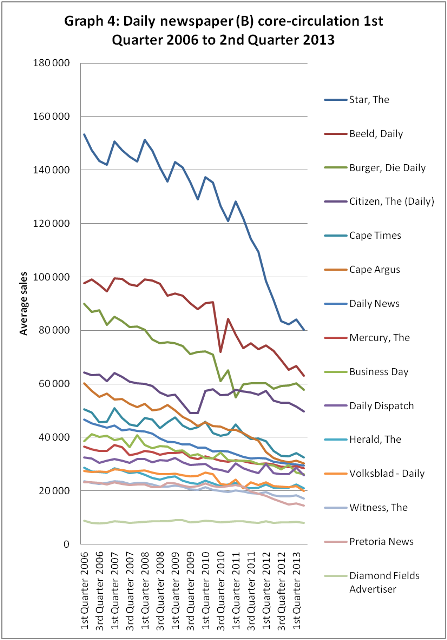 On the assumption that many readers are moving from "print" to online the next question is how the big newspaper publishers are doing on the web. Here the most appropriate measure is the average daily (not monthly) online South African readership by Unique Browsers for publishers and their publications.

According to data collected by Effective Measure on behalf of the Digital Media and Marketing Association (DMMA) Media24 has by far the largest online readership of the big newspaper houses. Its websites - excluding those of its magazine division, which are recorded separately - were visited by an average of just over half a million Unique Browsers a day in July 2013. The Times Media Group websites had the next largest following, followed by Independent News and Media South Africa, then the Mail & Guardian and then Caxton. See Graph 5 below. 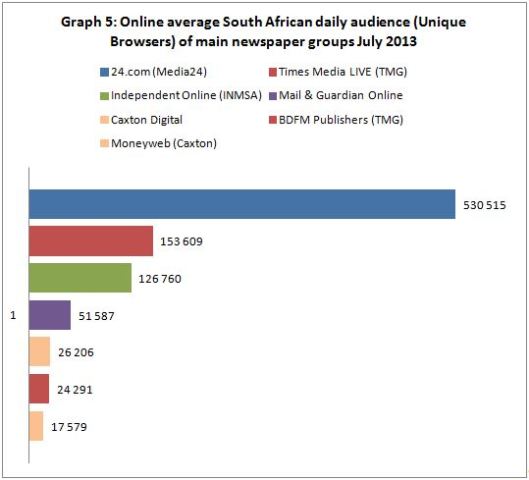 Finally, Table 2 contains the average daily South African online readership in July, by Unique Browser, of certain selected news websites. Media24's News24.com is by far the largest of these publications. The individual newspapers in the group have also built up dedicated followings - with Beeld's Beeld.com the largest of these. The Times Media Group's newspapers Business Day, The Times and The Sowetan have all built up substantial daily online readerships - through BDLive, TimesLive and SowetanLive respectively.

The Independent group, however, has a relatively weak online presence given its print footprint. The daily readership of the IOL.co.za website is a third the size of News24.com. Moreover, its individual titles have failed to build up significant online followings.