JOHANNESBURG - The pursuit of race and gender representivity on the bench has been an obsession of the African National Congress since October 1998. For a brief period, during Enver Surty's term justice minister, the expertise and experience of individual applicants for judicial office was given greater weight.

However, under the direction of the new Minister of Justice, Jeff Radebe, and his allies on the JSC, the primary consideration in the choosing judges is (once again) the attainment of a judiciary which reflects the race and gender proportions of the total population.

This is because judges are not appointed from the general population, but from the ranks of those with (at the very least) a legal qualification. When measured against the appropriate yardstick - the proportion they take up of the legal profession - white South Africans are now severely underrepresented on the bench. As of July 2009 44,1% of judges were white. This is considerably less than their percentage of the advocates profession (75,6%) and the attorney's profession (73,7%). See graph and tables below. 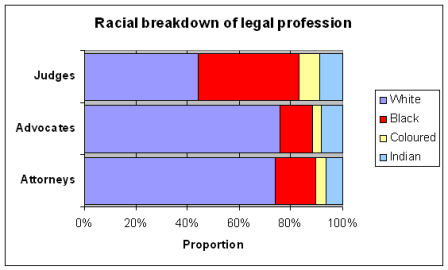 Why do Westerners get it so wrong?

Johann Kriegler on the JSC vs judicial independence

Will SA’s future be bleak or prosperous?

Omicron variant risks infecting vaccinated people, may not cause severe illness – with insight from The Wall Street Journal

The Daily Insider: Why Buffett calls compounding the Eighth Wonder of the World