Publication traces, identifies, exposes and forces into joblessness the author of its humiliation

The Huffington Post South Africa has outed the author of the hoax “Shelley Garland” blog post – calling for the disenfranchisement and dispossession of white men across the world - as Marius Roodt, a researcher with the Centre for Development and Enterprise (CDE). On Wednesday afternoon a group made up of Pieter du Toit, Deputy Editor, Ferial Haffajee, Editor-at-large, and Pontsho Mabena, Video Editor, confronted Roodt at the CDE’s offices in Johannesburg after they had “digitally traced” the email address he had used to contact their publication back to him, and confirmed his identity with “facial recognition technology.”

A video of Haffajee and Du Toit’s interrogation of an apologetic Roodt, in a CDE meeting room, was posted on the HuffPost SA website. In it Roodt denied that he had intended to target editor Verashni Pillay specifically in any way. Du Toit put it to Roodt that HuffPostSA’s unwitting publication of Roodt’s satire had “led to a white twitter outcry” and “some terrible things being said about South Africans across the board and terrible things being said personally about our colleagues and the title we work for and the company we work for.” Du Toit added that although this did not exonerate HuffPost SA it had “led to a lot of damage and a lot of hurt”. A visibly angry Ferial Haffajee put it to Roodt that he had been a “’bit of a doos’”.

Roodt consequently tendered his resignation to the CDE on Wednesday, and it was accepted with immediate effect by CEO Ann Bernstein.

On the 29th March Roodt had, after failing to interest the Daily Maverick in his proposal, written to the Huffington Post South Africa under the Garland pseudonym, asking if they would be interested in an article exploring the suggestion that white men should “be stripped of the franchise” given that the white male vote had given the world Trump, Brexit and a number of DA-controlled metros. In this email, written using a Yahoo.co.za email address, “Garland” described herself as a UCT student completing an MA in philosophy with an emphasis on feminist thought.

The following day the HuffPost SA wrote back to thank Garland for her pitch stating “we would love to run a piece like that.” Roodt then sent through an article on the topic under the Garland pseudonym as well as a picture of himself dressed in drag, and a brief bio stating that when Garland is “not gagging at South Africa’s unique brand of rainbow politics, she’s working on ways to smash the patriarchy.”

The article itself appeared on the HuffPost SA website on Thursday the 13th of April. The piece tacked together common racial tropes habitually directed against the white minority in South Africa by racially-minded journalists, editors, opinion-formers and politicians, and referenced the inaccurate statistics often employed by such people. The article then took their stance to its logical, but absurd and comic extreme by calling for all white men on the planet to be stripped of the vote for a generation, so that their “oppressive power” could be broken, and the wealth they had acquired through theft and violence, could be returned to the “rightful” owners.

“Some may argue that this is unfair”, the article stated, “Let's be clear, it may be unfair, but a moratorium on the franchise for white males for a period of between 20 and 30 years is a small price to pay for the pain inflicted by white males on others, particularly those with black, female-identifying bodies.”

Once the article went viral – particularly after being picked by the conservative media in the United States – Verashni Pillay wrote a piece defending Garland’s views and accusing those protesting its publication of “a very poor reading of the article - or perhaps none at all.” She added that “Those who have held undue power granted to them by patriarchy must lose it for us to be truly equal. This seems blindingly obvious to us.”

After it became evident that Garland was a pseudonym HuffPost SA pulled the article, and deleted Pillay’s defence of its inflammatory content. Media24 announced that there would be an investigation. Roodt meanwhile contacted Roman Cabanac of the Renegade Report to explain why he had carried out the hoax – though he requested continued anonymity - explaining that he wanted “to show that one can write absurd racist and sexist hogwash, as long as the target is the right one.”

This is an apparent reference to the race-baiting of the country's ageing and declining white minority - who currently constitute under 9% of the total population - which has become something of a national sport across much of the South African media.

Roughly speaking this involves, on the one hand, trying to mobilise outrage against – and, if possible, hound out of employment - any a.) prominent and b.) impertinent white individual who slips-up and makes a poorly worded or clumsily formulated statement that could vaguely be (mis)construed as “racist” against the black majority. On the other hand, the participants compete in publishing ever more strident racial rhetoric - and calls for action - against the white minority as a class.

In an article published after Roodt’s exposure and the loss of his job Pillay said she felt “a deep and almost crippling sorrow. Sorrow, because at first glance he looked like someone I could be friends with. But mostly, sorrow that this happened on my watch.” Among the things that “went wrong” were that if Garland had been a real person the article “required far more robust discussion in the newsroom and very careful framing if we did decide to publish it” and she had failed to make it clear enough in her initial response “that I absolutely do not agree with the disenfranchisement of any group of people. I don't hate white men.”

Pillay added that “there's a deeper sorrow at play here for me: our lack of racial healing…. Because I believe in healing. This, ultimately, is what I want us to strive for as a country in our race relations. But to get to that place, I felt we've needed to be far more honest with each other about our respective pain and privilege as black and white South Africa than we have been.”

The Huffington Post SA's front page report on its triumph: 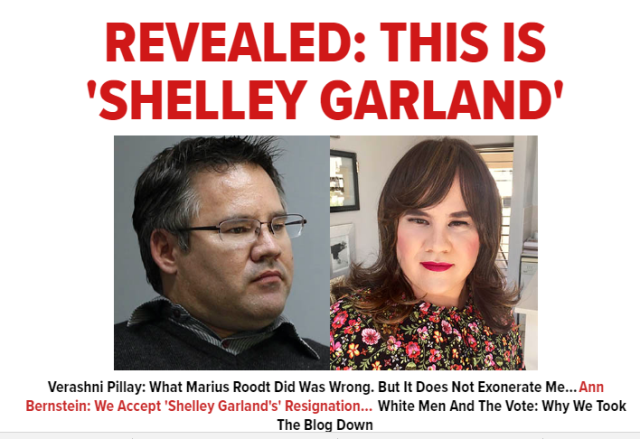 We had nothing to do with hoax of HuffPost - CDE

HuffPost SA: Bonfire of the reputations