Last Sunday Gaobuse Montsho (36) of zone 1 at Itsoseng, near Lichtenburg in the North West, got into an argument about money. Gaobuse, who worked as a cleaner at a local company, usually brought home his R400 wages on Fridays. But last week he slept over for two days and only brought R150.

There was a violent argument with his 63-year-old lover and neighbours and cops were alerted. Paramedics rushed to the scene but Gaobuse had been stabbed to death. Speaking to Daily Sun, Baile Montsho (39), the dead man's sister, said: "I am angry with my brother because for a very long time I have advised him to end his relationship with this woman who is too old for him. But he couldn't."

Gaobuse was a father of two and a breadwinner at home. Police Sergeant Kelebogile Molale told Daily Sun: "A woman was arrested and charged with murder. She appeared in the Itsoseng Magistrates Court on Tuesday and was released on R500 bail.

"She will appear again on 9 December."

Daily Sun spoke to the sugar mummy. She sobbed: "I lived with him for 13 years and had no reason to kill him. It was all a mistake and I regret everything that happened." 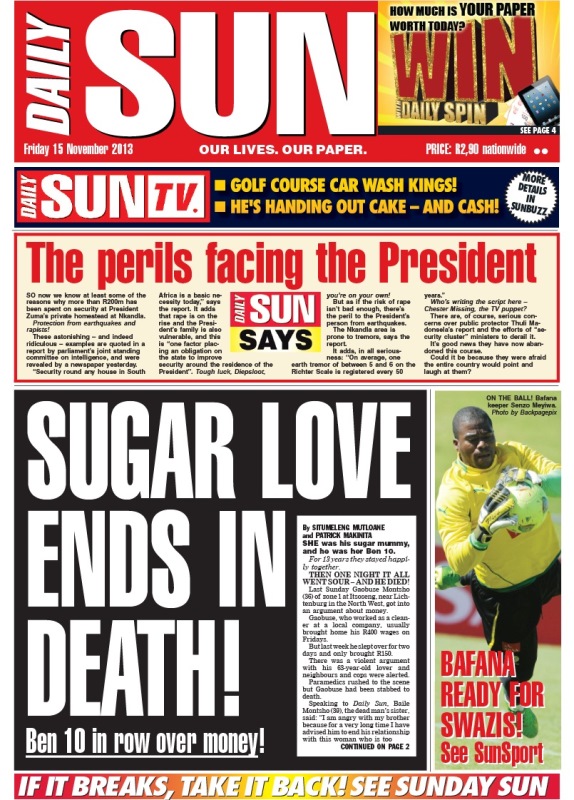 The Daily Sun is South Africa's largest daily newspaper with an average circulation of 287 222 (Audit Bureau of Circulations 2nd Quarter 2013) and a readership of 5.7m (as per AMPS 2012ab). Its Facebook page can be accessed here. It can be followed on Twitter here. To find about advertising on the Daily Sun click here.

"Stalked by a strangler!" - Daily Sun