The Census: Some more questions

Briefing note for journalists: Inconsistencies in the data from the Post-Enumeration Survey (PES) report

We have identified a number of what appear to be inconsistencies in the report on the Post-Enumeration Survey (PES) released by Statistics South Africa (Stats SA) on 7 November. Based on the arguments set out below, we sought to get Stats SA to either rectify the numbers or to explain to us where our reasoning was wrong, to avoid further public debate, but to no avail. We discuss these inconsistencies below, setting out the nature of our concerns, their implications, as well as why we believe that their resolution is important to one's ability to interpret and understand the 2011 census.

It is commonly believed that the census is a count of the number of people in the country - it is not. It is, at least in South Africa, an estimate of the size of the population. Following the census, Stats SA carries out a (relatively) small survey, the Post Enumeration Survey (PES), of 600 enumeration areas (from a total of over 100,000 in 2011), to evaluate how well the census counted the people and recorded basic information such as age, sex and population group.

However, because this estimate is derived from a small sample there is some statistical uncertainty about the estimate of the extent of the undercount, and hence about the actual number of people in the country on census night. Thus, according to Table 14 of the published report on the PES we can be reasonably sure (i.e. there is a 95% probability) that the true number of people at the time of the census was somewhere between 49.8 and 53.7 million people.

However, in 2011 (shown on the right hand side) there is no such relationship (the correlation is barely 33%), which suggests that the published data cannot be correct. (Here relative uncertainty is measured by what is known as the ‘coefficient of variation', i.e. the standard deviation divided by the mean. The derivation of these measures is set out in the Annexure.)

These anomalies are particularly stark when considering the Western Cape, Gauteng and KwaZulu-Natal. These provinces have the lowest relative uncertainty in the estimate of the population and yet a wide range of relative uncertainty about the undercount. And in the case of some of the other provinces the uncertainty is very high. For example, in the case of the Northern Cape this uncertainty extends to plus or minus 14% around the estimated population. Such a wide range of uncertainty in the population nationally and provincially should raise concerns about the reliability of these numbers to be used in determining, for example, the Equitable Share.

Another result of this is that whereas the 95% confidence interval around the estimate of the population in 2001, with a greater undercount than 2011, was plus or minus 392,000, in 2011 the uncertainty is apparently plus or minus 2 million!

We also raised several concerns about the data on households in the census. These include:

Response from the Statistics South Africa

The initial response from the Statistician General (SG) to our queries was to ask for six days "to personally deal with the questions and give them my undivided attention", but he nevertheless assured us that he remained "confident that the figures would remain as they are".

When, after 8 days, we had had no response we emailed the SG again and were told, with little evidence of any further investigation or serious effort to engage with the logic of our principal arguments, that there was "absolutely nothing wrong with the adjustment factors" and that "there are no errors in the data".

Finally, the issues we have already raised in the media (for example, about the rather odd age distribution of the population under the age of 19; the implications of this for the national trend in fertility over the last 15 years; as well as the consistency of the estimates of the provincial populations) remain.

Annexure: Relative uncertainty around the national and provincial estimates of population and undercount 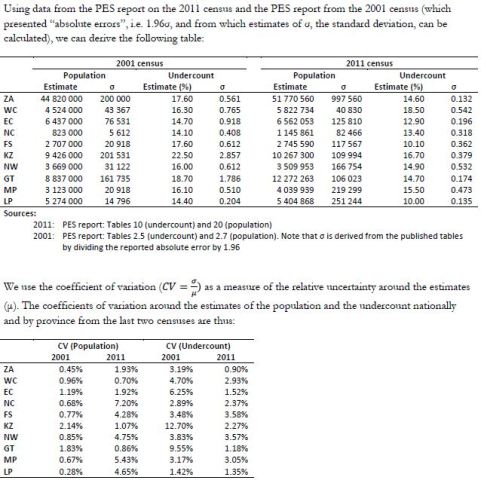 South Africa cries with laughter – the power of satire