The DA's Cape Town story: Is it all true?

Is the DA telling a true story about infant mortality?

The Democratic Alliance (DA) has released a report titled The Cape Town Story. It makes a strong case that before the DA took over Cape Town in April 2006, the city was ineptly run. The DA has turned things around. "The City of Cape Town has delivered a better life for all," it says. The press statement accompanying the report's release states, "The people of Cape Town already know much of the Cape Town Story. They know the difference that DA government has made in their lives. That is why they gave us an outright majority in the 2009 provincial election." It goes on, "Cape Town is today recognised as the best performing metro in the country."

On the face of it, it's all plausible. Who can honestly deny that the city was poorly administrated under the ANC? And who can deny the DA's commitment to stamping out corruption and good governance? It's not surprising that journalists and academics have for the most part been uncritical of the DA's claims. The ANC has become so complacent that its propaganda machine is unable to spot when the official opposition is being more than a touch frugal with the truth.

We will not comment on all the claims made in the Cape Town Story, many of which need to be further scrutinised.  We will focus on what is arguably one of the most important measures of whether socio-economic conditions are improving: infant mortality.

It would have been nice if a primary source for such an important claim was supplied in The Story of Cape Town. But unfortunately, the reference is to a speech by James Vos, chair of the health portfolio committee on 4 January 2011. We cannot find the speech online.

This infant mortality statistic appears to be a misrepresentation. It's probably not an outright lie; it's just fails to tell the story properly. It's more like a politician's lie. And properly told, the publicly available data we have, which is from the City of Cape Town, shows that the DA definitely cannot claim responsibility for a decline in child mortality in the city, and may in fact have some explaining to do. 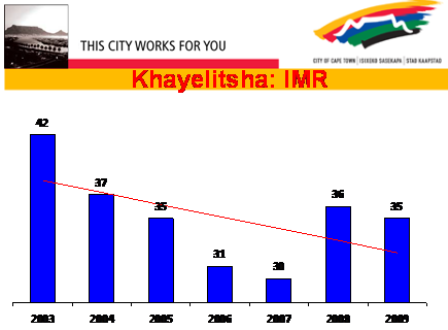 HIV has played havoc with infant mortality. The introduction of mother-to-child transmission prevention and antiretroviral treatment were the likely causes of the drop in infant mortality from 2003 to 2007. But other data from the City of Cape Town shows that it is gastric diseases, not HIV which has caused the recent spike in mortality in Khayelitsha. 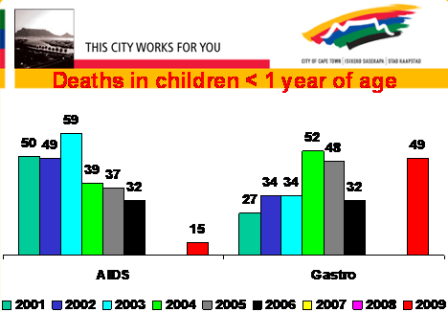 Figure two: Gastric diseases are becoming a bigger cause of death. AIDS is declining. It is possible there is a link between the two. Source: City of Cape Town.

What is causing this is uncertain. It is not implausible that it points to poorly maintained and ageing sanitation infrastructure in Khayelitsha, which is a local government responsibility, Another speculation is that statistics gathering in the city is inconsistent and we actually cannot compare data between years. It might even be an insignificant random fluctuation. But whatever it is, it unequivocally does not follow from it that infant mortality in Cape Town has decreased.

We also have not seen data aggregated for the whole city, but Khayelitsha is arguably a fair indicator given its large size and that it carries Cape Town's major burden of disease.

If the Cape Town Story has misrepresented this important statistic, it brings into question  what other areas in the report may be misrepresented.  Hopefuly this analysis convinces newspapers and magazines to get their journalists to scrutinise the entire report very closely.

Since publishing in the Cape Times we have researched further. Here is a graph from the City of Cape Town which breaks down infant mortality by district and the entire city. 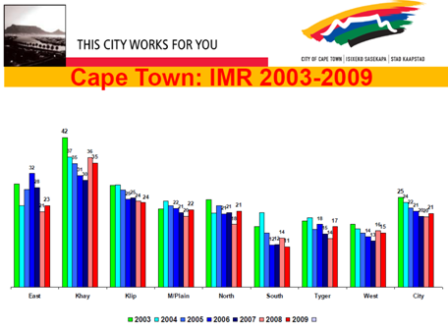 Infant mortality for the city is the same in 2006, the year the DA took power, and in 2009: 21 per 1,000. There was a decline from 2003 to 2007 from 25 to 20 but this appears to have stabilised. Khayelitsha shows a concerning spike. There is possibly too little data here to draw any hard conclusions.

But there is no way that this data indicates an improvement in infant mortality under the DA.

For much of the last decade, there have been excellent people trying to improve health in Cape Town, including (to list a few) Virginia Azevedo, the late Ivan Toms, the staff of Medecins Sans Frontieres and the various city health facilities, researchers in public health at the three major universities and the members of TAC Khayelitsha (who distribute thousands of condoms monthly). They have worked under both DA and ANC governments. Whatever achievements have been made -and there have been considerable ones-- the kudos belong to them, not to any one political party.

Finally, we have been criticised for pointing out the DA's faults and not the ANC's ones. Our track records criticising the national government over the last decade show this criticism to be ridiculous. Nevertheless we work in Cape Town and this city's government is a DA one. We hold it to account as we would hold an ANC one to account. We hope that in responding to us, the DA will admit its error and not react with irrelevant defensiveness.

Nathan Geffen is TAC Treasurer and Gavin Silber SJC Co-ordinator. This is an extended version of an article that appeared in the Cape Times on 31 March 2011