The ‘land question’ from the point of view of the land

Garry Paterson explains why, although South Africa is such a large country, there is so little usable arable land

Land is an emotive issue in South Africa, for a variety of political, economic and other reasons. However, it is important to understand some of the aspects relating to the potential quality of the land before coming to any conclusion or taking any decision regarding its possible use.

Land can be used for virtually any purpose, but this article will focus mainly on the agricultural aspects of land. This is important because the range of possible agricultural enterprises is directly and specifically limited by the various land characteristics, as well as the fact that, for optimum food security in South Africa at all levels of production, the sustainable use of the natural resources is essential.

Land generally comprises several components and is not just the surface of the earth that we see, walk and drive on every day. The most important component is the soil itself. Extending downwards from the surface, a soil profile consists of a topsoil horizon (layer), with a number of subsoil horizons beneath, until the underlying parent material is reached at depth. This depth may vary from a few centimetres (in dry areas such as the Karoo) to several metres (such as in alluvial deposits and deeply weathered areas such as KwaZulu-Natal) and will vary widely over even a short distance.

The factors that determine whether a soil will be productive for agriculture will include the soil depth (which provides the plant rooting zone), structure (how the soil particles or blocks are arranged), texture (which determines how slowly or rapidly water will move through the soil profile), pH (which indicates how acidic or alkaline is the soil) and a variety of other physical, chemical and mineralogical properties.

However, even for the most suitable soil for agriculture, the second determining factor will be the climate. This has several components, but the two most important are the heat conditions (including temperature and frost) and the moisture conditions (including rainfall and evaporation), which will vary from crop to crop. In addition, the significant annual and intra-seasonal variation in climate means that even areas with the most favourable climate often experience periods of drought, floods, heat or other detrimental conditions.

These soil and climate factors will largely determine whether crops can successfully be grown at a specific location. Along with various terrain features (such as the slope angle and the landscape position), these natural resources will contribute to the suitability of land for various forms of production.

In South Africa, there is a shortage of suitable land for rain-fed arable agriculture. If one considers that the average soil depth across the country is around 450 mm and that the average annual rainfall is around 470 mm, it is clear that there are significant limitations.

The world average for rainfall is around 980 mm per annum, while most crops require around 750 mm or more of soil for optimum yields, so the relatively poor situation in South Africa is clear to see. We have soil information at 1:250 000 scale for the whole country, as well as detailed topographical maps and an extensive network of long-term weather stations, so it is not difficult to assess the distribution of the various classes of land across the country.

South Africa comprises around 122 million hectares, but due to the restrictions outlined above, only around 14% is potentially arable and only around 2% is considered as having moderate to high potential.

The most widely applied means of assessing this suitability is by using the concept of land capability. This is a system first formulated in the USA, whereby land is divided into one of eight classes, so that progressively more restrictions (in terms of soil, climate and/or terrain) apply to poorer quality land. The summarized descriptions can be shown as follows:

Class 1 – virtually no restrictions, virtually all crops can be grown successfully

Class 3 – moderate limitations, only certain crops can be grown

Class 4 – very severe limitations, cultivation only possible with care and at cost

Class 8 – areas such as bare rock or permanent wetlands, where no utilization is possible

From the above descriptions, it can be seen that Class 1 and 2 land is the best for arable agriculture, Class 3 (and occasionally Class 4) land has restricted potential, Class 5 and 6 land comprises most of the grazing land, while Class 7 and 8 land should be left in the natural state. In order to obtain economic crop yields, in most cases only Class 1 and 2 land should be used. If Class 3 land is used, the limitations (such as shallower soil, more risky climate etc) mean that in most years, the yield reduction will be such that it may be difficult to sustainably make a living. This will naturally vary from crop to crop, and specialists in agronomy and in agricultural economics would need to be consulted.

The original land capability mapping exercise used the combined soil entries for each mapping unit, so that the dominant class per unit could be determined, but it is also possible to add up all the entries per class individually, as well as to compare “Land Capability” (including climatic restrictions) with “Soil Capability” (where only soil factors are assessed). The results for South Africa are shown below. 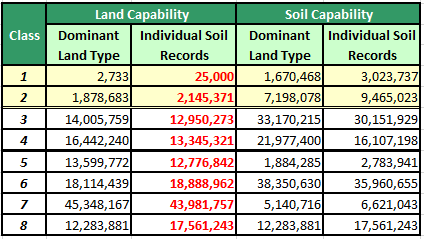 From the table, it can be seen that when mapping units with dominant Class 1 and Class 2 soils are used, the combined area is less than 1.9 million ha. When each individual entry is considered, the area increases to over 2.1 million ha. However, the restricting influence of climate in can clearly be seen in the last two columns. If soil factors only are considered, South Africa has almost 9 million ha where mapping units occur with Class 1 and 2 soils dominant. When each individual soil entry is assessed, that area increases to almost 12.5 million ha.

This means that South Africa has around 10 million ha of excellent agricultural soils, but where the climatic restrictions (mainly low rainfall) mean that they cannot be utilized for cultivation. If one assumes that possibly 1 million or so of these soils are in areas where they can be irrigated, it is clear that there is still a significant area of high potential soils that cannot be utilized.

If the summarized figures (in red in Table 1) are shown per province, the breakdown (slightly different to Table 1 due to data extraction methodology) is as follows:

If it seems that the percentages of good quality land are lower than expected, it should be remembered that soil and climatic factors are taken into consideration, as well as indicators of various long-term susceptibility hazards, such as wind or water erosion, crusting, acidification and salinization.

The map below shows the distribution of the areas with Class 1 and Class 2 land. From the map, it can clearly be seen that the Class 1 and 2 land is restricted largely to parts of the highveld, with some Class 3 land occurring there and in the Western Cape. There is a clear line running through the middle of the country, which more or less corresponds to the 550 mm isohyet (rainfall contour), so that the whole of the western half of South Africa has Class 5, 6 or 7 land, which is totally unsuited to cultivation. 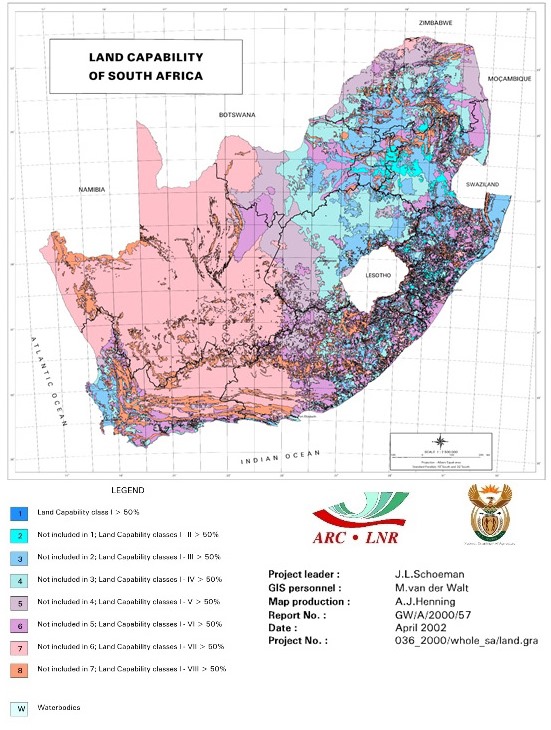 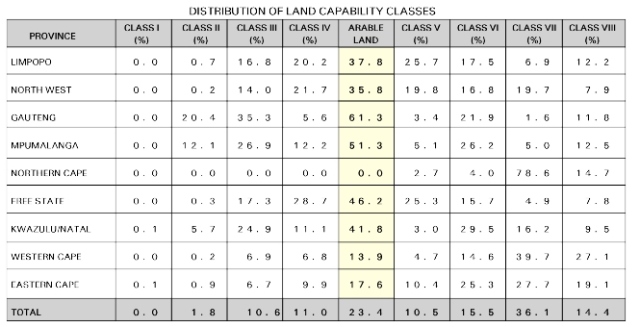 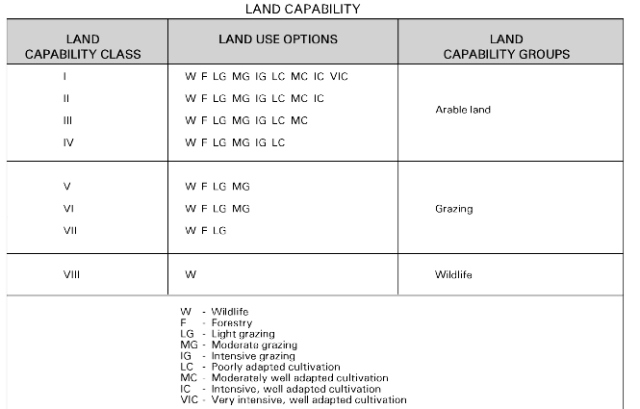 So now we have looked at land in South Africa from an agricultural standpoint, it is important to further understand the consequences of neglecting or misusing the land. There are four main ways in which land can be damaged or otherwise rendered unsuitable for agricultural or environmental use. The first action would be by excavation or other disturbance of the soil.

This would be the typical scenario for many mining processes, and it is an unfortunate fact that more than 90% of South Africa’s coal reserves lie under the high potential soils of the eastern Highveld, which makes up a large part of the “maize triangle” that is vital to South African agriculture. These reserves are almost all extracted by open-cast methods, so that even with rehabilitation, the soils are generally permanently lost as high quality arable soils.

The second type of degradation is simply loss by construction where the expansion of human settlement (such as urbanization) covers over otherwise productive land in and around existing urban sites. This is especially important due to the proximity to markets and the potential contribution to urban food security. A third type of degradation is pollution, usually by some sort of chemical seepage in solution, which, if it infiltrates the soil and/or groundwater, is almost impossible to remove or counteract. Finally, the scourge of soil erosion affects many areas of South Africa, especially the poorer areas where a lack of knowledge, coupled with economic pressure, leads to inappropriate or damaging land use, often on steeply sloping terrain. This is often characterized by the removal of surface vegetation (either by cultivation or by overgrazing), so that the fragile subsoil is exposed to the forces of wind and rain, leading to soil removal, which is not only damaging, but usually permanent.

The photo below shows a good example of how an improperly used stream in an area of erodible soils has extended upwards, threatening both agricultural fields and a road. 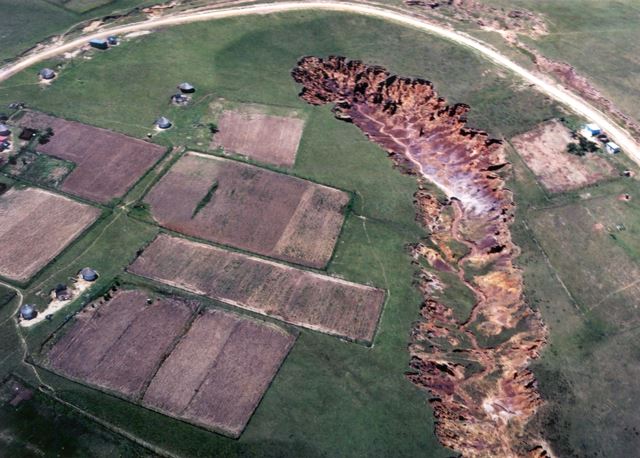 In 2000, the national Land Cover survey concluded that more than 4% of South African land could be classed as “degraded”. Given the fragility of much of the soils in South Africa, it is vital that for any decision that is taken regarding land use, an integral part of the decision-making process should be a comprehensive land evaluation exercise.

This should include a soil survey, to determine the practices that the land in question can sustainably support, where cultivation an take place (and where it should not occur) to help ensure that the land has the best possible chance to be used properly to the maximum benefit of the users. Sadly, this is not always happening, so that many areas are completely misused, especially over the longer term.

This leads on to the concept of climate change, which may be a controversial topic, but which is one that needs to be considered. If climatic conditions in South Africa change in future, it will be imperative to know how this will impact on food production. Luckily, we have the knowledge concerning the distribution of various climatic conditions, as well as soil types, so that a range of scenarios can be considered to help authorities with their awareness and planning.

So what is the take home message regarding land in South Africa? It is simply this - the country faces an uncertain future with factors such as increasing population pressure, energy demand, possible changing climate and political demands, such as land restitution. Through all of this, the land itself is limited in extent and can only be sustainably used for those purposes that the specific land characteristics allow. If we ignore this, and fail to carry out sensible land evaluation, it will be a problem not only for our generation, but for many generations to come.

Dr Garry Paterson is a senior researcher at the Agricultural Research Council-Institute for Soil, Climate and water in Pretoria.

Malema, Piketty and the ‘land in black hands’