Note: This is the second in a two part series on the land question in South Africa. The first, which deals with the racial divison of the land through the 1913 Natives Land Act, can be found here.

In his budget vote speech in February this year Minister of Rural Development and Land Reform Gugile Nkwinti noted that in order to attain the 30% target by 2014 24.5m of 82m hectares (ha) "of agricultural land which was in the hands of white commercial farmers" needed to be redistributed.

However, only 4,123m ha (5%) had been transferred through government's "land reform" programme and a further 1, 443 million ha (1.76%) through land restitution. In answer to a later parliamentary question Minister Nkwinti said that as of March 2013 R6.5bn had been paid out to individuals how had opted for financial compensation instead of land restitution. This was the equivalent of 1.992m ha (2.43%).

In total then, according to Minister Nkwinti's figures, a total of 7.6m ha (out of the 24.5m) had been transferred to black people through redistribution or restitution (or financial compensation received in lieu thereof) by early 2013 - only 9.2% of 82m ha or a third of the goal.

Among the factors that have been blamed for this is a lack of funding. However, the amount that has been spent on this programme is, in fact, not inconsiderable. Since 1995 up until the 2013/2014 financial year R29bn has been spent on land restitution and another R23,4bn on racial land redistribution in nominal terms. Add in the R3,5bn that has been spent on rural development and the total rises to R55,9bn.

In real terms government has spent R38,5bn on land restitution, R30,6bn on land redistribution and a further R3,7bn on rural development in 2013 Rand values. To put this amount in context the Department of Agriculture, Forestry and Fisheries estimates that the value of land and fixed improvements in commercial agriculture, as of June 30 2013, amounted to R167,3bn, while total farming debt stood at R93,5bn (see here - PDF).

In other words the amount government has spent on land restitution and redistribution (R69,1bn) amounts to 41,3% of what the DAFF estimates to be the total value of land plus improvements in commercial agriculture. Add in the amount spent on administration and rural development and this rises to 50%.

The question this raises is whether land redistribution has, in fact, been slow or whether it is simply being measured against an impossible yardstick.

Where is South Africa's land located and what is its quality

Before going on to analyse the ANC government's land targets it is necessary to make a few observations about South Africa's land, its capability and where it is located. The country's total land area amounts to 121 973 200 ha. According to the eight-class land capability grading system, used by the DAFF, very little of this is high potential arable land. Land capability has been described as an assessment of the "suitability of land for productive use or uses after taking into account the physical limitations of the land" (and before taking into account social and economic factors). Relevant limitations in the South African context would include factors such as low or irregular rainfall, steepness of slope, depth of soil, vulnerability to erosion, and so on.

According to DAFF figures just 2% of the area of South Africa falls into classes I and II, areas suitable for intensive cultivation, while another 10.6% falls into class III, land appropriate for medium cultivation. According to the department this means that 12.6% of the surface of area of the country can be classed as arable land.

As is evident from the map below South Africa's low capability land (classes VI, VII and VIII) is concentrated in the arid west of the country: in the Northern Cape, Western Cape and western Eastern Cape. The extent of each province, and the capability of the land in each, is captured in Graph 1 below. 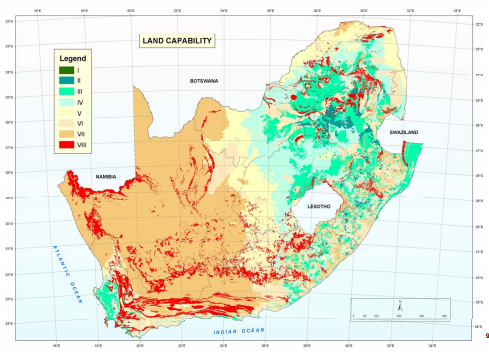 Thus while the Northern Cape covers 30.6% of the area of South Africa none of this is counted as arable land (classes I, II or III) in terms of land capability grading system. Though the fourth largest province the Western Cape has the second lowest amount of arable land - in both hectare and percentage terms. By contrast Mpumalanga is the area with most and best arable land, in absolute terms, followed by KwaZulu-Natal and then the Free State and Limpopo. 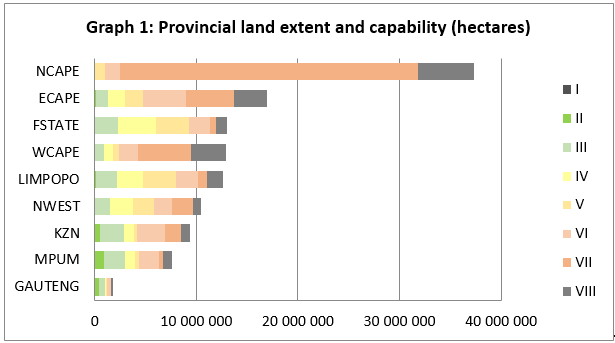 When people speak of redistributing the land they tend to think largely in terms of arable land. However, you could redistribute every single hectare of arable land in South Africa twice over and you would still miss the 30% target by miles.

The figure of 82m hectares of commercial farmland, against which the ANC's 30% target of restitution and redistribution is measured, comes from a 1996 Agricultural Survey. This survey estimated that, at the time, there were 60 938 commercial farming units covering 82 209 571 hectares, or 67.4% of the total area of South Africa.

Most of the "white" commercial farm land (some sixty percent) was located in the mostly arid west of the country in the Northern Cape, Western Cape and western Eastern Cape. 36.2% of the extent of all South Africa's commercial farmland was located in the Northern Cape alone. See Table 1. The reasons for this are not just that this is where much of South Africa's land is located, but also that the homelands were overwhelmingly concentrated in the higher rainfall areas in the east of the country.

As can be seen from the table less than 50% of the land in KwaZulu Natal, Gauteng and Limpopo in 1996 was commercial farm land, and less than 60% in Mpumalanga and the North West. By contrast, over three quarters of the Western Cape, Northern Cape and Free State was covered by commercial farmland at that time.

As noted in Part 1 of this series on the Land Question the 1916 Beaumont commission, set up in terms of the 1913 Natives Land Act, had not delineated meaningful areas of "Native" land in the west and north western parts of the Union of South Africa as these were not areas of historic or (at the time) current black African settlement. For this reason, and those mentioned above, it makes far more sense to evaluate government's record on land restitution and redistribution at provincial level.

The Restitution of Land Rights of 1994 sought to reverse the totality of land dispossession under apartheid. It thus aimed to provide redress not just to those whose title to land had been taken from them through racially discriminatory legislation, but also to tenants and sharecroppers who had been forced off land they had been racially barred from purchasing.

The Act thus provided for "the restitution of a right in land to a person or community dispossessed under or for the purpose of furthering the objects of any racially based discriminatory law." It defined a "right in land" to mean "any right in land whether registered or unregistered, and may include the interest of a labour tenant and sharecropper, a customary law interest, the interest of a beneficiary under a trust arrangement and beneficial occupation for a continuous period of not less than 10 years prior to the dispossession in question."

According to statistics provided by the Land Claims Commission as of March 31 2013 77 334 land restitution claims had been settled from which 368 090 households and 1 803 984 individuals had benefited. Just over 3m ha had been transferred to beneficiaries as part of the restitution programme and claimants had received R7,6 bn in financial compensation in lieu of the restitution of just under a further 2m ha. In total then 5m ha have been transferred - or compensation received in lieu thereof - under South Africa's land restitution programme (this may include some state land).

In a sense the 1994 land redistribution programme of the ANC was doomed to failure by the 30% of 82m hectares target. This was an objective set with little understanding of South Africa's geography, history, land capability or human settlement patterns.

The restitution process was focused, for obvious reasons, not on areas where much of the land was located (in the west of the country) but in the areas where most apartheid-era dispossession had occurred. In Limpopo, Mpumalanga and KwaZulu-Natal the area restituted, so far, is equivalent to approximately 20% of extent of commercial farmland in 1996.

The ANC government has, however, shown little interest in buying up large tracts of semi-desert for land redistribution and this alone nullifies the 30% target. It is also important to note that after 2009 government took its foot off the peddle when it came to land acquisition - as 90% of the land purchased thus far for emerging farmers was no longer productive - and it shifted resources instead to recapitalising failed projects. In its latest annual report the Department of Rural Development and Land Reform states that 157 556 ha was purchased in the 2012/2013 financial year. This is about half its original target. The department explains this by saying that it "changed from a hectare-driven approach to acquisition of going-concerns (existing agricultural business concerns). Furthermore, 25% of the land acquisition budget was shifted to fund the Recapitalisation and Development Programme."

There are two further reasons why the 30% of 82m hectares goal is a dubious measure. Firstly, it has always taken only state purchased or paid for land into consideration and not that bought on the open market by black South Africans since 1991. And, secondly, it assumes that the amount of commercial farmland in 2014 is the same as in 1996. In reality though the number of commercial farms has halved in South Africa over the past seventeen years (from 60 000 to about 30 000) as the ANC government cut off agricultural subsidies. There has been a huge expansion of urban areas, much sub-economic farmland has been shifted over to nature conservation or leisure use, and large tracts of Mpumalanga, in particular, have been blighted by mining. It is reasonable to assume then that the amount of commercial farmland has been significantly reduced in this period.

If the ANC government had chosen as its objective a sensible target rather than an absurd one for land redistribution it would be able today to proclaim its great success. As of March 2013 9 001 756 hectares of land had been restituted or redistributed by the ANC government. By any objective measure this is a huge area. It amounts to an area 69% of the area of England and 56% of the total area of the homelands at the end of apartheid.

A mental health workout – with insights from The Wall Street Journal