The real problem with Capitec

Shawn Hagedorn says bank's business model may be profitable, but it is unsustainable for SA

Just as I had submitted an article arguing that SA’s economic policies should focus on reducing the country’s massive poverty through pursuing a commercially astute regulatory environment, Viceroy released their seemingly sloppy report about Capitec. The underlying theme of my last piece was that SA’s politics and economics collide due to confusion around how social justice is achieved in the 21st century global economy. The Capitec conundrum is disturbingly instructive.

Capitec’s management are justified in being proud of many of their accomplishments. Unlike their counterparts at the old African Bank, Capitec’s management adds value beyond finding ways to milk low-income borrowers. Nonetheless, their business is largely predicated on having huge numbers of lower-income borrowers being overly burdened by expensive debt. Such lending is high on the list of why SA’s extremely high prevalence of poverty is so entrenched.

The bogus counter argument is that if authorised lenders don’t provide funding, then loan sharks will step into the breach. Yet, the worst of the loan sharks have not gone away whereas authorised financial institutions have made expensive borrowing a cultural norm. If formal lending options weren’t so ubiquitous, most would turn to friends and family members. Expensive lending is a problem made far worse when the money leaves cash starved communities. This makes a “follow the money analysis” disturbing to contemplate.

SA’s economic policies are centred around redistribution. Perhaps this is understandably politically but it has been over relied upon to the point of being counterproductive. The annual budget for social grants is headed toward R200 bn. Other forms of redistribution have direct, indirect, and opportunity costs which are likely to be higher still. Nor are the full range of transaction cost inconsequential.

Those who are, against long odds, escaping poverty to enter lower middle class then funnel what should be their savings back to lenders based in Johannesburg or Stellenbosch. This is makes for a surreal mixof reckless policy making.

I had written about such dangers before and during African Bank’s collapse. The remedy I strongly preferred at the time was to let that bank collapse to the benefit of its competitors. The other microlenders should have then been put on notice that the usury rate would be ratcheted lower and lower over a few years and they would need to adjust their business models accordingly. My expectation was, and still is, that Capitec would have competed very successfully in such an environment - though the volume of profits would have suffered. The regulatory environment could have also been improved leading to lower lending costs.

I could have explained why this was necessary when I was a teenager prior to many finance, economics, and accounting courses. I knew then that the loan my parents took out to buy the family house was priced at about two percent over inflation - in a country far from SA.

When my father suddenly died, my mother didn’t take the life insurance money and pay off the bond on the house. Rather she invested in shares. Over a decade later I entered university with a working understanding of why she had made a wise decision. Conversely, if the house had been financed at 10% over inflation, let alone 20%, my mother’s investment portfolio would have been exhausted trying to keep up with the bond payments.

A house is less of a productive asset than, say, a computer used in a business, but they have long lives. SA’s poor routinely purchase assets with relatively short lives at effective interest rates 20% above inflation. The macro effects are devastating both politically and economically. Of course, no one would finance the purchase of a home at the rate of inflation plus 20% as they could immediately see that they could rent a comparable home for a modest fraction of the monthly bond payment. With consumer products such proxies are elusive.

It is understood that most low-income borrowers are not numerically astute. But how do the policy makers not understand that microlenders’ successes undermine SA’s ability to alleviate poverty - thus risking radical populism?

SA’s consumers are mostly poor, over indebted, or both. This could change through surging value-added exports - which is the primary driver of today’s broad global prosperity - but this avenue is precluded by how BEE and labour policies undermine SA’s competitiveness. Thus policy makers undermine exporting while accommodating lending practices which stunt disposable income. Then they wonder why SA’s per capita income will soon complete a decade of no growth.

If Capitec’s business model really adds value, it should be globally relevant. A domestic focus is also cause for concern as SA’s policy environment is likely to shift toward seriously embracing poverty alleviation.

SA’s mix of sophisticated financial services capacities and redistribution focused policies formed a poverty entrenching conspiracy as global poverty plummeted spectacularly over the past quarter century. There is little reason to think that this greatly troubled President Zuma as he made his cabinet choices. But Cyril Ramaphosa no doubt fully appreciates that he must begin a rapid poverty reduction trajectory or his presidency will end badly.

When African Bank collapsed, commentators and analysts judged lending “reckless” if it wasn’t profitable. Viceroy speaks of both “reckless lending” and “predatory lending”. Rather than invoking values, Capitec’s business model should be judged on its sustainability. While it is products and business case is clearly superior to those of the old African Bank, being a market leader in this sector is inherently problematic.

Capitec may have the best management team in the sector, but high priced lending to low-income households must contract.

A table of Capitec's rates and fees for credit - from their website: 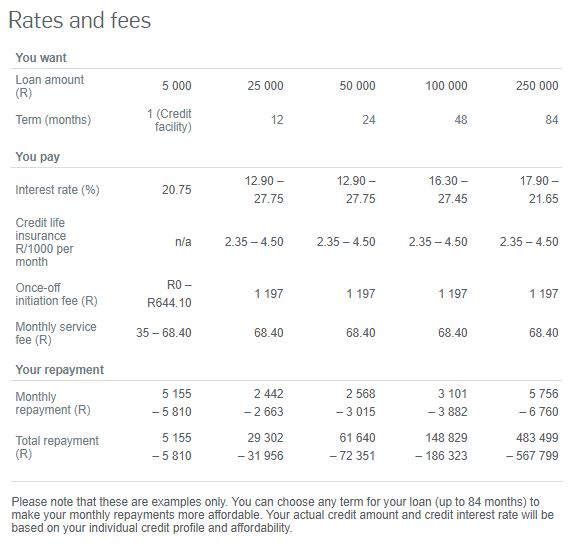 Ramaphosa has to go for growth

What university students need to know