How well is SA's largest and most influential newspaper really doing? (Sept 2009)

JOHANNESBURG - "Nothing in this world can be said to be certain," Benjamin Franklin famously observed, "except death and taxes."

To this select list one could perhaps add the circulation figures of South Africa's largest Sunday paper. The news cycle will turn, presidents may fall, but of one thing you can be sure: No matter what happens, the circulation of the Sunday Times will remain fixed at around 504 200.

This, at least, is the picture that emerges from a compilation of the audited ‘paid circulation' figures submitted by the Sunday Times to the Audit Bureau of Circulation (ABC), going back to 2006.

Clearly then the Sunday Times has been extraordinarily successful at maintaining its total circulation at a predetermined level. The reason it is being kept there is because the 504 200 figure is apparently the point of maximum profitability for the newspaper.

It is here that printing costs per paper are at their lowest and advertising returns at their highest.

For advertising agencies, the value of advertising in a particular newspaper is determined by the measure of ‘cost per thousand' sales. Thus, the Sunday Times charges 54 percent more for full colour adverts than the second largest Sunday paper, Rapport. But this is more than made up, from the advertiser's point of view, by the fact that its total circulation is 64 percent higher.

More counter-intuitively, it is not in the newspaper's interests to increase circulation above this level either. Anton Harber, Caxton Professor of Journalism and Media Studies at Wits University, notes that a circulation of just over 500 000 is the "magic number" for the newspaper.

"The only advantage in going higher is to increase advertising rates," he states. "But they can't push theirs any higher - it becomes more cost effective [for the advertiser] to use television and the [newspaper] meets advertisers' resistance. To go higher would therefore cost them in printing and distribution without bringing more revenue. Their profits would dip."

The question, then, is how is the Sunday Times really doing?

Before discussing this, it is necessary to understand the different categories, as determined by the ABC, which make up the total circulation figure. There are essentially two kinds of sales.

There are the copies purchased by the readers themselves, through subscriptions or in shops and on the streets; and copies bought, in bulk, by third parties and given away to members of the public, customers and educational institutions.

In the first class, according to the categories the ABC employs, are ‘copy sales', ‘home subscriptions' and ‘business subscriptions'. In the second: ‘travel and commercial subscriptions' (the newspapers you would receive at hotels or airports), ‘third party bulk sales', and ‘Print Media in Education' (PMIE) sales. In terms of ABC rules ‘third party bulk sales' cannot make up more than 10% of total circulation. There is no such restriction when it comes to PMIE sales.

In all of these categories, according to the ABC, the newspapers must be sold at 50% of cover price in order to be counted towards the circulation figures. (Barter deals are allowed whereby, for instance, a newspaper may provide an airline with newspapers in return for free flights for its staff, to an equivalent value.)

While all of these count towards the total circulation figure, some are obviously more equal than others. Gordon Patterson, representing the Advertising Media Forum (AMF) on the ABC board, says that copy sales are "the pulse" of the publication - the most immediate reflection of its performance in the market place. Overall, he regards the key measure for advertisers as ‘core circulation' - a combination of ‘copy sales' and subscriptions.

Bulk sales, distributed as giveaways, are obviously not a reliable indication of a newspaper's current popularity. And, unlike with ‘copy sales', if a bulk purchaser fails to distribute the newspapers to the public they still count towards total paid circulation.

Price, Patterson notes, is also a discriminating factor. Should a newspaper - that is traditionally sold - be distributed for free, then the readership profile would unavoidably become less distinct.

Thus, if on the one end are sales to readers, on the other are the copies given away to schools through the PMIE scheme in the week following publication. School children, quite obviously, aren't in the job market, don't earn significant incomes, can't (or shouldn't) buy alcohol, purchase cars, or vote. There is little immediate benefit then for employers, banks, car manufacturers, appliance stores, furniture shops, breweries, or political parties in reaching this kind of reader.

If one looks at the breakdown of the ABC figures for the Sunday Times, there are major fluctuations, over time, in each of these categories. Decreases (or increases) in individual sales, are always matched by an equivalent increase (or decrease) in giveaways. Whatever the fluctuations in each category, add them all together and the magic number of just over 504 000 is hit quarter-after-quarter (see first graph below).

What the consistency of total circulation is hiding is a fairly substantial decline in core circulation over the past couple of years.

The newspaper's massive subscriber base has remained stable since early 2008. But, if one just takes the ‘pulse' of the publication, then single copy sales within South Africa are down from 300,595 in the fourth quarter of 2007, to 245,186 in the second quarter of 2009.

This means, in effect, that the Sunday Times is becoming increasingly dependent on ‘third party bulk' sales and PMIE to top up its circulation and keep it at the 504 200 level.

Advertisers may not mind that decreasing numbers of individuals are actually buying the Sunday Times, as long as it maintains its overall readership. A large proportion of the newspaper's ‘third party bulk' sales end up being handed out at tollgates - thereby ensuring that the paper still is properly distributed and reaches a relatively high LSM.

Nonetheless, the determination of the Sunday Times' to always hit the "magic number" may prove to be a poisoned chalice for the newspaper. In particular, one wonders whether the proven ability of the circulation department to keep total circulation stable has not allowed a certain complacency to creep in on the editorial side of things.

Why bother too much about the quality of content when the wizards at circulation can always be relied upon to make up for any shortfall in individual sales? 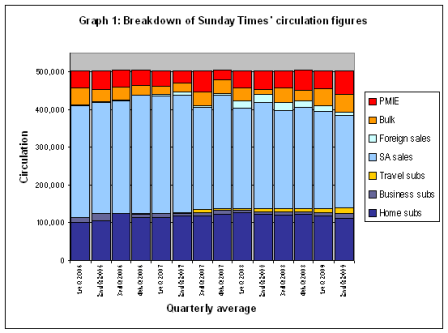 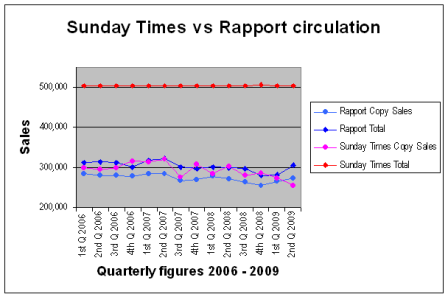 Note: The Sunday Times' publisher turned down an opportunity to provide comment for this article

So what if our newspapers fail?