DA the most multi-racial of the parties, ANC support base 96% black African, EFF's 99%

Ipsos survey:  Profiles of the supporters of the three biggest political parties in South Africa

The question is often asked who the supporters of a specific political party are or, put slightly differently, how representative a particular political party is of the voters in the country.

An analysis of ELIGIBLE VOTERS in South Africa yields interesting results.  The question: "If there were national elections tomorrow, which political party or organisation would you vote for?" is used as the basis of this analysis. Overleaf the profiles of the supporters of the ANC, DA and EFF are compared with the profile of South Africans eligible to vote.1 These three parties were chosen based on the support for them expressed in a November 2013 Ipsos poll.

Ipsos South Africa undertakes a Pulse of the PeopleTM study every six months.  A randomly selected sample of South Africans of voting age are asked which party they would support on the national and provincial level if there were an election the next day.  Respondents then fill in their own choices on a "ballot paper" - making this a secret vote.

These profiles of the different political parties are meant to give insight into the composition of the group of supporters of each of the parties separately. ‘ 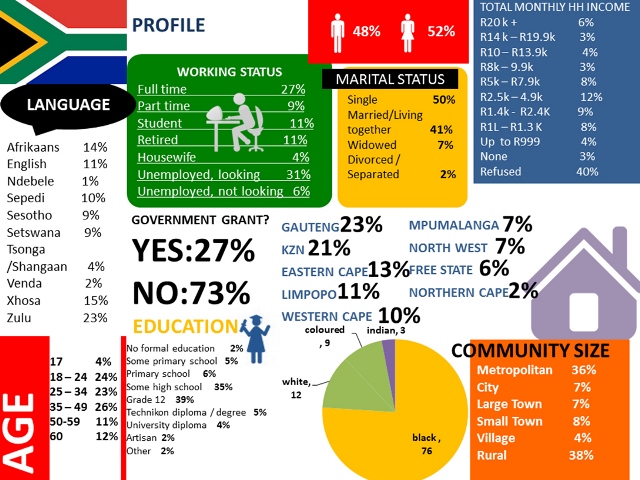 Some of the major differences and points of interest are summarised below. 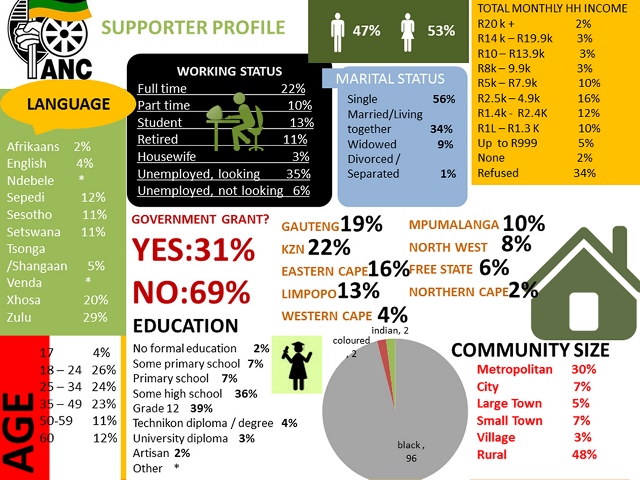 ANC supporters mirror the age profile of South Africans of voting age, whereas the DA supporters tend to be slightly older; however, the EFF have very few supporters over the age of 50.

South African voters are fairly evenly split as far as gender is concerned, with female voters a slight majority.  This national profile is close to that of ANC voters.  DA voters are also evenly split between males and females.  However, two thirds of the supporters of the EFF are male.

In keeping with the general profile of South African voters, almost three in every ten ANC voters have Zulu as home language.  In contrast, the DA draws the majority of its support from Afrikaans and English speaking households, but it is very interesting that 18% of DA supporters speak one of the black languages as home language, negating the criticism often raised against the DA that it is a "white party". More than a quarter (27%) of EFF support comes from Sepedi speakers, but the party also does well under Zulu and Xhosa speakers. 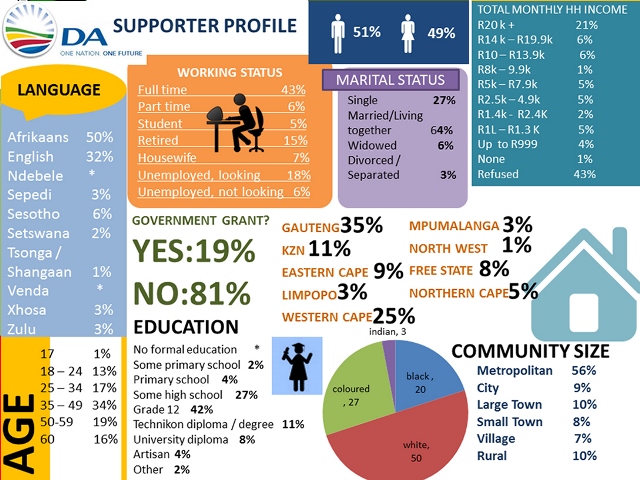 About half of DA supporters are working (either full-time or part-time), whereas those who are unemployed and looking for work are more prevalent amongst the ANC and EFF supporters.

In keeping with the age profile, almost two-thirds of DA supporters are married or are living together, whereas three quarters of EFF supporters are single.

Coming back to what was said earlier about home language, a fifth (20%) of DA supporters are black, whereas the vast majority of ANC (96%) and EFF (99%) supporters are black.  In fact, the DA is the only party out of the three drawing support from all main population groups in South Africa.

In line with the  higher proportions of working supporters as well as a higher education profile, DA supporters tend to be more affluent than those of the other two parties.  However, substantial proportions of supporters of all three parties refused to share information about their household income. 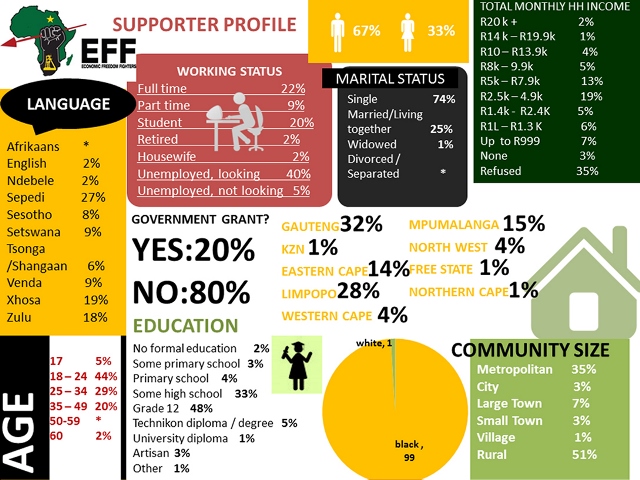 A total of 3564 personal face-to-face interviews were conducted with randomly selected adult South Africans. The interviews were done in the homes and home languages of respondents.  Trained quantitative fieldworkers from all population groups were responsible for the interviewing, which took place from 22 October to 21 November 2013.  Interviews were done all over the country, from metropolitan areas to deep rural areas. This methodology ensured that the results are representative of the views of the universe and that findings can be weighted and projected to the universe - i.e. South Africans 18 years and older.

Interviews were done using CAPI (Computer Assisted Personal Interviewing) and all results were collated and analysed in an aggregate format to protect the identity and confidentiality of respondents.

All sample surveys are subject to a margin of error, determined by sample size, sampling methodology and response rate. The sample error for the sample as a whole at a 95% confidence level is a maximum of 1,67%.  When analysing the results for smaller provinces (i.t.o. population size) separately, the margin of error will be higher for those provinces.

About Ipsos: The Home of Researchers

Ipsos is an innovative, entrepreneurial, client-focused organisation, providing research services to clients on a global basis. We set ourselves high standards and aim to work collaboratively in partnership with our teams in order to service our clients most effectively.

Ipsos is proud to be the only global market research company that is still controlled and operated by researchers. We aim to remain the natural home for intellectually curious and passionate researchers.

1 Polls are valid for the time when the fieldwork is done and should always be evaluated against this background, within the margin of error.

ANC polling at 45% in Gauteng - Ipsos

ANC's support down to 53% among eligible voters - Ipsos