The townships are dangerous & other myths

Michael O'Donovan on the relationship between inequality, class and crime

The belief that crime is caused by poverty and inequality is a somewhat comforting one. It allows us to assume that as South Africa develops and, presumably, becomes more affluent and more equal, the crime rate will gradually decline. Cynically, it also affirms middle class prejudices that the anti-social thuggish elements of society come from those living across the railway and not from their midst.

Somehow we now all seem to know that our high crime rate is caused by poverty and inequality. This perception is supported by the frequency with which researchers and politicians repeat the claim in a variety of forms.

In similar vein the British High Commission warns travellers of South Africa's high crime rate and advises them to avoid township areas at night. The obvious implication is that black townships are more dangerous than the more affluent suburbs.

These and other statements affirm that poor are disproportionally the victims of crime and, by implication, poor and black areas have higher crime rates than more affluent and whiter areas. However it is necessary to look beyond our preconceptions and ask what evidence is there is of the relationship between crime and poverty and inequality. Are our beliefs affirmed by empirical evidence?

Other things, including the prevalence and severity of violence, being equal the area with the poorer medical services will invariably have the higher murder rate. What then do we know about the relationship between the likelihood of being victimised, wealth, inequality and race?

To deduce the empirical relationship between these issues we require detailed descriptions of social groups, geographical areas and their level of victimisation. Fortunately as we do have crime counts for the thousand plus police stations in the country we are able to differentiate between communities and discrete areas to some extent.

The insights from the correlations are pretty unambiguous. Those expecting to find that precincts with low average incomes have higher crime rates will be sorely disappointed. As a rule poorer areas clearly have lower rates of both property and violent crime. Relatively affluent people are significantly more likely to be a victim of theft or violence than their poorer counterparts.

The trend is particularly clear with regard to property offences where the rate of theft clearly increases with average income.

As these have different trajectories it is helpful to draw a distinction between victimisation rates for property and violent crime. On the one hand the rate of property crime increases with income. This rule should be expected as the number of opportunities presenting themselves to thieves and the rewards for theft increase with the affluence of the victims. Essentially there is more and better stuff to steal in wealthier areas.

At this level the evidence, one way or the other, is pretty shaky as many factors other than income influence violent crime rate. However one central point should be borne in mind. In the broader scheme of things 'townships' have, in general, incomes that are close to the national average. By this token townships, on average, do not represent the poor of the country but the middle income group.

Obviously township areas tend to have lower average incomes than suburban areas. But by the same token they, in comparison to rural areas, are affluent. By objective measures the dangerous townships referred to by the British travel advisory refer to middle income areas rather than poor areas.

Ultimately the data shows that inequality within areas is inconsequential but income between areas is highly significant.

For example various surveys indicate that the middle classes are most afraid of home robberies (a violent offence).

This type of offence is largely imagined along the lines of a home invasion where perpetrators gain access to the house with the express purposes of using violence to obtain property. However, a proportion of home robberies can be attributed to burglaries gone wrong. For example a burglary may turn into a robbery simply because the residents woke up or returned home unexpectedly. This is indicated by the positive correlation between burglary and robbery rates.

Apartheid ensured the separation of these communities through the use of open land and industrial zones as buffers. Thus while ensured that racially distinct communities were kept separate economic imperatives required that they could not be too far from each other.

Over the past two decades these communities have converged spatially as settlements filled the intervening buffers. This, unfortunately, has not necessarily resulted in the two communities becoming integrated socially.

By combining areas with its neighbours a measure of the level of inequality in the combined area can be derived. This measure is indeed correlated, although weakly, to higher crime rates. However the key question is why inequality between areas matters and inequality within areas does not.

One answer is provided by "social capital". Essentially "social capital" is a reference to those social connections that constrain anti-social or criminal behaviour. It is these connections, rather than the fear of the state, that prevents people from behaving in socially destructive ways.

What seems evident is that social capital serves to regulate the behaviour on people within a particular social milieu but when these individuals cross into an area into which they have not been socially integrated these constraints fall away.

This indicates that a thug is more likely to behave himself at home than when he is in an area where he is unknown, unidentifiable and not subject to social pressure. Obviously the social capital that constrains his behaviour is likely to be particularly weak in an adjacent suburb that has a different ethnic, social and class composition.

While the juxtaposition of poor and affluent areas is typical of urban areas throughout the world few areas outside of South Africa and Brazil have quite this level of social homogeneity within areas and social contrast between neighbouring areas.

The implications of these findings are quite profound. It suggests that even if development in South Africa were to result in decreased inequality and rising affluence this would not necessarily result in a safer South Africa.

If, for example, development results in a wealthier precinct and in a widening income gap between it and its neighbours this may result in higher crime rates.

Similarly, as proposed by most metropolitan councils, placing low cost housing in more affluent suburbs may result in increased crime levels unless the two communities become socially integrated. However such social integration is extremely improbable.

The arguments that crime is caused by poverty and or inequality is thus not borne out by the empirical evidence. However statisticians constantly warn against committing "ecological fallacy" - inferring things about individuals using data from groups (middle class suburbs with a high proportion of white residents). I think this debate may thus continue for some time. 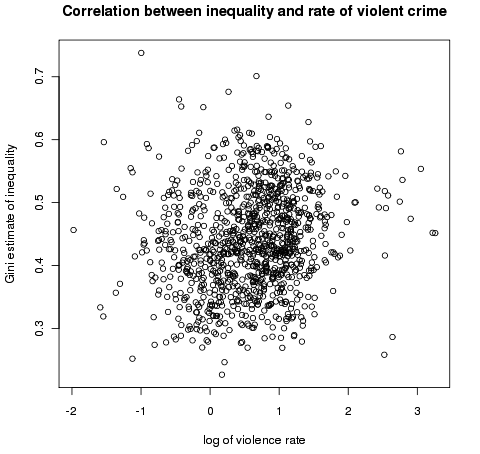 The above graph shows, for each police station area, how crime rates crime and income inequality (measured using the Gini coefficient) relate to each other. No general trend is discernible i.e. a high level of inequality is as likely to be seen in a station with a low level of crime as it is in one with a high level of crime. Inequality and crime levels within station precincts appear to be unrelated. 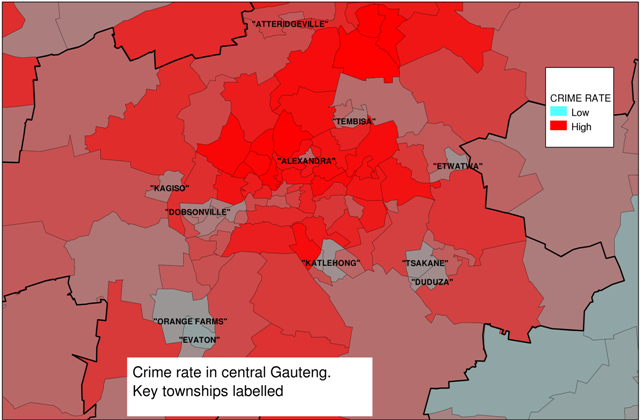 This article was published with the assistance of the Friedrich Naumann Stiftung.

On race and crime: A reply to a reply

On race and crime: A reply

On race and crime in SA