There is no Supreme Constitution - Koos Malan

Koos Malan, There is no Supreme Constitution: A Critique of Statist-individualist Constitutionalism, African Sun Media, 2019

None of the articles of faith of the South African Constitution is plausible. The Constitution is not supreme and entrenched. Vulnerable to potent socio-political forces it changes continuously and often profoundly regardless of stringent amendment requirements. The trite threefold separation of powers is more metaphorical than real and therefore unable to secure effective checks and balances. Though institutionally separated with their own personnel and functions, the three powers are ordinarily integrated 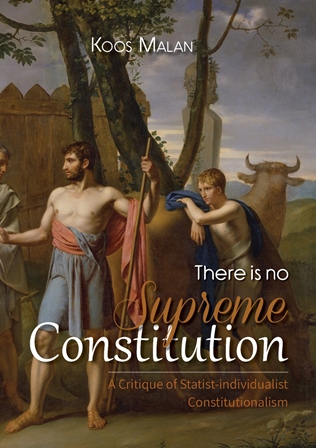 in a single dominant political leadership, committed to achieving the same ideological goals. The bill of individual rights cannot guarantee justice, because rights are subject to the ideologically-driven exercise of judicial interpretation, often with damaging consequences for those relying on the bill of rights.

This situation does not only apply to South Africa, but to all Constitutions premised on the same articles of faith, in this book described as the doctrine of statist-individualist constitutionalism. An improved mode of constitutionalism is called for - one which is equipped with a sounder system of checks and balances and better endowed towards the achievement of justice through a balanced constitution.

There is no Supreme Constitution is one of those very few real additions to the field of constitutional theory and constitutional law. Every student and scholar in the field, in South Africa or anywhere else in the world, stands to profit immensely from it. If its message comes through, a lot of foolishness would be avoided. - Prof Andreas Kinneging, Leiden University, The Netherlands

How the ConCourt dropped the ball on systemic corruption

The Afrikaners: A letter to the Australian PM

"South Africans have spoken: Helen Zille is a beacon of true political character and leadership" - BizNews

Round up the unusual suspects

Ramaphosa’s failures are his successes

"South Africans have spoken: Helen Zille is a beacon of true political character and leadership" - BizNews