On Virgin Active/Freedom of Expression

On Wednesday morning Desai, a member of Virgin Active for several years, received calls from the Branch Manager of his Virgin Active Old Eds Gym as well as the Regional Manager of the company. Virgin Active communicated that they had received complaints from several pro-Israeli supporters who frequent the gym regarding t-shirts that Desai wears.

The managers said that, after consultation with their legal office and upper structures of the company, Desai will not be allowed to enter the gym for as long as he wears a BDS tshirt with pro-Palestinian messaging, or one that calls for a “Boycott of Israel”. Desai requested copies of the complaints which were never furnished to him. 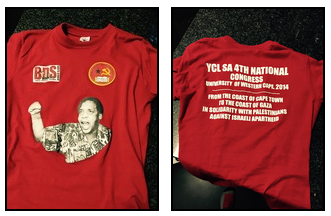 Desai also requested relevant Virgin Active policies as well as a letter outlining the reasons he had been barred from accessing Virgin Active wearing a BDS tshirt. He failed to receive a response and then proceeded to visit the gym later that Wednesday evening.

On entering the gym later that evening (wearing a BDS/YCL Chris Hani tshirt, see attached) the manager informed Desai that he had been instructed to remove Desai if he had entered wearing a BDS tshirt. Desai offered to leave but only if relevant policies could be provided as well as a copy of a letter outlining why he would not be allowed in.

The gym then called the police but the police refused to arrest Desai saying that: “We can’t arrest him for a tshirt”. Virgin Active then claimed that they wanted Desai removed for his own safety in case a pro-Israeli supporter at the gym were to assault him. The police responded saying that if that happened they will arrest the person who carries out the assault.

One Israeli supporter who was at the gym last night insisted that he had been assured, before last night's incident, by Virgin Active that no one with a BDS tshirt will be allowed into the gym anymore.

BDS South Africa is in possession of some video as well as audio recordings from last night.

If Virgin Active is not forthcoming with publicly affirming Desai’s, or any other persons right, to wear his BDS tshirt then Desai, with the support of the organization, will continue with the process of laying a complaint with the South African Human Rights Commission as well as taking the matter to the Equality Court to seek relevant recourse.

On a positive note we wish to extend our appreciation to members of the community who have come out in support on social media and elsewhere. This issue is beyond Desai and BDS South Africa. On the one hand this issue is about putting an end to the Israeli lobby its supporters suppressing any criticism of Israel through intimidation and bullying of students, companies and members of the media. On the other hand this issue, at its heart, is about the Freedom of Expression and defending that hard won right.

We commend and encourage the call to wear t-shirts of progressive causes that we identify with.

Angry SAs speak: Eskom has taken us back to the dark ages!