"Whites deserve to be hacked and killed like Jews"

In Facebook posts Velaphi Khumalo says he wants to cleanse country of all white people, as Hitler did to the Jews of Europe

Cape Town – A man who called for black South Africans to do to white people what "Hitler did to the Jews" has gone to ground.

Velaphi Khumalo, who raised the ire of many when he called for the country to be cleansed of white people this week, deleted his Facebook page on Wednesday (see images below).

This after 21-year-old Daniel Amos, from Cape Town, opened a case of crimen injuria against him on Tuesday.

Khumalo, who on Facebook listed the Gauteng Arts and Culture Department as his employer, said he hated all white people.

Repeated attempts to get hold of Khumalo, including through the record company he listed as his business, proved unsuccessful.

"I want to cleans this country of all white people. we must act as Hitler did to the Jews. I don’t believe any more that the is a large number of not so racist whit people . I’m starting to be sceptical even of those within our Movement the ANC. I will from today unfriend all white people I have as friends from today u must be put under the same blanket as any other racist white because secretly u all are a bunch of racist fuck heads. as we have already seen [all sic],” he wrote.

He later said he was unapologetic about his post.

"We are taking serious actions against employees of the provincial government who are posting hateful speech on social media #WeSayNoToRacism," they tweeted, without directly confirming that Khumalo was in their employ.

"The Gauteng Provincial Government views the hateful comments made by Velaphi in a serious light. We will not fight racism with racism." 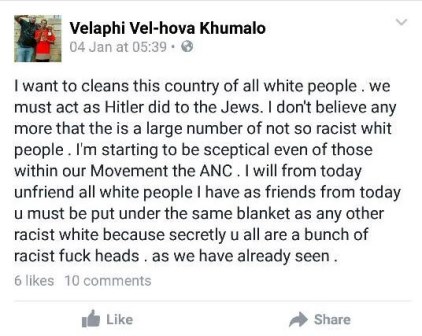 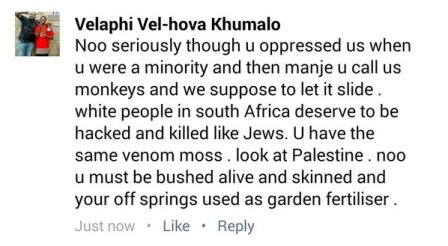