Will the BRICS make or break South Africa?

A dramatic shift in global power

The world is undergoing structural transformations. In a way not seen in generations, these are dramatically altering global power in general, the power relations between developed and developing countries, and power relations within countries themselves. The post-Cold War consensus forged after the fall of the Berlin wall in 1989, where Western countries provided the global leadership in politics, economics, ideas and innovation, is now being eroded. 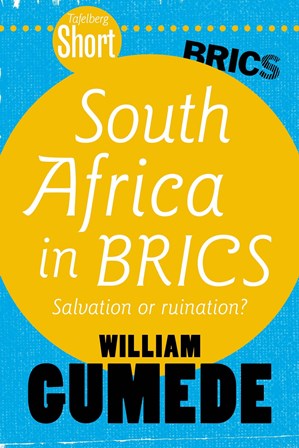 The slowdown in the US economy and the debt crisis in Europe caused by the global financial crisis started in 2008. The simultaneous economic rise of emerging countries such as China, Brazil and India has the potential to remake the world and to refashion existing unequal global power relations between developed countries and developing countries - traditionally skewed in favour of developed countries.

According to a recent World Bank report[1] emerging markets will account for more than half of all global growth by 2025. The US dollar may no longer be the dominant global currency and the global monetary system will be more multi-currency in nature. Projections show that by 2060 emerging markets such as China, India, Russia, Mexico, Brazil and Indonesia will produce around 70% of global trade.[2] It now stands at 30% of world exports.

The crisis in many leading Western powers is not confined to their economies alone; there are widespread crises of leadership and a poverty of ideas. Many of the democratic institutions are either vulnerable, under siege or losing domestic credibility. In the past these Western institutions were seen as benchmarks for developing countries to emulate.

The moral authority of leading Western countries and leaders is rapidly eroding. In many model Western democracies, human rights and individual liberties are under threat. In June 2013, it was revealed that the United States, under the presidencies of George W Bush and Barack Obama, spied on the Internet data of its own citizens until 2011, watching who Americans exchanged e-mails with and the Internet Protocol (IP) addresses of their computers.[3] In May 2013 it was revealed that the US Justice Department secretly obtained two months of telephone records of reporters and editors for The Associated Press, in what the agency's CEO Gary Pruitt called a ‘massive and unprecedented intrusion' into how news organisations gather news.[4]

The UK has introduced a plethora of anti-terrorism legislation that civil groups say undermine civil liberties. These include 2007 anti-terrorism legislation that includes extending a 28-day limit on detention without charge to 90 days; the Criminal Justice Act 2003, which took away the right to trial by jury and the right to silence under certain circumstances; the Regulation of Investigatory Powers Act 2000, which removed the freedom to communicate privately without surveillance; and the Terrorism Act 2000, which removed the freedom to protest under certain conditions.[5]

But global institutions of governance - such as the World Bank, International Monetary Fund (IMF), United Nations and the International Court of Justice - also face crises of credibility. These global institutions are seen as biased towards Western countries at the expense of developing countries, and their policy precepts are perceived to a large extent to have failed. The World Bank and IMF have not only failed in their interventions in developing countries, they have mostly mishandled recent global crises, including failing to resolve the global financial and Eurozone crises.

The UN has failed in Western-led interventions in Iraq, Afghanistan and Libya, where the organisation was used by Western powers for their own self-interest. It has also failed to act to stop conflict in Syria, Somalia and Rwanda. The International Criminal Court, the world's first permanent criminal court, has consistently been accused of prosecuting only Africans and those from developing countries while Americans, for example, are exempted from prosecution by the court.

The global financial and Eurozone crises have also turned economic convention upside down, and the dominant Anglo-Saxon version of capitalism consensus that has held sway in the West in the post-Cold War era is now being critically examined. Western countries are bailing out commercial banks with state money, supporting strategic industries that are failing with public money, and building higher trade walls to protect their industries.

Rivalry, by means of trade, between industrial countries and the new emerging powers is increasing. The United States and China frequently accuse each other of spying. In June 2013 the US Justice Department accused China's largest wind turbine company, the Sinovel Wind Group, of stealing US proprietary wind turbine software technology from AMSC, the US technology company ( previously known as American Superconductor).[6] In the same month, former US National Security Agency contractor Edward Snowden accused the US spy agency of snooping on Chinese targets, including hacking Tsinghua University in Beijing, which houses one of six ‘network backbones' that route China's Internet traffic.[7]

Africa is increasingly becoming a trade battleground between industrial countries and the new emerging powers. Old industrial powers are also re-entering Africa to secure resources to reboot their own flailing economies. At the same time, new emerging powers are dramatically entering Africa, seeking its resources to keep on growing. Africa can either cleverly leverage the new interests in its resources, or it could face recolonisation if it does not secure better trade terms with these new investors.

Although emerging powers are fast growing in influence, they do not yet have the collective institutions, ideas or economic power to replace the old industrial powers. Most of the emerging powers have deep inequalities between the rich and the poor, huge pockets of poverty and non-accountable, weak or non-existent democratic institutions. This makes them ‘systemically vulnerable'.[8] The public protests sweeping across some of the emerging markets shows how brittle its economic growth is. An example is Brazil, where more than a million people took part in protests across 100 cities over high transport fees, corruption and the costs of the 2014 FIFA Soccer World Cup.

Turkey, in spite of its high growth rates, increasing global influence and relative stability compared to Muslim neighbours, saw ordinary citizens rise up against Turkish Prime Minister Tayyip Erdogan for being too paternalistic and too authoritarian. Asli Aydintasbas put it this way: ‘We have a prime minister who has done great deeds and he really has run the economy well. But you also have this paternalistic style: "I know what's good for you. I, as your father, can decide on the park, the bridge, the city and the constitution." So, I think people are just wanting to have a more inclusive form of democracy in Turkey.'[9]

China's long-term stability is uncertain. At the moment China's approach is one of a managed democratic opening: gradually liberalising its politics but holding opposition, dissent and the Internet on a tight leash while keeping economic growth rates high. China needs Africa's raw materials to keep on growing at high levels if it is to keep the millions of impoverished Chinese on board. The moment economic growth slackens and the economic benefits to millions of poor Chinese slows, a North African-style revolt against the autocratic government will become a reality there too.

Many of the industrial economies are very dynamic and are already rebooting. The German economy, which generates close to a third of the Eurozone output, has largely managed to evade the recession its neighbours have fallen into. The United States still remains the largest national economy on the globe, with 2009 Gross Domestic Product (GDP) of US$15 trillion and average per capita income of US$41 000, compared to that of China with GDP of US$5 trillion and per capita income of less than US$4 000 per year.[10]

There is a power vacuum in the world: the emerging market economies are growing stronger, but not strong enough to replace the old industrial powers just yet.

A world in flux offers South Africa an extraordinary opportunity. If strategic, and if it has the right quality of leadership and ideas, a robust democracy, and it acts as South Africa Inc., the country could be the factory of a rapidly growing Africa, much as Japan was in Asia immediately after the Second World War. While part of BRICS, South Africa must balance its engagement between BRICS, other emerging markets such as Turkey, and the industrial powers in the West.

This is an extract from the Tafelberg Short "South Africa in BRICS: Salvation or ruination?" The full e-book can be downloaded from Leisurebooks, Amazon, Kalahari or Kobo

[10] William J Antholis and Martin S Indyk, How we're doing compared to the rest of the world, Brookings Institute, 13 February 2011.

Why William Gumede's wrong about internal democracy in ANC