Zille, the Guptas and the Weekend Argus’s shoddy journalism

This Sunday past (27 January 2013), the Weekend Argus published as its front page lead the following story: "DA ‘took money from Guptas'".

The story appeared as follows: 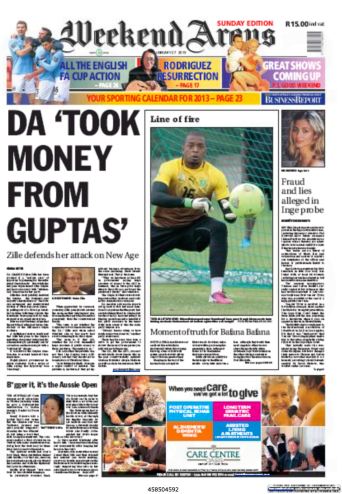 [Note the single, inverted commas around the phrase: ‘took money from Guptas', I shall return to that later.]

In it, the following linchpin statement is presented as ‘news' by the journalist Warda Meyer, and forms the basis of the story:

No innocents in the ANC

We really are stuffed

No innocents in the ANC

Why Zondo is wrong about direct election of President

It takes a Crook to catch a crook

Impressed SA’s speak: “Paul O’Sullivan is incredible and certainly knows how to investigate!”

"World Bank funding may come back to haunt us" - BizNews