Cape Town - ANC supporters have removed the Zuma Must Fall poster that was covering one side of a block of flats in the Cape Town CBD.

ANC Cape Metro spokesperson Khaya Yozi said it was mission accomplished for them.

“Mission accomplished. The poster has been torn apart,” he said.

“The message we want to send out there is that the racism that is down here in Cape Town is not acceptable.”

The large 'Zuma Must Fall' sign was erected in Cape Town on Friday morning. It hugged one side of a block of flats at the top of Long Street, on the corner of Kloof and Buitensingel streets.

The poster had tongues wagging on Friday with many trying to figure out who was responsible for it.

Spokesperson for the City of Cape Town, Priya Reddy, on Friday said the billboard did not comply with the Outdoor Advertising and Signage by-law and the person responsible would be prosecuted.

The DA said it was not responsible.

Despite the city saying the person responsible would be prosecuted, the ANC said it was not satisfied with how the matter was handled.

“We will be taking the City of Cape Town to task over this. The city has an obligation to act accordingly. 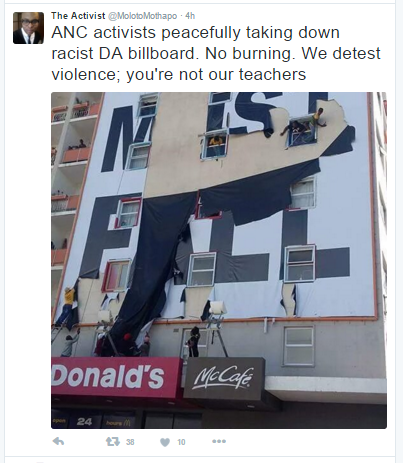 Zuma did not act unilaterally on the tax law - The Presidency