Jeremy Gordin reviews "When They Came for me: The hidden diary of an apartheid prisoner by John R Schlapobersky"

When They Came for me: The hidden diary of an apartheid prisoner by John R Schlapobersky. Jonathan Ball Publishers, 2021 (206 pages).

I think it fair to say that as a 16-year-old my two main interests were the fairer gender and reading and writing poetry. It was in connection with the latter that I came to know John Schlapobersky (JRS).

How, where and when this happened, JRS and I are still trying to work out [1] . As best as I can tell, we probably met early in 1969, once, maybe twice. Thereafter we’d exchange letters – he in Johannesburg, me in Brakpan – enclosing poems we’d written. I was in matric; he was doing his second year at Wits.

Don’t giggle; people did that in those days, especially budding poets, who (at least in my case) would spend hours poring over such letters and poems instead of paying attention to what they were supposed to be studying; also, the post office then worked.

But this correspondence came to an end when I read, presumably in the Rand Daily Mail, sometime in June or perhaps July 1969, that JRS had been arrested by the security police (SB).

I must say that I was terrified. By then my family had been visited once by the SB (in 1967 or 8) – this related apparently to my father’s earlier “political” activities [2] – and I’d seen the effect on my father and mother. I’d also just read for the first time George Orwell’s 1984 and the rat torture of Winston Smith haunted me for months.

Talking of which, JRS was arrested on Friday, June 13, 1969 – and what befell him, and how he’s dealt since then with his arrest, interrogations, and torture, are the subjects of this book.

One of his interrogators was the (rightly notorious) Theunis “Rooi Rus” Swanepoel, then a major, and another was (the equally notorious, though for different reasons) Johann Coetzee, also then a major, who’d become police commissioner from 1983 to 1987.

But here’s the thing. As Judge Albie Sachs points out in a preface to this book – JRS was “innocent” or, to put it another way, “an innocent”. He was a 21-year-old Witsie who had taken part in some anti-government demonstrations; had some black friends and acquaintances, including Mongane Wally Serote; and had, mainly through sheer happenstance, invited Winnie Mandela to his mother’s home for dinner[3]. But JRS was not a member of the ANC, SACP or any other similar organisation. ___STEADY_PAYWALL___

What being innocent meant, as Sachs notes, was that JRS was in no way psychologically or even physically prepared for what would happen to him. He’d not had the “briefings” about interrogation and torture that people such as Sachs had been given. Nor was there for him the “knowledge” that there were comrades out there supporting him (at least in their thoughts).

JRS was on his own – except for his parents and family, his then partner Janet Beattie, and, at more of a remove, two Rand Daily Mail journalists, Benjamin Pogrund and Margaret Smith, and, perhaps bizarrely, the then Israeli consul general in Johannesburg, Yitzhak Unna [iv]. 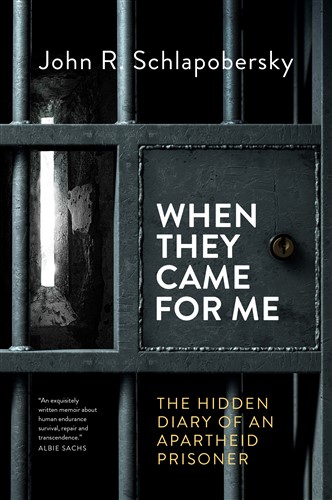 Additionally, as we know now, many of those who were “innocent” had – in a sense, if one can measure such things – a much worse time than other detainees because the police kept trying to crack people like JRS to divulge something, but if you had nothing to divulge, there was no end to one’s ordeal in sight, nor was it even possible to take the “exit” of confession.

And thus, we read in the core section of this book, JRS’ record of his 55 days in the hands of the SB, from Friday 13 June until his release on Wednesday, August 6, 1969.

JRS has pulled this together by putting his hands on all the information he has been able to garner during the past 50 years. He had managed to grab and hide a police pen and when he was shifted from interrogation to solitary confinement kept a secret diary on toilet paper. But he was able to keep the diary secret for about three weeks only – and it was stolen from his cell on Day 20.

He was also allowed to take a Bible to prison so kept another record in it, as well as a calendar on its flyleaf. He used coded annotation to keep track of what was happening. Other entries in his Bible included poetry, coded notes, and transcriptions of Biblical text. Incidentally, in JRS’ notes about the day of his arrest, he writes this:

“When one of [the arresting policemen] found my old high school Bible on my bookshelf, he took it down and put it in my hand. He need never have bothered, and at the time I wondered why he was giving it to me, but it proved to be a life-saving gift, an unexpected act of improbable kindness. In response to my puzzlement, he said simply and quietly, ‘Where you’re going, you may need something to read. Keep it close to you and look after it.’ I have often wondered what his name was and where he might be living now. He was within my age range and is possibly still alive. Perhaps he will be one of those who reads this memoir?”

To tell his story, JRS has also used notes and letters to his family, including correspondence from his mother, who wrote to BJ Vorster.

JRS’ account is harrowing. He was never seriously beaten-up or physically tortured – he was a white detainee. But he was deprived of sleep for five nights and six days, forced to stand on a brick for those days and nights, then put in solitary confinement in the “Hanging Jail” (the Pretoria Central Prison complex, now renamed the Kgosi Mampuru II Management Area) where he listened most days to condemned men singing before execution, and he was held, as noted, for 55 days in solitary confinement.

Initially, JRS didn’t even know what the singing was for. “The warder who later collected me for the shower was a different person, someone I had not seen before. He spoke no English and looked like he had been crying. He was a young boy aged no more than eighteen or nineteen, and it looked like he had not started shaving yet.

“As we went down the corridor to the bathroom, I asked him in Afrikaans if anything was wrong: ‘Meneer, is iets verkeerd?’ [Sir, is anything wrong?] He explained that he had helped to officiate at the hanging this morning. Normally it did not worry him but today it did, he said, and he went on: ‘Die kaffer wat vandag opgehang is, was jonger as ek’ [The kaffir who was hanged today was younger than me]. He went on to explain that the people who sang through the night were the condemned, ‘die veroordeeldes’.

“We did not hear them on Friday or Saturday nights, he said, because the hangman did not work on the weekends. And now I knew whose voices had been consoling me and why they sang as they did.”

This is JRS on what happened when he arrived at the Kompol (police headquarters in Pretoria): “They made sordid jokes about my personal life and Jewish nose, and frightening threats about how much they would enjoy working me over. Then Richter produced a brick. He held it up in front of me, right in my face. I can still remember its detail – it was so close I could see its granular surface and I thought it so abrasive that it would score my face when he hit me with it.

“But he put it calmly down on the floor in front of me and told me to stand on it. His instructions were so bizarre that I did not move and simply stared, which produced more rage. There were fists in my face, and they tore at my beard and long hair. To this day I am reluctant to allow anyone to touch my face. There were so many of them. The violence was at its most intense as they drove me onto the brick at my feet.”

Sleep deprivation and solitary confinement leave no physical scars, as JRS writes, but obviously they leave many other kinds of scars. It’s probably no accident, therefore, that JRS, who’d be 72 or 73 now, is by all accounts an internationally respected psychotherapist at the Institute of Group Analysis, London, a Research Fellow, Birkbeck, University of London, has trained generations of group analysts, and 1985 was a Founding Trustee of Freedom from Torture.

This is the story of 55 days of his life. It is well worth reading, as wrenching as this might be.

[1] I had no contact with JRS since 1969. Then about a week ago I read about his new book and contacted him via Jonathan Ball Publishers. JRS remembered me but, as I say, he and I are still trying to work out how, where, and precisely when we met.

[2] What these “activities” might have been, I know not. Thirty years before my father had been an office bearer in the Pretoria Joint Council of Europeans and Non-Europeans and similar organisations and, somewhat oddly, in a 1971 London-published book of political reminiscences, The Autobiography of an Unknown South African by Naboth Mokgatle, he’d been specifically named (“E. Gordin”) as “the general secretary of several African trade unions” – which he had not been.

Who knows? Maybe my father had been involved in activities he chose not to share with his family.

[3] JRS had gone a few times to the United States Information Service in Central Johannesburg to look at entry requirements for future postgraduate study at an American university, and had befriended one of their information officers, Mohale Mahanyele. JRS invited him home for dinner and he brought with him one Winnie Mandela.

[4] Unna was approached by JRS’ mother to arrange leave for JRS’ brother who at the time was doing military duty in Israel. The SA government was then enjoying a period of toenadering with Israel – and Unna, when he heard what had happened to JRS, was able to arrange for him to be deported, provided JRS went straight to Israel (which he did). It seems, too, that by then the SB realised they’d made a “mistake” by arresting JRS.

Alas, poor Zweli, we thought we knew you well

Getting the shot, the Seffrican way

The Daily Insider: Even worse than a greedy capitalist is an ignorant bureaucrat

The key drivers behind the JSE delisting trend – Marius Strydom