He Does Not Die a Death of Shame by Jack Hoffmann. New Generation Publishing, 2019.

Bildungsroman is the (now somewhat overlooked) German-language term for a novel that focuses on the psychological and moral growth of a leading character (sometimes characters) from youth to adulthood; what’s generally called in English a “coming-of-age” story [i].

I can’t think of a more apt description for He Does Not Die a Death of Shame by Jack Hoffmann, a South African-trained surgeon in his late-70s who’s been living in Scandinavia for close to four decades [ii].

In the scribblings made while reading it, I see I wrote “a FULL-ON BILDUNGSROMAN this” and “No postmodernism bullshxt here”.

And, indeed, it is what I’d call an “old-fashioned” book in terms of its approach (respectful of its characters, readers and of history), its tone (serious), and its pace (unhurried). Yet, “old-fashioned” though it might be, one should not underestimate He Does Not Die a Death of Shame which, in its quiet and unassuming way, is exceptional and ambitious.

Here’s a very bald summary of the plot. The main protagonist is Zak Ginsberg, whom we first encounter as a very young boy, and who grows up in the SA of the 50s and 60s, becoming a doctor, and then – because he is trying to help the son of the domestic servant who cared for him and whom he loved as a little boy – Zak gets arrested and brutally tortured by the security branch. 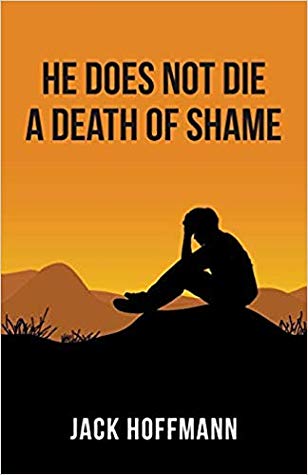 So, the protagonist on whose “psychological and moral growth” we are focusing is Zak. But Hoffmann has much bigger fish, or rather many more fish, to fry. First, we come to understand Zak’s mental and ethical growth by being shown the family from whom he comes – a Lithuanian (Litvak) father who has gone to South Africa to look for employment, and the family from whom he in turn springs, who do not escape the Holocaust that sweeps across the Old Country.

In addition, Zak’s journey through life is – later in the book – mirrored by the “journey” of the previously mentioned son of Zak’s childhood nanny. And Mpande Gumedi – the little boy with whom Zak played when he was a little boy – has, as you might have expected, joined the ANC underground, trained in the USSR, and returned to SA to plant bombs.

In short, the “person” on whose life’s journey we are focusing is more than one protagonist. Actually, this book contextualises, traces and lays out the history and zeitgeist of a generation (or many of them, at any rate): the children of immigrant Lithuanian Jews, born in SA in the 1940s, 50s and even 60s – while at the same time doing the same for a black generation (or many of them) also born in those years. And this contextualisation, at least in the case of Zak, also encompasses the Holocaust in Lithuania. Additionally, SA’s political history (do we Seffricans have any other?) is neatly interwoven throughout the narrative.

Hoffmann delivers all this with intelligence and balance. To take just one example: Zak’s “ethical values,” which cause him to want to “assist” Mpande, and which end in the horror of Zak’s arrest and torture, are not the fruit of some corny Hollywood-type vision or decision – they are, given the boy and young man with whom we have become acquainted, and given the family from which he comes, entirely natural and convincing.

What is most remarkable about this book is its texture and attention to detail. Early in the book (p. 130), Zak has a “conversation” with an “imaginary friend” – himself, his alter ego, or whom-you-will – who helps him sort out his thoughts and feelings and who will of course re-appear towards the end of the book.

I note this because it struck me that, in writing this book, Hoffmann (now in his late-70s, as mentioned) must have had numerous, attentive conversations with his earlier self. For Hoffmann’s recreation of that era – of what things were like, of what you saw, of how primary and high school “felt,” of what living in SA in the 50s and 60s was like – is well-nigh faultless.

Here is Zak’s experience in cheder, the afternoon school for Jewish children where’re they taught Hebrew, religious knowledge and prepared for bar mitzvah.

“One boy mumbles, ‘Can I fxck your daughter?’

‘Woss?’ asks the hapless Mr Gruber [an Eastern European refugee who might well be a learned man but, to make a living, must teach little monsters at a cheder].

‘Can I have a drink of water?’

Howls of ruthless laughter ring out.

I stare silently down at my desk during these exchanges, because they are cruel and because I think it strange to make fun of the man’s accent when most of our parents spoke English in the same way [198].”

For various reasons, I didn’t spend as much time at cheder in the 50s as Hoffmann apparently did, but I spent enough to know that this pen-picture of both the teacher and the boys is accurate to a fault.

In short, He Does Not Die a Death of Shame appeals so much to me because this intricately-fashioned portrait of a milieu and a history is – mutatis mutandis, as they say – my history; it is familiar and heart-warming.

And yet, given that the main part of this book is about the 50s, 60s, 70s and into the 80s, I can’t help asking: What about the me who lives in SA now, or what about any other reader – me, she or he who has been living here for the last 25 years or more and has witnessed the depressing failure of the great dream of the Rainbow Nation?

So many of the noble elements of the Struggle, those which propelled most of the people involved in it, have now been laid to waste or forgotten; and, this being the case, such motivations and “beliefs,” which are of course at the core of this book, feel distressingly quaint, like doilies from the 1960s.

In other words, this book could easily be disparaged by old (or even young) cynics as a “kumbaya book,” as Woke and sentimental.

I hope not. He Does Not Die a Death of Shame is a book of meticulous texture – the reader feels its characters’ experience and the grain of their lives. Above all, this book is extraordinarily compassionate – because it succeeds at entering and showing everyone’s lives without being judgmental.

This might sound sentimental, and doubtless is, but reading this book was “gentling” for me, and it feels entirely apposite that it was written by a doctor – a healer.

The book is available on Amazon, including Kindle, and other internet vendors such as Book Depository and Exclusive, and including other ebook formats.

[i] Some well-known examples are: The Life and Opinions of Tristram Shandy, Gentleman by Laurence Sterne (1759); The Story of an African Farm by Olive Schreiner (1883); Native Son by Richard Wright (1940); The Cider House Rules by John Irving (1985); and The Goldfinch by Donna Tartt (2013).

[ii] I’ve not met Hoffmann face-to-face, but we’ve exchanged emails. His book reached me because in the 1970s I played rugby and often drank (not water) with his brother Avi (Alvin), later to become a distinguished Israeli journalist, and with whom I’ve been in touch ever since. I think of Alvin so fondly because he introduced me inter alia to a trope that was standard in his life and those of his close friends [*]. This was that pub-crawling had always to be referred to in a sombre manner and had to be called “work” while what he and others pursued at the places where they earned a salary had to be known strictly as “play”. When proposing an evening jaunt, Alvin would say, “Time for some serious work; tomorrow morning we can play”.  A very important life lesson.

[*] Including family friend Ronnie Hope, inter alia translator of the extraordinary Rise and Kill First: The Secret History of Israel’s Targeted Assassinations by Ronen Bergman (2018) – which should be required reading for all those even vaguely interested in Israel/Palestine.

Not a bad spook book

Three metros do not a summer make

Science at war with itself

New Ford Ranger, locally built from ’22; Audi to offer EVs in SA – In the driver’s seat with Jarryd Neves

4 danger signs SA investors need to look out for