A Spook's Progress: From making war to making peace

From Making War to Making Peace

From the 1960s, Maritz Spaarwater was an intelligence agent for the South African government, first for Military Intelligence and later for National Intelligence. In the late 1980s, he was among the first to start official discussions overseas with the exiled leadership of the ANC, and he became involved in the negotiations that led to the 1994 election. This is his story.

A Spook's Progress plays out in a range of locations, from army bases in Namibia to the NIS offices in Pretoria, from the dusty streets of Freetown to the luxury of Geneva. Threaded through the narrative are encounters with people such as Sam Nujoma, Kenneth Kaunda, Niel Barnard, Roelf Meyer, Chris Hani, Thabo Mbeki and Jacob Zuma.

An honest depiction of day-to-day life as a spy, the book delves into the relationship between intelligence agents and their political masters and reveals their behind-the-scenes role in facilitating the transition.

At times serious, at times ironic and satirical, A Spook's Progress is a fascinating and frank account of an intelligence agent's life and work, and his shift from making war to making peace.

Maritz Spaarwater was a senior member of various intelligence agencies in the apartheid era, first with Military Intelligence, and thereafter with the National Intelligence Service and the Constitutional Development Service. He holds degrees in law, international relations, international law and translation studies from the universities of Pretoria, Witwatersrand, Cambridge and Stellenbosch. He has practised law, is a sworn translator of the High Court and has dabbled in local and national politics.

The book is available in bookshops nationwide (see cover below). For more details click here. 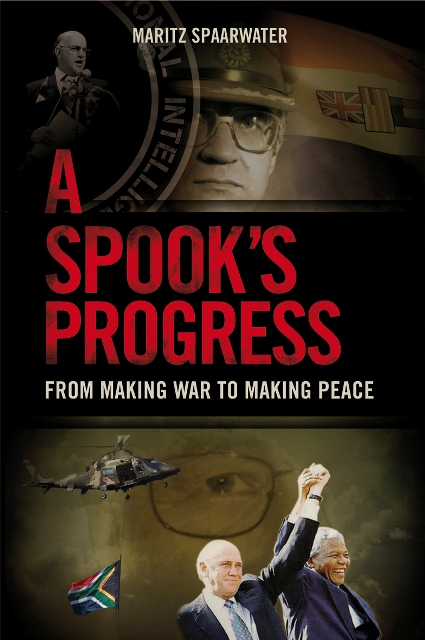