Putting your money where their mouth is

Rich and poor are paying for the ANC’s election campaign

In writing on the South African economy, it has become customary to ritually list a litany of ills. The chant goes something like this: high unemployment (particularly for the youth). Low growth (particularly in important areas). Lack of capital formation, no lack of labour disputes. SOE’s, state capture and corruption. For ever and ever.

Given its ample supply of problems, it should not be surprising to see political parties making much of the economy in the approach to the 2019 election.

What is, however, surprising is how few actually do so.

And the fact that, when economic challenges are mentioned, it is often to provide justification for counterproductive policies which are far more likely to exacerbate these challenges than present any sort of solution. In this respect, the ANC serves as a key example.

In his foreword to the ANC’s 2019 election manifesto, President Cyril Ramaphosa often mentions the economy. The economy is not on the ANC’s policy radar for purposes of supporting it, however – quite the opposite. 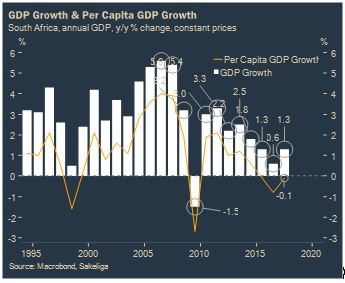 Instead of showing awareness of the serious challenges many businesses in the country face (many of which are increasingly due to excessive, contradictory and contrived regulation by the state) the ANC seems to seek to manipulate the economy to achieve a set of social and political goals.

These goals include the creation of additional SOE’s (e.g. state pharmaceutical company), the institution of mandatory investments in state projects and institutions, and the politization of monetary policy – any one of these policies would, by itself, pose a serious danger to the stability of South Africa’s economic sphere.

These are only a few of the risky policies conceived by the manifesto – the ANC, it seems, considers the economy an inexhaustible packhorse, capable of carrying heavier and heavier compliance burdens and interference.

Considering the adverse effect this is likely to have on the development of the South African economy as a whole, this is far worse than merely dumping money into the economy with one hand to tax away with the other. Instead, these costs may have a serious adverse impact on the South African economy, limiting opportunities for all for many decades.

A number of such counterproductive policies already exist in the South African political mainstream (if nowhere else in the world). If the ANC government keeps up with its costly policy blunders, It is only a matter of time before the weight completely exhausts the productive sectors and institutions in society.

There’s no such thing as a free lunch – and if a politician claims to be handing out free lunches, it would probably best to pat yourself down and check your pockets. It’s free, because you’ve probably already paid for it.

If we intend to co-opt the private sector for new, exciting and, frankly, ill-advised policies, we must be prepared to pay the price. The same resources we waste on buying the ANC votes, could have been used by the private sector to improve South Africans’ lives in a real, tangible way.

There is good reason to believe that we have already reached the point where South Africa cannot afford to further inhibit the private sector. Consider the growth of the economy – and the challenges we face in competing internationally. GDP growth, which is in itself weak, has not kept up with population growth. Per capita growth in GDP has been negative since 2015.

Government’s attempts to achieve equality have long since become counterproductive.

It would have been far better for government to use the private sector in the ways which it is best suited to – amongst others by allowing it to create jobs and improve production without an excessive regulatory or tax burden.

If South Africa were able to achieve higher levels of job creation, the real poorest of the poor – including those in the 27% of the labour force who are unemployed – would be the ones to benefit.

It should be clear, then, that these policies – far from just costing the rich in terms of money – also cost the poor and destitute in terms of employment, a more expensive cost of living and a lack of opportunity.

But these costs, in particular, are far from obvious.

The subtle danger with the ANC’s social-political goals are that, though the benefits and beneficiaries are immediately visible – the costs are diffuse and spread throughout the economy.

The ANC is banking on this fact – giving large benefits to specific groups of people (whether the poor, certain industries, cronies, or others) and spreading the costs across the South African populace.

So, do yourself a favour and read through the ANC’s election manifesto and make a note of every promise it makes.

After all – whether you’re rich or poor – you are the one paying for them.

Daniel du Plessis is a legal analyst at Sakeliga, an independent business community.

Why the Jobs Summit was doomed to fail

I have seen the future and it frightens me

Good (but for some, unwelcome) news about racism in the UK

The end of a strange luncheon

I have seen the future and it frightens me

An insult to glaciers

Kokkie Kooyman on the departure of Daniel Mminele from ABSA

Piet Mouton on the SA economy and PSG stable

Success: What is it and does a high IQ help?

"Piet Mouton on the SA economy and PSG stable" - BizNews