Last week the executive mayor of Cape Town, Dan Plato of the Democratic Alliance (DA), berated the African National Congress (ANC) for "banging the racist drum" over the incident on a beach at Clifton two days before Christmas last year.

In a statement to a parliamentary committee, Mr Plato said that there had been no racism when two private security officers asked people on the beach to leave because it was not safe after dark. Yet Faiez Jacobs, the ANC's Western Cape provincial secretary, had issued a media release with accusations about "reintroducing apartheid". This was "deliberate misrepresentation of the incident". "With elections around the corner," Mr Plato went on, "we are expecting to see more dangerous race baiting and political opportunism".

Not long after the Clifton non-incident, DA officials in Schweizer-Reneke were guilty of race baiting like that which Mr Plato last week condemned. This was highlighted at the time by Solidarity, which challenged the leader of the DA, Mmusi Maimane, to repudiate the conduct of its federal youth leader, Luyolo Mpithi. Far from doing so, Mr Mmusi chose to portray his youth leader as one of the "victims" who had "dishonestly" been "lumped in" with the ANC and the Economic Freedom Fighters (EFF). According to Mr Maimane, "all" that Mr Mpithi ever did was commit to seek answers, to understand, to ask questions, and to listen. 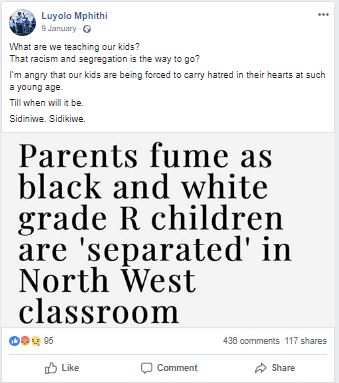 This is untrue. In a statement issued on the day of the incident at the Laerskool Schweizer-Reneke, Mr Mpithi strongly condemned the alleged separation of black and white pupils at the school, which he went on to describe as "outrageous" and "unconscionable". Having already pronounced judgement and published a photograph of the pupils sitting at different tables, he announced that he would travel to the school the following day to "demand answers". A few days later the DA's national spokesman, Solly Malatsi, claimed that his party had gone to "seek answers about this matter without any preconceived notions".

Subsequently, after the Labour Court had ordered the reinstatement of Elana Barkhuizen, the teacher who had been suspended, the DA's candidate for premiership of North West province, Joe McGluwa, claimed that the DA had visited the school on a "constructive fact-finding mission to establish the facts of the matter, not to prejudge". Like Mr Maimane's statement, this is disingenuous, because Mr Mpithi had already issued judgement.

We now have the leader of the DA, its national spokesman, its candidate for a premiership in the forthcoming provincial elections, and its federal youth leader issuing statements to the media which gloss over the fact that that very same youth leader had prejudged the issue before he went near the school on his subsequent "fact-finding mission". Mr Maimane even had the gall to proclaim that he did not accept "the actions of those who leapt in to inflame the situation for their own political gain". Yet this is precisely what his youth leader did.

Mr McGluwa accused the ANC and the EFF of having "sought to irresponsibly inflame racial tension", while his own party "believed at all times that due process should be followed". Like Mr Maimane, Mr McGluwa is accusing the ANC and the EFF of doing what the DA's own youth leader did. As for "due process", the DA wasted no time in welcoming the suspension of Ms Barkhuizen prior to the "investigation that will follow".

According to Mr Maimane, there are victims "all over the story", among them the "traumatised children," their parents, and the school. They also include Ms Barkhuizen, "who suffered the kind of swift mob justice that so often accompanies these stories". Yes indeed, but the DA played its part in the inflicting of "mob justice". For Mr Maimane to depict one of the offenders, his own youth leader, as among the "victims" is perverse.

As has been said in other contexts, the cover-up can sometimes be worse than the original offence. This applies to the DA's statements about its own role in the infamous attack on the honourable Ms Barkhuizen and her school. Worse than the party's rush to judgement, is its leader's misrepresentation of what its officials actually did.

* John Kane-Berman is a policy fellow at the IRR, a think-tank that promotes political and economic freedom. Readers are invited to take a stand with the IRR by clicking here or sending an SMS with your name to 32823. Each SMS costs R1. Ts and Cs apply.

An Act of wanton cruelty

The ANC's no growth plan