Raj Rage as the Jewel in the Crown approaches its 70th

INGLORIOUS EMPIRE – What the British did to India by Shashi Tharoor (Hurst & Company, London, pp.295 £20. in UK

Soon it will be the 70th anniversary of India’s Independence from Britain.  Expect a tsunami of memoirs, newspaper articles, television and radio plays aimed at people in Britain who probably know next to nothing about their own history, yet alone the events in India that led to its ‘tryst with destiny’ at midnight on August 14/15, 1947.

How we all wait with baited breath to slurp our cokes and gobble up our popcorn in darkened cinemas to see Gurinder Chadha’s latest film, which received so many bricks and even a few bouquets at this year’s Berlin Film Festival.

Viceroy’s House is damned with praise by one leading film critic as a ‘soapy but watchable’ account of India’s birth agonies.

But it could be a hit with the young because of Chadha’s cult status as the woman who gave the world Bend it like Beckham.

Radio journalists and TV producers are already preparing for the 70th.

Those with tears to shed, shed them now.

So a big round of applause of Shashi Tharoor, one of India’s best known celebrity historians, politicians, authors. He’s an erstwhile human rights campaign who finds it hard to resist the limelight. 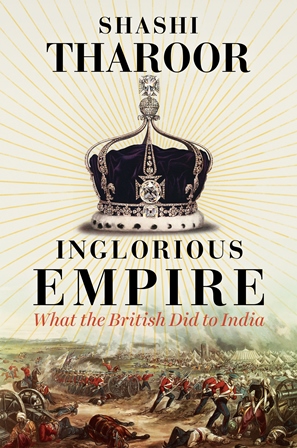 His new book Inglorious Empire underscores, if needs be once again, his belief that Britain sabotaged Indian industries to its own advantage from the time of the East Indian Company in 1615 to the end of the Raj 332 years later.

The easy to read book is divided into eight chapters detailing some of the pros but most of the cons that led to the economic destruction of India.

Chapter headings include  .. .The Looting of India . . .Divide Et Impera . . .The Myth of Enlightened Despotism . . .The Messy Afterlife of Colonialism.

You don’t have to be a rocket scientist to know where this man’s coming from.

It’s a need to read now work that deserves a place on the shelves of schools, colleges and universities – especially so in Britain with its current obsession about the Tudors and Adolf Hitler’s Third Reich.

My big complaint is levelled at the publishers. There isn’t a single map or picture in a book crying out for lots of them.

About the scandal prone author, there’s always a lot to say. Look him up for yourself if you’re in unsubstantiated gossip and rumour.

Shashi Tharoor is a member of the Indian National Congress and he has written 14 bestselling books. He has also published a biography of India’s first Prime Minister, Jawaharlal Nehru, seven non-fiction works, plus two books of photographs about India. Until be entered politics in 2009, he wrote a weekly column ‘India Reawakening’ that was syndicated in 80 newspapers worldwide. He has 2.69 million people who hear what he has to say on Twitter, so he knows a thing or two about the media and marketing.

Yet despite being so media savvy, the way his latest book came to be born surprised even him.

At the end of May 2015, he was invited by the Oxford Union to speak on the proposition ‘Britain Owes Repatriation to Her Former Colonies.’ He spoke for eight minutes. When the Union posted the debate on the web, it went viral.

He writes:”Right-wing critics of mine suspended their ‘trolling’ of me on social media to hail my speech. The Speaker of the lower house of the Indian parliament, the Lok Sabha, went out of her way to laud me at a function attended by the Prime Minister, Narendra Modi, who then congratulated me for having said ‘the right things at the right place.’ Schools and colleges played the speech to their students; one university, the Central University of Jammu, organized a day-long seminar at which eminent scholars addressed specific points I had raised. Hundreds of articles were written, for and against what I had said.”

His publisher told him to get cracking and much of this interesting book is an expansion of what he said at Oxford two years ago.

He told wide-eyed students that India’s share of the world economy dropped from 23 to four percent during the centuries that divide the cruel arrival of merchant pirates from the “Honourable” East India Company in the early days of the 17th century to the end of the British Raj.

He asserts that Britain owed a debt of £1.25 billion to the Indian government at the end of the 1939-1945 war for the 2.5 million Indian volunteers who had fought the Axis powers and that the UK never paid up.

The respected historian Patrick French commented: ”Like a surface-to—air missiles he locked onto the spot where he knew his well-heeled Oxford Union audience would be most vulnerable: post-colonial guilt. It did the speaker no harm that his voice is of an orotund type heard in early television documentaries about the royal family. Tharoor told an Indian TV anchor that so many of the audience trooped through the ‘yes’ lobby in support of his reparations motion that the ‘swank dinner’ following the debate was delayed.”

As said, this book is a continuation and widening of his ear-catching and historical perspective-changing speech at the Oxford Union.

London, take this: “Britain’s Industrial Revolution was built on the destruction of India’s thriving manufacturing industries. Textiles were an emblematic case in point: the British systematically set about destroying India’s textile manufacturing and exports, substituting India’s textiles by British ones manufactured in England. Ironically, the British used Indian raw material and exported the finished products back to India and the rest of the world, the industrial equivalent of adding insult to injury.”

Bradford, take that: ”Indian textiles were remarkably cheap – so much so that Britain’s cloth manufacturers, unable to compete, wanted them eliminated. The soldiers of the East India Company obliged, systematically smashing the looms of some Bengali weavers and, according to at least one contemporary account (as well as widespread, if unverifiable, belief) breaking their thumbs so they could not ply their craft.”

The result of the destruction of artisnal industries by colonial trade policies did not just impact the artisans themselves.

Tharoor’s short but devastating chapter The Looting of India is the platform upon which the rest of this book stands.

His version of the various Indian uprisings, the arrival of Benjamin Disraeli (who coined the phrase The Jewel in the Crown) who raised Victoria’s rank to Empress to rival the title of the Russian Tsar who was casting envious eyes on the British in India, the creation of the Indian National Congress (by an Englishman, not an Indian) and then the endless conferences, promises, half-promises and agreed sets of lies that make up official histories, have all been told before.

Tharoor should have stuck to what he does best – explain hard to grasp economic problems in an easy to understand way.

After facing political problems in public and personal scandals at home he –like India – wonders what’s up next.

Certainly, this (at times) ragingly anti-British book will do its author no harm among India’s young, ambitious angry young men and women who watch, with fixed smiles on their faces, as the  great grandchildren of the long gone Raj line up and beg for a special economic deal with the surprisingly wealthy county. Wealthy for some, that is.

Trevor Grundy is a British journalist and author.

The Afrikaners' fight for survival