Andrew Donaldson on NDZ, our Cheshire Cat with nine lives

I AM sometimes puzzled that the deputy president, David Mabuza, is referred to as “The Cat”. He is not covered in fur and, unless he is hiding it, doesn’t appear to have a tail. Perhaps he is able to clean himself in an unusual manner.

Some claim the nickname is a reference to his survival skills, but I am not convinced. Cats are said to have nine lives because of their ability to drop from a great height and always land on their feet. They are hardy creatures and appear to avoid serious injury. This hardly applies to Mabuza. He has only the one life, admittedly a charmed one, but it’s unlikely that he will be falling out of a building anytime soon.

When he was premier of Mpumalanga, from 2009 to 2018, the province was not only regarded as the country’s most corrupt, but also one of the most dangerous for scrupulous party members. As The New York Times reported after Mabuza’s ascendancy to central government: “Nearly 20 politicians, most from inside the ANC, were assassinated in the past two decades, some after exposing graft in public works projects.” It is doubtful that Mabuza was ever in danger of such a fate in all that time, and his political career flourished, his rise untroubled by the sort of stumbling blocks that come with oversight and scrutiny.

In fact, if anyone has nine lives, it is Nkosazana Dlamini-Zuma, the uncooperative cooperative governance and traditional affairs minister. She has been implicated in some of the worst political scandals of our democratic era, and yet has emerged unscathed from them all.

Even more striking, at least as far as readers of Lewis Carroll’s Alice’s Adventures in Wonderland are concerned, is Sarafina-Zuma’s growing resemblance to John Tennier’s classic 1865 illustration of the Cheshire Cat. 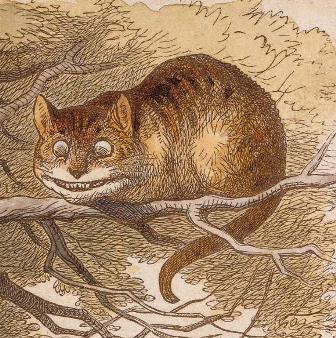 For those unfamiliar with the story, one feature of this feline is the gradual disappearance of its body, leaving only a last visible trace — its manic grin. In much the same way, Nanny-Zuma’s contemptuous sneer is one that smokers can never forget, and calls to mind the Cheshire Cat’s iconic response to a bewildered Alice: “We are all mad here.”

It certainly seems that way, what with the bizarre postponement this week of the court action by British American Tobacco SA and other groups against Nanny-Zuma’s smoking ban. The matter was to be heard on Tuesday, but after an apparent directive by Western Cape Judge President John Hlophe, is now set down for sometime in August.

Such developments will not endear Chairperson Miaow to very many South Africans. But she has her champions. One is the aforementioned Mabuza, who came to her defence during a Q&A session in the National Assembly on Thursday. Along with her colleagues, he told MPs, she’d been directed “to work out regulations every time we make a movement between levels of the lockdown. The minister is just doing her job, like any other minister. The president is still the president. He is commanding the command council and the Cabinet. Nothing has gone wrong.” The jury may beg to differ. With more than one of those assertions.

Virodene-Zuma has also drawn support from Khadija Magardie, head of speechwriting in the Presidency. Writing in the Daily Maverick, Magardie grumbles that, with Winnie Madikizela-Mandela out of the picture, the minister is now a new “Angry Black Woman … [South Africans] can all hate”. But this is wrong. She’s not an angry women. She has no cause to be angry. Or even mildly irritated. It’s the patronising tone that most people find objectionable.

The attacks on social media and in the press are beyond the pale, Magardie argues. “The depictions of the minister go far beyond rational critique. They are racist. They are sexist. They are ageist. They are shameful.” Happily, this broad range of crimes does not include a suggestion that Proxy-Zuma may look like a kitty. But one particular passage in Magardie’s polemic did give me pause for thought. She writes:

“That the regulations should be critiqued and challenged in court is the hallmark of a constitutional democracy. Quite another is her portrayal as an unqualified doek-wearing diablo out to single-handedly destroy the civil liberties of the republic with her red pen. Taken even further, others reduce her to being somebody’s former wife, and therefore beholden to interests beyond the realm of her position.

“Were one to even overlook the latent sexism in reducing a woman to her marital status, only the wilfully myopic cannot see the misogyny and racism that has crept into the ad hominem attacks on Dlamini-Zuma, and that it has been worryingly normalised.”

Can this be? Spanish for “devil”, diablo is a masculine noun. Can it be used to describe a woman, especially in a diatribe accusing all and sundry of sexism? I wonder if the prime minister is aware that her chief speechwriter has issues with gender.

The lockdown has led to alarmingly aggressive behaviour among rats. When restaurants closed, street garbage disappeared. Unable to feed themselves, dumpster-diving rodents turned on one another, eating their young. The survivors of this cannibalistic frenzy are now invading kitchens in homes. Apartment block infestations have increased dramatically in New York and Chicago. In Sydney, residents have been warned of “a new rat plague”.

In Paris, where the problem is a heated issue in this weekend’s mayoral elections, “citizen rat brigades” have been stuffing dry ice pellets into the rodents’ burrows in parks and gardens. The pellets evaporate as carbon dioxide, putting the rats to sleep underground in what is regarded as a humane extermination method.

Dry ice, however, will not have much effect on Johannesburg’s rapacious vermin. Deprived of their usual source of sustenance, the city’s Metro cops have rounded on street traders and vendors with shocking ferocity. Businessman Itumeleng “Sandwich King” Lekomanyane has taken to Twitter to share his frustration in dealing with these bullies. For him, it has been a nightmare of extreme pettiness, cruelty and spite.

Lekomanyane has a small franchise, Sandwich Nton Ntons. He has the necessary permission to sell pre-packaged food, fruit juices and snacks in the bustling Marshalltown area, but his “franchisees” are routinely set upon by JMPD goons who steal their stock and dole out ludicrous fines. A notice issued by one K Semenya (peace officer number 30053307) describes the impounded goods: “01 x half grate of sandwidges”.

In addition, there’s a R1 600 charge for impounding the sandwiches and R300 for storage. Scrolling through Lekomanyane’s tweets, it appears the customary “cooldrink” solution was considered, but he refuses to pay bribes to run a legitimate business. When he approaches the municipality to sort out the matter, some dull-eyed sluggard behind a desk apparently recites back a list of regulations, a form of torture clearly intended to drive people mad with bureaucracy.

Lekomanyane’s experiences are by no means unique, and it is worrying that many of his followers on social media believe the cops’ actions are part of a wider plot to drive honest traders from the downtown area to make way for unscrupulous foreigners who are prepared to line the pockets of corrupt cops in order to set up shop. Both small business development minister Khumbudzo Ntshavheni and trade and industry minister Ebrahim Patel have yet to comment on this travesty. But their shameful silence is not surprising. The only hope, then, is that when cops have eaten the Sandwich King out of business and can no longer gorge themselves on his stock, these pests will devour one another.

Like other publications, the Mail & Guardian has dropped the paywall on its online Covid-19 reports. “All our essential coronavirus coverage,” it says, “is free for all readers.” Accordingly, and provided he stays on topic, it is now possible to read Eusebius McKaiser without having to subscribe to this worthy NGO newsletter.

“I seldom drink coffee,” McKaiser writes in a recent column, “but this morning I felt like a hot cup because of this cold winter weather. When my colleague brought me a cup of coffee at work, I immediately wondered aloud about which part of the cup’s rim to sip from to minimise the possibility of being infected because I do not know who else had used the cup and whether it had been thoroughly cleaned with nice hot soapy water before the coffee was made.”

It is unclear why this is essential coverage. But it does raise concerns about hygiene at Primedia and may offer insight as to why McKaiser has resigned as a Radio 702 presenter. Here at the Slaughtered Lamb (“Finest Ales & Pies”), we have queries of our own. Does McKaiser not have his own cup? Can he not make his own coffee? Why the mistrust of colleagues, especially those who wash the crockery? All in all, this episode appears to cast a leading public intellectual in a very poor light.

Marius Roodt, campaign manager at the Institute of Race Relations, declares his opposition to an independent Western Cape. Writing in The Friend, the IRR newsletter, he warns that, though “dismissed by most as the notion of a lunatic fringe”, it is one that “will soon gain a foothold in the mainstream” should the government persist in its muddled ineptitude. Putting South Africa on a path of economic prosperity, he argues, will cruelly snuff out the dreams of the secessionists.

But the case for Spesbona’s independence is strong. The grace and diversity of its peoples and cultures set it apart from the rest of South Africa. Despite years of ANC hostility, DA rule has given the region a taste for institutional governance that is lacking elsewhere. The tourism and agricultural sectors are in rude health and provide economic security. This too bolsters the cause for self-determination.

In fact, the outlook for Spesbona is such that it will clearly be the envy of neighbouring territories, especially when universal basic income is introduced. Perhaps a “points” system, similar to Australia’s, needs to be in place for “refugees” seeking permanent residence. Among other things, applicants may be judged on their educational qualifications, barista skills and ideas for Pride parade costumes.

It is unfortunate that Roodt dismisses all this. But one needn’t despair. These days, anything the IRR says or does is instinctively dismissed by the wide awoke as being counter-transformational. Populist support, then, for Spesbona is almost certainly guaranteed, and the clamour for independence could be considerable simply because the institute is against the idea. It’s only a matter of time before Africa’s newest country is welcomed to the global village.

Oxford falls to the Fallists

Kicking over the statues