I am in the Service of the Department of Health Northwest Province as a Specialist Forensic Pathologist.

I am registered with the Health Professions Council of South Africa as a Specialist Forensic Patholigist [MP No.: 0442003]

The following injuries were present as documented in the autopsy report, Page 2, Paragraph 4.

1. Abrasions of the forehead were present, extending from the midline of the forehead, across the right side, around the right eye and extending to the right cheek, covering a total area of 150x130mm. The abrasion shows features of a ‘brush’ or ‘graze’ abrasion, showing linear grazes of abraded skin with partial contusions.

2. There was contusion and swelling of the right eye.

a. This is a periorbital haematoma or a ‘black eye’. Blood has collected in the soft tissues of the right eye. (Refer to attached reference – page 179) [1. Saukko, P. (2004). Knight’s Forensic Pathology, 3Ed. Hodder Education.]

a. Abrasions have been described above. A contusion is commonly known as a bruise, is a form of blunt force trauma. It is .caused by bleeding from blood vessels beneath an intact epidermis.

4. Abrasion, of the left side of the skin of the upper lip, extending to the left cheek were present, measuring 55x20mm.

5. Oval abrasion of the right side of 'the chin was present.

6. A circular contusion of the midline of the lower chin was present.

7. Feint abrasions of the left side of the chin and left lower jaw were present measuring 10x8mm and 18x8mm.

8. Petechial haemorrhage of the right side of the inner lip and contusion of left lower gum were present.

a. These are small pin-point bleeds beneath the surface of the skin.

8. Graze abrasion of the inner aspect of the .right forearm-was present, covering an area of 180x30mm. Surrounding contusion was present.

b. Graze abrasions or brush abrasions are scrapes of the skin over a larger area. (Refer to attached reference - page 138)

10. An irregular area of abrasion of the medial part of the right upper arm, near the axilla, was present. The wound measured 30x20mm.

11. An irregular abrasion of the left upper back, near the left shoulder, was present. The wound showed features consistent with a graze or brush abrasion and measured 70x20mm.

12. An oval abrasion of .the posterior .left upper shoulder measuring 10x10mm was present.

13. A linear abrasion of the left occipital scalp was present. The lesion consisted of two linear parallel abrasions measuring 20x15mm.

16. Two small linear abrasions of the right upper back were present · measuring 5mm.

17. Two linear abrasions of the left lower back were present measuring 15mm and 10mm.

a. These are small circular abrasions possibly caused by fine gravel or stones

19. A deep abrasion of the right lower lateral abdominal wall was present. The wound was oval in shape measuring 80x45mm.

20. Two circular abrasions of the anterior left knee were present The wounds measured 10x10mm and 20x·10mm.

21. Small oval abrasions .of the left elbow were present.

23. Linear non-patterned abrasion of the dorsum of the left wrist was present. The abrasion measured 25x10mm.

These injuries are consistent with injuries due to a fall or jump from a moving vehicle. In my opinion, it is more probable that the deceased fell from the vehicle, as the protective, defensive types of injuries were not noted during the autopsies.

These protective mechanisms would include injuries to the outstretched hands/limbs e.g. abrasions to the palms, fractures of the wrist/forearm, referred to as the protective extension reflex which protects the head.

Signed at POTCHEFSTROOM this 22nd day of September 2017

I certify that the deponent has acknowledge (sic) that he/she knows and understands the contents of the above declaration, that he/she has no objection to taking the prescribed oath and considers it to be binding on his/her conscience.

Thus signed and sown to before me at Potchefstroom on this day of 22nd September 2017.

Diagram of the injuries on the body of Matlhomola Jonas Moshoeu according to Dr Moorad's report on the autopsy carried out on 28th April 2017: 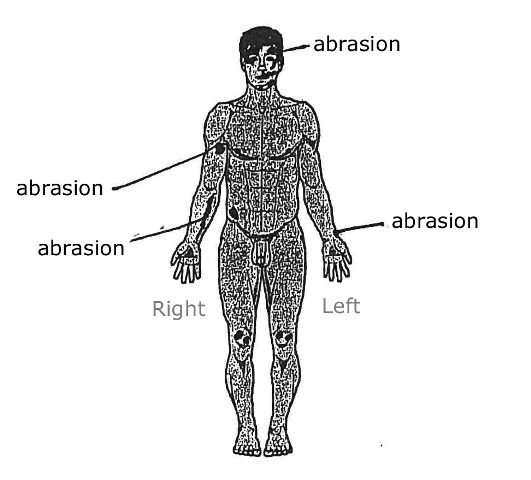 The Coligny case and the autopsy issue

The curious case of the Coligny trial