Some rough notes, and graphs, on the progress of the epidemic in South Africa so far

On Wednesday Minister of Health Zweli Mkhize reported 803 new confirmed cases of Covid-19 in South Africa. From just a handful of cases of local transmission at the start of the lockdown – most cases up until that point having been imported + close contacts – South Africa is now seeing an average of over 800 such cases per day. 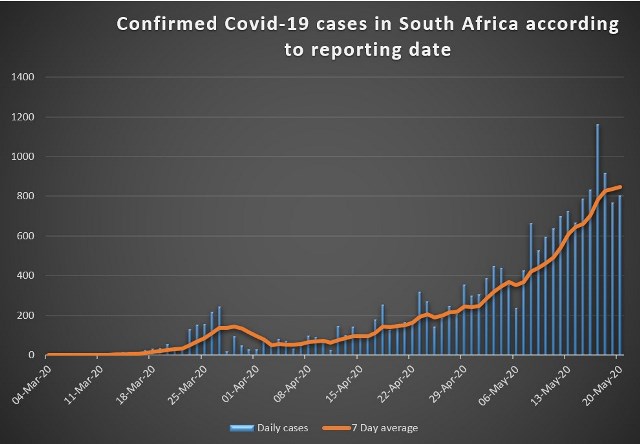 It was always likely that as a respiratory illness caused by a coronavirus there would be a strong seasonal element to Covid-19. As Western Europe has moved into summer the number of newly recorded infections has steadily declined, aided by the building up of some immunity in the population, as well as social distancing measures.

This trend has allowed most European Union nations to start relaxing restrictions. Conversely, as South Africa has moved into winter, and the initial phases of the epidemic, the number of confirmed daily cases has steadily increased, despite one of the world’s most socially and economically punishing lockdowns.

Over the past week the number of daily recorded Covid-19 cases in South Africa has started exceeding, for the first time, those reported in France, Italy, Spain, Italy and Germany – all countries which reported raging epidemics in late March. 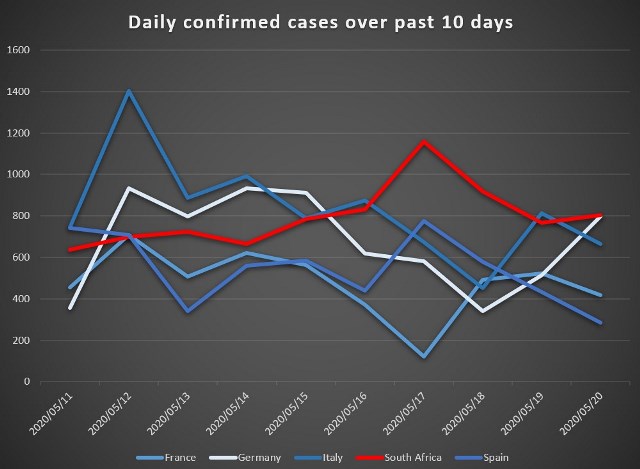 The current “seen” epidemic in South Africa is centred in the Western Cape, and Cape Town in particular. All metrics – reported cases, hospitalisations, ICU admissions and deaths –indicate a province already in the midst of a serious epidemic. A month ago the province was reporting well under 100 cases and a couple of deaths per day. On the 21st of April 2020 there were 39 patients with Covid-19 in the province’s hospitals and 17 in ICU.

Since then there has been something like a ten-fold increase on all these measures. Several hundred new cases are being confirmed per day and, as of 20th May, 470 Covid-19 patients were in hospital, with 143 in ICU. 28 deaths were also reported for the day. Hospitalisations, ICU admissions and deaths are all lagging indicators. It is probable that the number of new infections, per day, is running far ahead of the DA-controlled government’s ability to identify them. The Eastern Cape also appears to be experiencing a serious epidemic, though this is occurring much more under the radar.

If one splits out the figures for these two provinces from the other seven nothing much seems to be happening in the rest of the country, in terms of confirmed daily cases. The Gauteng provincial government confirmed all of 18 new cases on Wednesday. There have been 27 deaths in that province so far, and there are currently 54 Covid-19 related hospitalisations. These two measures put Gauteng where the Western Cape was on about the 23rd of April. 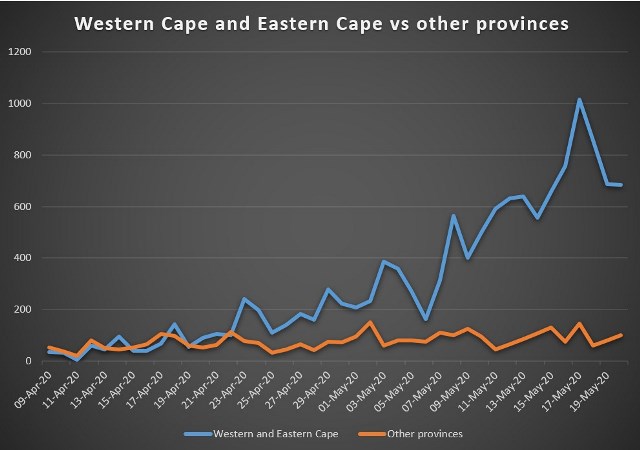 Given that the epidemic was seeded first and most widely in the Western Cape by foreign visitors, it is probable that the epidemic in the province is indeed some weeks ahead of the rest of the country. The province also has the most functional and transparent government in South Africa, and it is compiling and releasing the most comprehensive and reliable data. The question is what is really happening on the ground in the other seven provinces?

In the early stages of the epidemic very few tests were conducted in public sector laboratories, and strict requirements applied, which hindered the identification of cases of community spread. The requirements were loosened in early April, and testing ramped up, and these have been running at between 8 000 to 10 000 per day since the 8th of May. This is nonetheless far fewer than the 36 000 per day earlier promised by the NHLS for late April. 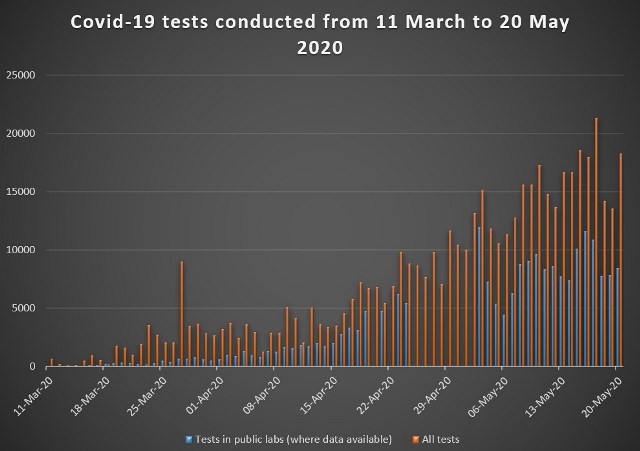 Of the 27 132 tests processed by public and private sector laboratories in the Western Cape over the past seven days 4 878, or 18%, came back positive. The figure for tests conducted outside of that province is under 2%.

From various reports it does appear that while a lot of “screening” has been done by Community Health Workers this has failed to pick up many Covid-19 cases. However, many people were referred for testing who should probably not have been, and this has ended up contributing to a huge backlog in the laboratories.

Western Cape Premier Alan Winde was quoted in the Washington Post recently as saying that his province had a backlog of 11 000 tests, and Johannesburg 15 000, with it taking from between 6 and 10 days to get a result. This is far too slow to get ahead of the epidemic – as South Korea for one managed to do - through identifying individuals with the virus, and then those they may have infected, before further infections can take place.

An absence of positive test results in an area in the early stages of an epidemic can mean one of two things. Either the disease is not there. Or the disease is there, but clusters are not being successfully identified and isolated, which is allowing the disease to seed itself unchecked.

It is very likely then that there is already a significant “unseen” Covid-19 epidemic in South Africa, especially in areas with dysfunctional ANC-controlled administrations. Even tracking Covid-19 related deaths or hospitalisations require the identification, through testing, of those who are severely ill with the disease.

One of the early unknowns about the epidemic in South Africa was whether it would be blunted, to some degree, by its much younger age profile. Very early indications are however that Covid-19 related fatalities in South Africa are skewing towards the middle-aged.

The age profile of deaths will be affected, to some degree, by the age profile of the population, and of those who caught the disease. But what is striking are the absolute numbers. Germany has had ten times more confirmed cases, and twenty-five times more deaths than South Africa. But South Africa has already had 61 deaths from the disease of people under the age of 50, compared to Germany’s 87, Spain’s 290 (out of 18 912 deaths) and Italy’s 388 (out of 30 332 deaths).

This is an ominous sign for the months to come. 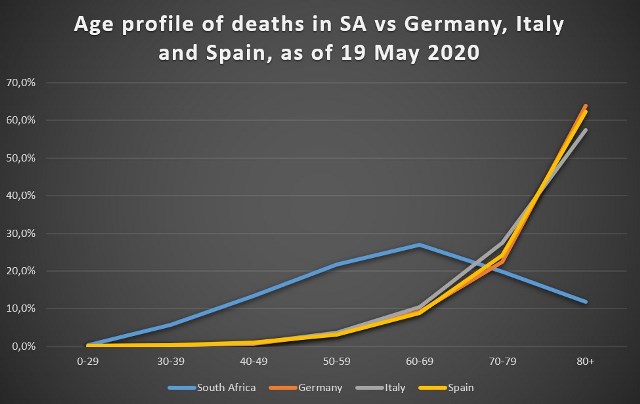