Crime and punishment in contemporary SA I

This is the first brief in a series of five. It sets the scene for an analysis of quantitative information of the criminal justice process, presented in the second, third and fourth briefs. The fifth brief offers some concluding remarks.

The purpose of this series of briefs is to assemble and assess quantitative information on the working of the criminal justice system from crime to punishment. It would be desirable to have a complete set of crime and criminal justice accounts, as Australia does. The Australian Bureau of Statistics has a division of crime and justice statistics which publishes data on crime victimization, recorded crime, criminal courts and corrective services, as well as more specialist reports, for instance, on domestic violence and drugs. South Africa does not have a publicly accessible, centralized and comprehensive system, and there are significant gaps in our knowledge. Nonetheless, published information includes:

Annual reports of the Department of Justice and Correctional Services.

Data from these sources for the five years from 2014/15 to 2018/19 have been assembled into an Excel workbook (to inspect, click here). These data are drawn on in the analysis which follows.

In order to interpret the data, one needs a model of the system. The model takes the form of the flow chart below. 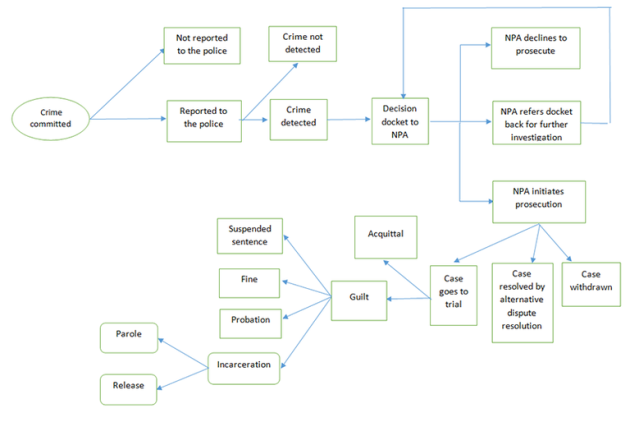 The type of crime. SAPS crime statistics divide community reported into seventeen main categories and crimes detected as a result of police action into a further four.

The appropriate court. Criminal matters are heard by high courts, presided over by a judge, and regional and district courts presided over by a magistrate. The gravest crimes are referred to high courts. Regional courts may impose imprisonment for up to 20 years (or life for rape and murder) and impose fines of up to R 300 000, and deal with the most serious crimes not referred to the high court. District courts may impose imprisonment for up to 3 years and fines up to R 100 000. They cannot try crimes of murder, treason, rape, terrorism or sabotage. Between 2014/15 and 2018/19, 0.2% of crimes referred to the courts were dealt with by the high courts and 7.0% by the regional courts, and the remainder by the district courts.

The unit of observation

It is important to note that the unit of observation varies across the system. A crime is an event, which can be perpetrated by one or more individuals. Each contact crime (crime against the person) has one or more victims. SAPS crime statistics represent the number of charges or counts and not the number of registered case dockets. A case docket can contain a single count of a particular offence, multiple counts of an offence or even several different offences. The offences may involve one victim or complainant or multiple victims. If multiple offences are committed during a single crime incident, each offence will be recorded in addition to the primary offence. Dockets determine court cases, which may have one or more charges against one or more accused. The accused can be acquitted, or one or more defendants found guilty on one or more charges. Guilty persons are subject to a range of possible sentences, including incarceration.

The estimates of interest

There are a few cohort studies of crime in South Africa[2], but not sufficient to paint a picture of the criminal justice system as a whole. So period measures will be used in this study. To the extent that the system is stable[3] (which it roughly is in some respects but not in others), period measures will approximate cohort measures.

Main limitations of this study

The main limitations of the study arise from the data. They are:

The lack of precision in the Victims of Crime Surveys. These are sample surveys, so the estimates from them are not precise[4]. The four most precise estimates are for housebreaking/burglary, home robbery, assault and theft of motor vehicles, and the analysis of crime reporting here will be confined to these four crimes.

The variability of reporting of crime detection and prosecution in the SAPS and NPA annual reports. Were information in all reports to cover information supplied in any one of them, the picture would be more complete. As it is, for some measures one has to rely on reporting for a single year, or two years, out of five.

The lack of sentencing information entails a major break between trial outcomes and additions to, and subtractions from, the stock of persons under the jurisdiction of Correctional Services.

The absence of a coherent overall framework, the varying units of observation and the fact that matters may stretch from one year to others makes reconciliation within the system imprecise.

[1] Throughout the brief series, the NPA refers to the entire prosecutorial system, from the National Director of Public Prosecutions to the prosecutors in district courts. At each level, prosecutions are divided into those which are handled solely at that level, and those where decisions about prosecution are taken at a higher level.

[3] A stable system is one which has constant transition probabilities

[4] Precision is measured by the standard error of the estimates.

Oh, Sugar! How I finally kicked my sweet fix