Clyde and I have been friends most of our adult lives.

Our formative years were, as was usual in those distant times nearly half a century ago, lived worlds apart given the spatial planning realities of our nation back in the day. He in the ‘Coloured’ suburb of Eersterust and I in a nearby ‘White’ suburb populated by families of the functionaries and middle management of the state.

We met during a period where we both worked as stringers for the capital's English language daily newspaper. Clyde's 'hood was adjacent to Mamelodi and he could safely get me in and out of the township to do photographs and stories using his network during emergencies 1 and 2 in the 1980s.

After a while Clyde became more interested in environmental science and managed, with lots of saving and a bit of the passing of the hat among our circle of friends and colleagues, to enrol in Wits as the new era of euphoria enveloped our nation. He did very well and landed up in a specialization which few of our countrymen have managed to master.

He is so good at what he does in fact, that he is one of only a handful of Africans to be internationally accredited in his field.

Clyde’s business eventually came to employ seven staff members. One was his son whom he sent off to University to get the requisite degree to be enable him, in due course, to take over the family business.

Being one of a handful of specialists in his field, a good deal of his turnover was generated from state entities. This in turn necessitated registering the company on the state's central supplier database (CSD).

While the business was constrained by the extremely specialised and narrow market, it nevertheless ticked along well enough to enable his staff members to educate their children and buy decent homes.

Clyde was injured in a botched hijacking a few years ago and has since needed a prosthetic leg to walk. He joked at the time that this was not all bad as his CSD registration could now list him as disabled as well as a ‘historically disadvantaged individual’.

“Nog punte vir 'n groen kolletjie!” he liked to joke in reference to the system of circles which the government's central supplier database used to give an at-a-glance indication of a company's BBBEEE status to buyers in the state and SOE supply chain.

When Clyde first set up his company, there were, he explained, three circles shown on a supplier's graphic summary page. If you had green or orange ones that was considered a good thing.

Now Clyde's CSD circles had been, initially, three solid green orbs. This meant his company was a level 1 BBBEEE company which gave him access to the "chain of preferential procurement."

Later - circa 2015 - one of the circles was changed to orange. This was was due to a revision in the ownership criteria of the BBBEEE legislation that deemed any company that was not more than 51% owned by black Africans as only a level 2 entity. However, at the time he was not too perturbed as, in the words of the then current classification system he was still a historically disadvantaged individual and the circle was, at least, not red.

In the earlier part of this year my pal had been looking increasingly stressed and despondent. However, eight weeks ago we chatted around the shisa nyama at a get together at his place. He told me the little gathering was to say cheerio as he was shutting up the business and he and the family were on their way overseas.

This news came as a bolt out of the blue to me as we had always joked that we would be playing chess together in the oue tehuis.

When I asked him what factors, aside from the general malaise, had prompted his decision he said he would show me. He then stumped to his study and he returned with a few sheets of paper. “Kyk na die kak!” he said as he waved them about. “This is why we have had no requests for quotes in the past months.”

The printout was a report on his current CSD registration.  There were six bright red dots in the graphic summary.

“How can anyone try and make an honest living in a country like this?” he asked.

“I found an authority overseas that are desperately in need of people like me to run their quality control operation. Visas are sorted, house is sold en ons waai!”

The red circles and the accompanying legend tell a fascinating - yet stark - tale.

Notwithstanding the fact that small and emerging micro enterprises with turnovers below R10m per annum are supposed to be exempt from the requirements of BBBEEE legislation (officially called EMEs - Exempt Micro Enterprises) and Clyde's firm had initially been a level 1 supplier due to the initial, magical ownership classification system, he later found himself at level 2 and, after 2017, he was suddenly relegated to being a level 4 supplier.

Clyde explained that in his calls to the various supply chain officials with whom he had decades of business relationship experience, he had been told - “off the record” - that “orders' had allegedly come from on high about how the graphics were to be used.

Apparently, no requests for quotes or tenders were to even be sent to anyone with a red dot unless there was no other supplier with green or orange dots who could render the service.

“And, are there such suppliers for your services?” I asked.

“No legitimate ones that I know of for what we did. Some guy called us a few months ago and asked if we would do the work we normally undertake as a contractor to his company as he had an order from a local authority. So I called the relevant buyer to check things out. Turns out this dude quoted three times our usual rate just to be in a position to farm it all out. No way he knows where to start. He has no field equipment or lab testing machines maar he has six lekker green dots.”

“We were stuffed around back in the day and now we are sommer “Others” again. Nee wat! At least we are both in the same strond now. Hoezit my other?” he laughed as he speared the steak on the griddle.

A picture, it is said, speaks a 1000 words so I shall leave the picture and the annotations of Clyde's CSD summary here.  See where you would be classified. 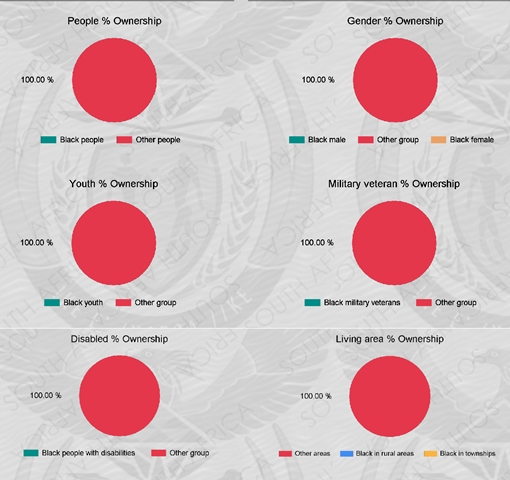 Tate Tito, if this sort of pre-selection process is, indeed, taking place on a wide scale, I fear your laudable plan of generating growth in our economy does not stand a snowball’s hope in hell.

Who is Simon Roche?

PANDA ‘hit-piece’ article is a ‘disgrace to journalism’, says Vegter

SLR: SA must get out of its own way and deal with John Hlophe now