Hidden deep inside the bowls of the Democratic Alliance machine is a memory hole. It is guarded by the party’s contemporary gatekeepers of political correctness and, on a regular basis, into it are poured previous positions and ideas deemed unpalatable today. Out of it emerges some sanitized version of history, washed clean of anything potentially controversial, to be presented to the world as evidence of the DA’s deference before orthodoxy. If not orthodoxy, then before the ANC itself.

The most recent bit of party history to be tipped into the memory hole was Winnie Madikizela-Mandela. Out of it emerged the statement released by DA leader Mmusi Maimane following her death. Without a single reservation, criticism or moral qualm, it venerated Madikizela-Mandela as “a great South African”, who “stands as a bright light”, “stood for principle” and who, “will always be remembered for your selfless and steadfast commitment to our democracy.”

That last line is the most interesting, so far as the DA is concerned. So close was the DA now to Madikizela-Mandela, that it could talk directly to her, beyond even death itself.

But there are many in the DA and, more particularly, in the DP before it, who will not remember Madikizela-Mandela in this sanitized fashion. Or, at least, who would feel that an obligation to the truth necessitates that appropriate lines of condolence and praise would need to be balanced with some important qualifications. For the current DA, however, the party’s institutional memory has been buried deep within the memory hole. That is its job. It now “remembers” a new history. The history as described in a statement written five minutes ago.

Winnie Madikizela-Mandela was a complex person. There exists a raft of contradictory adjectives that accurately describe her – brave, violent, selfless, selfish, loyal, criminal, revolutionary, hero, many more besides – each one of which you could flesh out with much evidence in support. She was, like most people, many things, not all of them good. And one can easily acknowledge both the good and the bad in a perfectly respectful and humane fashion. This needn’t be some exercise in denigration or moral condemnation.

Simply put, it would be the truth. And the truth counts for something. At least, you would think it would for the DA - because many of its forebears, bravely and for the sake of the truth, stood up in the past, in the face of the ANC’s hegemonic omnipotence, to say some very difficult things about Madikizela-Mandela, at a time when few else would. And they did that because they believed the truth mattered. Today, the DA degrades not just the truth but the contribution of those who went before it, all in the name of what is easy and polite.

There are memory holes and there are memory holes in South Africa. Outside of the DA, the same kind of forces are constantly at work, on a far grander scale. The EFF, for one, wasted no time in literally elevating Madikizela-Mandela to god-like status. She was, EFF national spokesperson Mbuyiseni Ndlozi said, the “perfect image of the divine”. One can approach history in that way, if you so choose. Certainly, it’s the natural terminus for the DA’s inclination towards an appropriately sterilised past. It is also, however, a sure path to ignorance. The truth is generally a more helpful and productive tool, both for understanding and appreciation.

In his autobiography, which it would seem few in the DA today have read, former leader Tony Leon has a whole chapter dedicated to Winnie Mandela. He pays homage to Madikizela-Mandela as a brave struggle icon (“a profile in courage”) before turning to those darker aspects of her personality. In this regard, he goes into great detail, not merely about the particulars of 14-year old ‘Stompie’ Seipei’s death but the machinations and subsequent allegations that defined her prosecution. It is a devastating chapter, possibly the most powerful in the book.

“Here in gory and meticulous detail”, he wrote of British journalist John Carlin’s seminal piece ‘Terrorised By Winnie’s Boys’, “was the unmasking of Winnie Mandela as a sort of Madam Defarge on steroids, with a Sartre-Fanon-like penchant for gratuitous violence and terror”.

At the height of it all, he documents too how he and the DP stood up, before parliament, in 1994, to fight for justice for the families of the victims of the Mandela United Football Club, including Lolo Sono among many others. He was so heckled and interrupted he could not finish, as the ANC, incensed and enraged, turned on him viciously. But Leon and the DP stood up then for what they believed fair and just: that all were equal before the law, that Winnie Madikizela-Mandela had been found wanting and that there was a price to be paid.

That is but a brief summary, all through the late 1990s, right up until the 1999 election, Madikizela-Mandela featured prominently in the DA’s campaigning. First, it fought for her to appear before the Truth and Reconciliation Commission (In November 1997 it also tabled a motion before parliament for her to be prosecuted “Prosecute Winnie: DP”). In November 1998, it called for the Attorney-General to act, after Madikizela-Mandela had been found culpable by the TRC for 18 counts of gross human rights violations.

Leon said then of new Attorney-General, Bulelani Ngcuka, a former ANC MP, “His point of departure here should be to speed up the investigation of the prosecution of Winnie Madikizela-Mandela, all the details of which have been languishing with the Attorney-General of the Witwatersrand for more than 11 months now”.

Even in the run-up to the 1999 general election, the DP put Madikizela-Mandela front and centre. This print advert, for example, recently posted on Twitter, which shows Madikizela-Mandela in fatigues, flanked by two damning quotes from the TRC final report, is illustrative of the way the DP drove its message that Madikizela-Mandela must face the consequences for her crimes, but was being protected by the state. 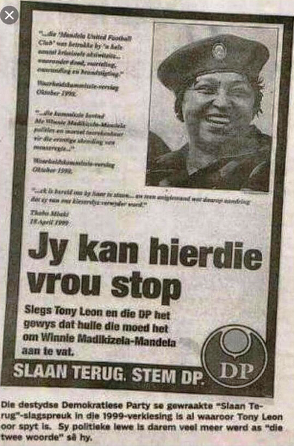 Years of communication, of speeches, statements, correspondence and conflict. All for a cause. All of which was met by furious outrage and much denegation from the ANC, at every turn. But the DP was brave, principled and stood by its message.

Today, all of that is forgotten, as the DA of Mmusi Maimane choses to whitewash the historical record. All of it has been poured down the memory hole. All of it gone.

It is ironic of course. One day, like all of us, Jacob Zuma will die. When he does, you can be sure all those in the DA today – many of whom are young and ignorant but not lacking for arrogance – will not issue a sanitized version of Zuma’s history. The DA of the future will not release a statement without qualification about him. But why not? He too was a struggle hero, who sacrificed much for South Africa, who bravely fought apartheid and helped bring about change. And he too was tainted by serious wrongdoing.

They will not because that is the history they remember now, and because it is inconvenient. What they will remember is how they bravely fought Zuma inside and outside parliament, just like the DP did Madikizela-Mandela, how they bravely stood up for the truth and justice in the face of the ANC behemoth. Because that is their history and they are special. Their history matters. So, Zuma was compromised but Madikizela-Mandela was not. Down the memory hole she goes.

It is remarkable the extent to which the DA is willing to spit on its own history in this way and to erase from the public record, by omission, the contribution of those who went before them and what they stood for. Also, how flexible the truth has become in the party’s hands, how willing it is, for the sake of no more than expediency to pretend Madikizela-Mandela the perfect person. The DA might paint itself as brave. It is not. It is weak, expedient and self-serving. And it is ashamed. Ashamed of itself. That is the saddest part of it all.

Its Madikizela-Mandela statement was a disgrace, nothing more than racial populism. Ignorance now has the party fully in its grip, and it is proudly paraded around on social media as if it is some virtue. The party has made extraordinary use of the memory hole of late. But you can’t turn that kind of device off, and inevitably it sucks in far more than you think. As things stand, it is busy draining the party of bravery and principle, and like a victim of Alzheimer’s, the DA doesn’t even know what it has forgotten.

Gareth van Onselen is the Head of Politics and Governance at the South African Institute of Race Relations.

Winnie Mandela, these murders and me - Jerry Richardson