Eye Witness News has corrected and apologised for a misleading report on DA leader Mmusi Maimane’s comments during Freedom Day celebrations, published (and aired) on 27 April 2018. In the article, originally headlined, “Maimane: People call me mini-Mandela”, journalist Clement Manyathela quoted the DA leader as saying "People phone me. They are on Twitter, they are on Facebook. They say Mmusi Maimane, you are a mini-Mandela." Over the following several days Maimane was subjected to widespread ridicule in the press and on social media for comparing himself vaingloriously, it was assumed, to the late ANC leader. The Sunday Times awarded Maimane its Mampara of the Week award for blowing his own horn and “comparing himself to the father of the nation, Nelson Mandela”.

Yet as Maimane’s Chief of Staff, Geordin Hill-Lewis, pointed out in an article first published on Politicsweb Maimane had been making a very different point to the one reported. He had remarked that people “have even started calling him a “mini Mandela sell out” on social media as an insult. His point was clearly not one of boastful self-aggrandisement, but of dismay at how easily people are prepared to tarnish the name of someone as honourable as Mandela, to the point that his name is being used as a derogatory epithet.” The evidence for this was provided by the SABC news report of a short clip of Maimane’s remarks which showed him saying: “People phone me. They are on Twitter. They are on Facebook. They say ‘Mmusi Maimane you are a mini-Mandela! You are a sell-out of our people!’”

EWN subsequently came under pressure from journalists and commentators, who felt they had been misled, to explain its initial reporting on the story. On Thursday the publication published an apology above its amended article:

We unreservedly apologise to Mmusi Maimane, our listeners and readers for not reporting on Mr Maimane’s comments with the necessary context and accuracy.

While we acknowledge that this story lacked the necessary context, we reject insinuations that the story contained any fabrications. We did not put words in Mr Maimane’s mouth, rather we erred by leaving words out.

Having interrogated the facts of the matter it is clear to us that our reporting lacked the necessary context and, as such, was left open to interpretation, creating the impression that those who were calling Maimane a “mini-Mandela” were doing so for positive reasons and not for believing he was a “sell-out”.

It is important to note that while the article clearly lacked the necessary context, no information was fabricated and any suggestion that this was the case is patently wrong.

In writing and producing his story the journalist cut the last sentence from his soundbyte as he was concerned about time length pressures.”

Both News24 and the Sunday Times have now corrected and apologised for their reporting and comment on this issue. Below its now corrected report News24 stated: "News24’s initial report implied that DA Leader Mmusi Maimane had referred to himself as a "mini-Mandela", and did not provide the necessary context for his comments. News24 apologises for any misrepresentation." The Sunday Times' Hogarth columnist has apologised for making Maimane Mampara of the Week on the basis of EWN's misleading reporting. 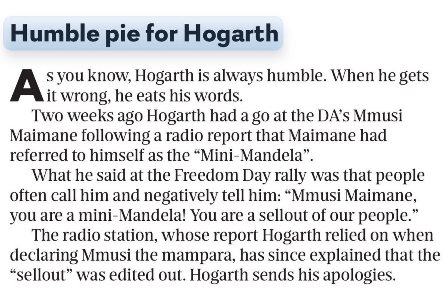 The Daily Insider: Mauritius is aggressively fishing our waters for immigrants