Our rich diversity is part of what makes this country so fascinating and beautiful. We should embrace it. Acknowledging diversity doesn’t make you a racist. On the contrary, it is the first step to embracing it. Apartheid will only be truly defeated when only one race remains: the human race.

To find each other, we must be willing to ask difficult questions and have frank conversations. That’s why the DA does not shy away from robust, open debate. You can only draw people near when you reach out. It is worth the effort a millions times over, because we are all better together.

Our key political opponents thrive on racial division. Their objective in doing so is to win votes, not to build a prosperous, successful, peaceful country. For the ANC and EFF, racial propaganda is a powerful mechanism to “divide and conquer”. For the ANC, it is their last remaining way to shore up their waning support, which is ebbing away on a tide of corruption and poor governance.

This is electoral populism. It has nothing to do with bringing people together or helping to solve their problems. Ahead of the 2014 national election, Cyril Ramaphosa urged disgruntled Limpopo residents to vote, saying: "If you don't vote the Boers will come back to control us”. In 2016, Julius Malema said: “We are not calling for the slaughtering of white people, at least for now.” Last year, he said: “Indian people are worse than Afrikaners. This is not an anti-Indian statement, it’s the truth.”

Playing the race card is also a convenient to way to escape accountability. There is a growing culture of false victimhood in South Africa. In a multiracial context, anyone accused of corruption or poor governance can always claim racism. This immediately diverts attention from real transgressions and makes the subject untouchable and the victim unassailable.

If we want to build a successful, peaceful society, then we need to accept that there must be one set of rules for everyone. Our Constitution and laws must apply to everyone equally, no matter their race. Apartheid was based on different rules for different people and it failed dismally.

In Cape Town, the DA sought accountability. The city commissioned a report with independent legal firm Bowman Gilfillan, which made adverse findings against some councilors.

For five Cape Town councilors, the DA wasn’t a racist party last month. But now that a credible forensic investigation by credible legal firm has allegedly implicated them in tender irregularities, the DA is suddenly a racist party.

These five councilors have resigned, claiming racial victimhood. Can it be coincidence that they have suddenly decided the DA is racist now that they stand accused of maladministration?

In positioning themselves as racial victims, they seek to discredit the forensic investigation, the legal firm that undertook it, and the political party that has sought accountability, the DA. This tactic is destructive for two reasons. Firstly, it undermines the fight for accountability. Secondly, it undermines the fight against real racism – the classic case of crying wolf.

The real VBS issue is that politically connected individuals stole R2 billion from poor people through banking fraud. The manufactured issue to deflect from this real issue is that “black people can’t run a bank”. In this case, the author of the VBS report, Terry Motau, is black, so he and his report can’t be discredited on the basis of being racist.

The moral and economic imperative to transform South Africa’s banking sector is undermined when people use race as an excuse for looting. Corruption is a cancer destroying our body politic. Accountability is the only cure. We must not allow racial mobilization to undermine our fight for accountability.

In Tshwane, the city manager is using the same tactic to avoid accountability, claiming victimhood and calling an audit report ‘bogus’ because it finds against him. Are we to conclude that an institution cannot be credible if it finds against a particular race?

That is why the DA must succeed. If not, what is now racism between black and white tomorrow will be between ethnic groups.

The media sensation after yesterday’s council meeting was extraordinary. Five out of 154 DA councilors (and out of 2000 DA public reps) resign and suddenly “the DA is imploding”. This is nonsense. But the media has bought into this false narrative.

The DA is the most diverse party in South Africa. It is far easier for mono-racial parties to maintain party unity. The DA seeks to unite people around shared values such as accountability rather than shared race.

Where there is no accountability there is ultimately failure. That is why the ANC will ultimately collapse. As deputy president, Ramaphosa failed to act on state capture, VBS and a catalogue of other corruption. This is not how I run a party. Where there is even a hint of corruption, I will act on it. Regardless of race - to do otherwise is ultimately racist.

The DA is laying the foundations for a strong party within a mature democracy. It is a real challenge to build a nonracial South Africa but we have to fight on. One South Africa for all is the DA’s historic mission. We stand on the shoulders of giants who came before us and fought this worthy fight. We dare not fail.

The five councillors who resigned have sent the following lawyer's letter over the above: 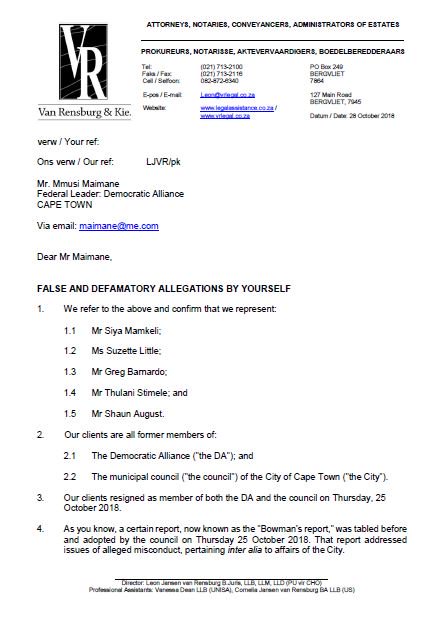 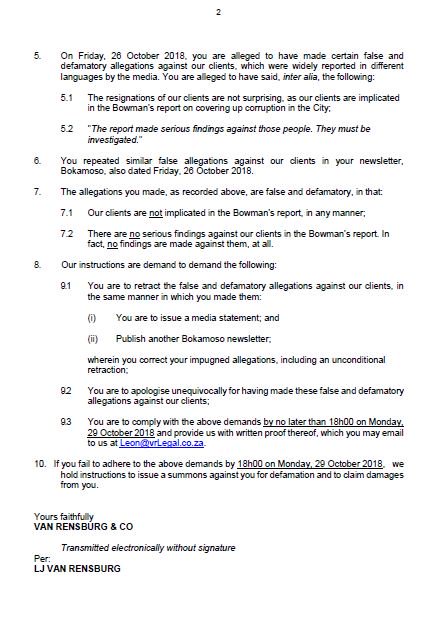 The line from EWC to the fuel price hike