Ever heard of, or listened to, Pictures at an Exhibition, a suite of ten pieces composed for piano by Russian composer Modest Mussorgsky in 1874?

Never mind if you haven’t – it’s not music that I’m overly fond of myself. It’s the title I like. And here are my five slides for an exhibition.

Slide no. 1: Had lunch yesterday with one of my oldest friends – in fact, my oldest friend, we met in grade one (sub-A) in Cape Town in the year we both turned six. He is now a senior counsel.

These days I drive him to whichever restaurant we’re going to; as a child he caught the polio virus – caught it badly – and the resultant “flaccid paralysis” (I believe it’s called) in his legs has grown steadily worse, so much so that, as he says, “better that you, who can operate the brake pedal, drive the vehicle so that we get to where we’re headed”. He is remarkably without any self-pity.

“Lots of us know people,” I said to him, “or of people, who’ve died from Covid, or we’ve seen what people have been through in hospital. Why then,” I asked, “do you think some people think it’s cute to be sarcastic about the amazing efforts made by the world’s scientists and medical people to create vaccines and about the general effort to understand Covid better?”

“It’s always like that, isn’t it?” he replied. “People don’t seem to care much about what they aren’t directly touched by; and they also get ensnared by all sorts of conspiracy theories and the like.” Then he changed the subject.

He was suggesting that my even bothering my pretty little head about such behaviour was, as the lawyers like to say, trite. Maybe, but let me have a small shot.

Slide no. 2: It occurred to me that many people (including me – and maybe even you?) make the mistake of confusing or conflating a country’s government, its so-called elected representatives, with its people in general and even, alas, with the country’s more outstanding citizens.

Thus, we might have forgotten, especially given the political depredations of the last 27 years and longer (yes), that Seffricans have always punched above their weight. Think about it: in the fields of law, business, even statecraft and literature, and particularly in medicine and related fields, we are known across the world for being hard-working, well-trained, and innovative [i].

Flowing from this, a week or so ago, Professor Tulio de Oliveira, director of the KwaZulu-Natal Research Innovation and Sequencing Platform (KRISP) at the University of KwaZulu-Natal, identified a new strain of the virus that causes COVID-19, known as B.1.1.529 and labelled by the World Health Organization the “Omicron variant”.

Now De Oliveira was not born here and might even have an unusual hairstyle, but he has clearly flourished in this environment – an environment in which there are major world experts on virology, epidemiology, etc., such as Salim Abdool Karim, Barry Schoub, Shabir Ahmed Madhi, Alex Sigal, and quite a few others too.

Ironically (if that’s the word I want), local expertise stems in large measure from all the huge efforts put in by Seffricans over the years into virus sequencing related to HIV.

If you access the Q&A with De Oliveira that appeared a couple of days ago in The New Yorker you will note that he is “the principal investigator and leader of the Network for Genomic Surveillance in South Africa, which involves seven genomic facilities distributed across the country” and that, when he identified the Omicron variant, he “wrote to the World Health Organization, because I am a part of the virus-evolution working group,” and furthermore that SA’s ministers of health and science and innovation, with whom he conferred, rapidly asked him to talk to President Cyril Ramaphosa.

In short, De Oliveira did what he was supposed to do in terms of his job; this is not (yet) the People's Republic of China.

What was eating at De Oliveira was that, while so-called herd immunity from previous infections and from vaccinations might protect people at the moment, what about the new variant? Could a scientist, any decent scientist, simply keep quiet and let the variant circulate and infect people?

Attention had to be drawn to the variant quickly, until the crucial questions related to it have been answered. These are: Does the variant spread more quickly, is it more infectious? Do people who get infected with the variant, despite having been previously infected or vaccinated, stand to develop serious disease? How effective are present vaccines against the variant?

Slide no. 3: The variant does seem to spread like proverbial wildfire. As of yesterday, the national positivity rate was at 16,5%, up from 10,7% the day before, and mainly in Gauteng.

But, if previous experience was anything to go by, SA was also due for a fourth wave right about now – and it’s also clear to anyone with eyes that there’re a plethora of super spreader events taking place right now and, what’s more, that people have grown blasé during the last few weeks of indolent infection rates.

Why the National Coronavirus Command Council continues to allow gatherings of people – up to 750 indoors – I fail to understand. And last night I went to pick up a takeaway from a well-known local restaurant – the clientele of which is on average aged over 50 – and was amazed to see a super-spreader event in progress. The downside of vaccinations, of course: people start thinking they’re untouchable.

Still, there is some good news. When it comes to the Omicron, local clinicians are reporting greater infectiousness but less virulence. This is, of course, “anecdotal” information – but right now “anecdotal” is all there is.

Whether the available vaccines remain as efficacious, we don’t know yet. But we will get some indication within the next, say, 10 days.

Slide no. 4: Talking of which, why do people talk endless codswallop about vaccinations? [ii] Nobody ever claimed that getting jabbed fixed everything, from your dandruff to the size of your bank balance, nor that incoculations would rid the world of Covid.

Nor, by the way, do you wake up the next morning looking like E.T. the Extra-Terrestrial or with a Bill Gates chip in your head – and, by the way, as someone said, if Bill wants to go jorling with me, he’s welcome.

Until and if we hear different regarding Omicron – which I of course hope to hell we won’t – what vaccinations do is help prevent infection but, above all, reduce the number of people going into ICUs and the number of people dying from the virus. Vaccinations are not mainly about reducing your chances of getting Covid; they’re about stopping you from dying.

In the endnotes below [iii] are Discovery’s data on the efficacy of vaccination against Covid-19. It’s not rocket science.

Slide no. 5: What about the argument regarding mandatory vaccination?

Personally, I have no difficulty with the proposition that in terms of the pandemic, my safety and that of those I love depends on the largest number of people possible being inoculated.

But I do have a difficulty with the proposition that people should be coerced by the state into being inoculated. In my view, each individual has the right to make a choice of his/her/their own …

We also need to bear in mind that, according to research by Discovery, once a person has recovered from COVID-19, his/her odds of a future COVID-19 hospital admission are reduced by 85%, compared to unvaccinated people who have not had a prior COVID-19 infection. Where, in terms of a mandatory Covid vaccination policy, would such people fall? Would they also be forced to have a vaccination?

In any case, I think that if legislation of some sort were promulgated, it’d be struck down as irrational – inimical to the constitution and democracy and all those values we say we believe in. By the same token, though, those who say they won’t be vaccinated must live with the consequences …

But, it would be argued by those in favour of mandatory vaccination, what if the anti-vaxxers put your life in jeopardy by shopping in your favourite supermarket? Well, then I must decide about where I shop.

Besides, “right of admission reserved” gives the proprietor the right to decide on whom should be allowed into his/her establishment. Anyway, I think there are other ways to combat the anti-vaxxing stasis in this country – carrots rather than sticks.

And no one said liberalism was easy.

[i] In this connection, had we but world enough and time, I might even consider writing an article on the benefits of colonialism – but let’s leave that for another time.

[ii] By the way, while researching polio, I found the following on Wikipedia: “In 2003 in northern Nigeria – a country which at that time was considered provisionally polio free – a fatwa was issued declaring that the polio vaccine was designed to render children sterile. Subsequently, polio reappeared in Nigeria and spread from there to several other countries. In 2013, nine health workers administering polio vaccine were targeted and killed by gunmen on motorcycles in Kano …”

[iii] Discovery data on the efficacy of vaccination against Covid-19. 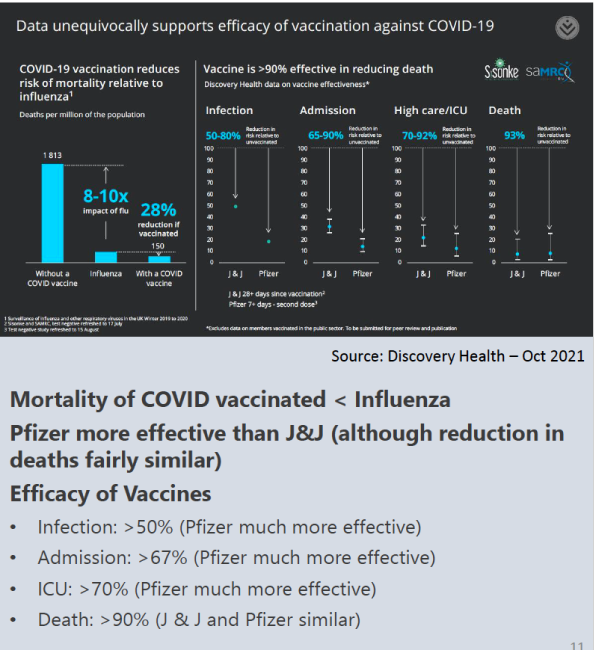 Three metros do not a summer make

Why do I have to listen to this?

JSE market review: China will provide tailwind for the JSE in 2022