Funding govt and SOEs (I)

Funding government and State-Owned Enterprises (I)

The series deals with the following topics:

Funds regulated by the Registrar of Pension Funds.

This introductory brief considers aggregate assets in funds discussed in this series of briefs, the effects of prescribed assets in SA in the past, the potential cost to investors from prescribed assets going forward and rates of return on the different asset classes and their trends.

The most recent complete account of financial assets discussed in this brief series represents the position as at 31 December 2017.

What is at stake now is the re-introduction of prescribed assets as a means of channelling funds towards government and state owned enterprises. Prescribed assets are the percentage of retirement funds’ assets (and possibly of other institutional investors) that, by law, have to be allocated to certain government-approved instruments.

THE EFFECTS OF PRESCRIBED ASSETS IN SA IN THE PAST

At its height, the prescribed asset level was set at 75% for public investment commissioners and 33% for long-term insurers. The consequences for the savings industry varied over the decades, but ultimately it resulted in eroding investor wealth.

With regards to the effect the policy had on asset allocation, around 40% of pension fund assets were in prescribed assets in the mid-to-late 1980s.

Since 2004, the average return for equities represented by the JSE All Share Index has been 18% per annum, whereas the All Bond Index returned 9% per annum.[4]

To illustrate the diminished returns that could occur over 10 years as a result of prescribed assets, the HSF has created a capital levy spreadsheet/Excel model. This model consists of a portfolio of equities and government bonds, and calculates the resulting capital levy (the net present value of the diminished return, i.e the cost of complying with prescribed assets obligations) as a percentage of total investments. Using mid-market inputs in the left-hand-side table below, we get 10 year capital levies as per the three different percentages of prescribed assets shown on the right:

Rates of return on the different asset classes and their trends

Overall the rates of return for all assets classes have trended downwards in the last fifteen years, with domestic equities and domestic property in particular feeling the pinch.

Annual percentage return per asset class from October 2005 to October 2019: 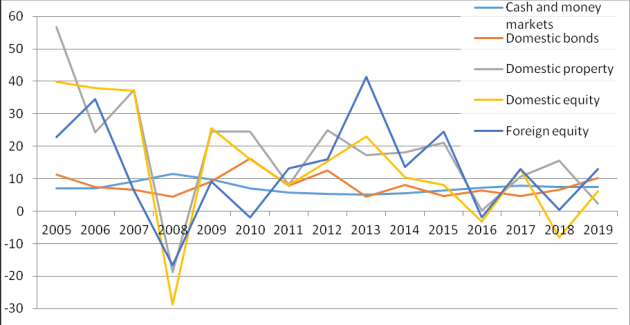 Percentage returns over the last 5, 10 and 15 years have been:

The investment limitations that currently exist for pension fund managers, which will be covered in the following briefs are, the HSF suggests, in the best interest of beneficiaries in that they avoid the risk of over-concentration of any single asset class. But prescribing assets has in the past proven to be detrimental to fund performance, and going forward it is likely to detract from portfolio returns.

The trend in all asset returns has been downwards for some time now and especially so for local assets. And while extrapolating past returns is generally a poor indicator for future returns, the general consensus among market participants world-wide now is that economic growth levels globally are likely to be on the downside for the immediate future. Major markets which have been driving growth in recent history, namely China and India, are cooling off, coupled with the damage caused by the ongoing uncertainty about trade regimes, Brexit and geopolitical tensions in the Middle East. Locally, the challenges to the economy are well known to the average South African. Adding further downward pressure by re-introducing prescribed assets will only exacerbate the difficulties fund managers currently face in generating sufficient returns to secure beneficiary payments in defined benefit funds and adequate income replacement from defined contribution funds.

The National Credit Amendment Act – and what can be done