Print is a dying industry.

Sadly, much of the English print media across the globe (and particularly in SA) are hastening their demise by adopting an approach to journalism completely at odds with what informed readers expect from newspapers.

It may take a bit more time, but sooner rather than later many titles will have first-hand experience of the adage: “Go Woke, Go Broke”.

Wokeness is a way of interpreting the world, and reporting on it, that rejects everything that was once taught in journalism school.

The purpose of this article is to analyse Woke journalism with reference to the English print media’s reporting of a recent “sex scandal” that became front-page news for days.

But before I get to the sex part, let me first provide some essential background on Woke Journalism.

Once upon a time (long ago) cadet journalists were taught that their job was to serve their readers, who buy newspapers because they wish to be informed about events and developments that matter in the world.

Because newspaper readers cannot personally be everywhere that something interesting or important happens, they rely on journalists to go for them, and convey reliable and accurate reports of what is going on.

Senior journalists with a track record of getting the facts right, are afforded the honour of writing “opinion pieces” -- but clearly separated from the “news”.

On the first day of cadet school at South African Associated Newspapers, I was taught that there is something called “Truth” but it is very hard to find. One can only get closer to “reality” by searching for evidence. When the evidence challenges your assumptions, you change your assumptions. You never ignore the evidence. You test it.

What’s more, people you interview are entitled to be quoted accurately and in context. They have a right to recognise what they said when they read your article.

In order to imbue us with some understanding of the complexity of reality, we had to spend our first full year of reporting in the magistrates’ courts. The purpose of this immersion was to teach us that there are many ways to interpret a complex situation, and that it is very difficult to get to the “truth”.

Today, many young reporters enter the world of journalism after a three-year immersion in the Marxist marinade of a University’s Humanities Faculty. No-one can teach them anything about the complexity of reality because they know The Truth. They are “Woke”.

This is a word drawn from African-American slang to describe people who are politically “awake”. Wokeness has its origins in the United States whence it unleashed itself with seismic force across Universities throughout the English speaking world.

All Marxist theory divides the world into two main categories: Victims and Villains. The incessant struggle between good and evil, thus defined, is the motor of history.

However, according to Critical Race Theory (CRT), this divide is no longer along class lines, (as classical Marxists claim).

It is a biological divide, with the fault-lines being race, sex, sexuality and disability. Where these fault lines cross, is the point where people are most victimised. Hence the term “intersectionality” which features so strongly in the Woke lexicon.

According to the Lore of Woke, the Villains are white heterosexual able-bodied men. The Victims are everyone else, in escalating degrees of victimhood.

Another crucial point to understand is that, like all Marxist theory, CRT valorises victimhood. Victims are inherently good -- and the more “victimhoods” a person can claim, the nobler they are. The heterosexual able bodied man is the epitome of historical evil, perpetuated in the present.

A Woke understanding of history is merely a litany of atrocities committed by white heterosexual males, pivoting on colonialism and slavery.

It is for this reason, that today, “Whiteness” still represents Prime-Evil. The sins of the fathers are visited upon the children until the fifth generation, according to this secular dogma.

If they want to escape damnation, and prove they are decent human beings, whites must unquestioningly buy into the critical race theory, and never utter a different opinion.

For South African whites it means accepting the myth that South Africa’s problems began in 1652, when the first white people established a settlement on the southern tip of Africa. According to American Wokeness, the date is 1619, when the first slaves landed.

The upshot was seen this week in the actions of the Woke Jack Markovitz, who achieved his 15 minutes of fame in the “battle of Brackenfell”. He is a white trust-fund kid from a wealthy family who declared Mandela a sell-out and sneered at working-class whites. He is, however, absolved of his generational sins, by donning a red beret. He does not even have to offer up his family’s extensive property portfolio to the poor to prove his sincerity. He just has to mouth the Words of Woke to be valorised.

On the other hand, any black DA member is doomed through association with “whiteness”. It is through these contortions and contradictions that we get to the core of Woke ideology: Non-racialism is Racist.

Applied to the DA, the “logic” is very clear: because most white South Africans support the DA, it must (by definition) be evil. The fact that most of the DA’s voters are not white, does nothing to ameliorate this. Even when the DA had a black leader, and 8 out of 9 black provincial leaders, and a majority of black members and voters, we were still a white party, irredeemably infused with “whiteness”.

Every black person that associated with “whiteness” became a puppet, by Woke definition. Therefore, the only good black DA member is one who is fighting with white members.

But true redemption for a black DA member only comes when s/he undergoes a Damascene conversion and leaves the party. Branding one’s former close associates “racist” (for their sin of Whiteness) is a short-cut to the pinnacle of virtue, in the eyes of Woke Journalism.

Now, let’s get to the sex, that I promised at the start.

You may recall that a woman called Nkele Molapo, a former DA member of the Provincial Legislature in Gauteng, made headlines when last month, she accused our newly elected interim Gauteng leader, Solly Msimanga, of sexually harassing her in 2014, when he dropped her at her home after a function.

On Molapo’s own version, as she was about to get out of the car, Solly allegedly put her hand on her leg and said: “I want you”. Solly firmly denies this account saying she has never been in his car and he has never dropped her at her home.

But his version is irrelevant in woke journalism, and was not even worth reporting, because he has fewer points on the victimhood scale, and therefore less virtue.

But even on Nkele’s own version following the “incident,” she got out of the car, and nothing else happened. This was the last time, according to her, that there was any “advance” from Solly’s side.

However, from her side, a lot happened. She posted things on social media which could only have been interpreted as a “come-on” to Solly. Had they been addressed by a man to a woman, they would have immediately been interpreted and condemned as sexual harassment.

In her posts, she called him “Eye Candy”, her “Monday Crush”; she labelled him “King Solly”. She wrote messages dripping in sexual innuendo. She invited him to make the main speech at her birthday party where she stood next to him in all her finery. All these posts are available to journalists on social media. 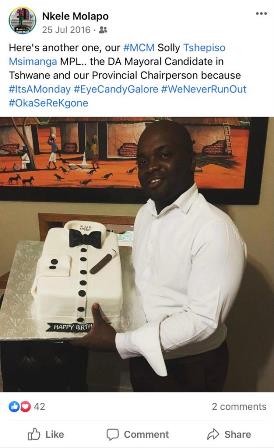 Suddenly, though, six years later after the alleged “incident”, she suddenly feared being in the same venue as Solly, and was seeking protection from the ANC Speaker of the Gauteng Legislature!

Woke journalism lapped it up.

When journalists called Solly, it was not to hear his version of events. It was to ask him whether he would heed calls to resign over the incident. (He had recently been elected interim Gauteng leader of the DA).

I have not found an article which dares to raise the simple question: What was Nkele’s motive? Only those that pilloried the DA for raising the issue.

It is a question Woke journalism would never ask, because it would mean questioning a “victim”. If facts contradict the dogma, they must be ignored.

Fortunately, the DA asked some of these questions, and the answers were immediately apparent. And therein lies the truth that has so far gone unreported.

The story is this:

In 2017, when Solly was still the Mayor of Tshwane, (in an ill-advised and ill-fated governance agreement with the EFF), the DA was at loggerheads with the City Manager, who had close EFF ties. The DA caucus had a strategy session on how to deal with the problem. The strategy was to culminate in a decision by the Council to relieve the City Manager of his duties.

Except that someone was leaking the strategy, directly out of the DA caucus to the cell phone of Julius Malema, via What’sapp. We established that it was Nkele Molapo, beyond reasonable doubt, when the EFF printed a copy of the screen grabbed message and circulated it to councillors, clearly showing Nkele’s landing page. The group and the time of the post triangulated to find her guilty beyond reasonable doubt. 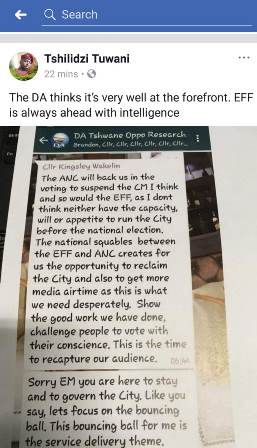 She faced an internal disciplinary charge that took years to resolve in all its painstaking and technical detail. But most of all because Nkele applied Zuma’s Stalingrad tactics, and was further assisted by the Covid lockdown, which added another six months to the process.

But, when she had played her last legal card and knew she had no chance; she would lose her DA membership and therefore her position. That was a ticket to instant accelerated victimhood, and of course she knew it. Never-mind that in any other party she would simply have been fired on the spot for her infringement, and not had the luxury of due process the DA afforded her.

So she dug up a six-year old complaint alleging the trauma that followed a colleague allegedly putting his hand on her knee and saying: I want you.

Those of us who dared to question the timing were immediately pilloried by media for casting aspersions on the “victim”.

That is fine with me. I was well trained as a journalist, and I go where the facts lead. And they have led me to the conclusion that Solly suffered a great injustice, and was publicly seriously defamed. His guilt was pre-determined by his biology.

If we allow this kind of ideological madness to continue, it will undermine the very foundations of constitutionalism, which relies upon the rule of law, and tested evidence to draw conclusions.

CRT has already destroyed journalism. How long before it destroys other institutions such as the Judiciary?

We in the DA have a duty to speak up to prevent the erosion of the very fabric of our democracy. We understand our role and will play it fearlessly.

The DA's by-election setback: An analysis

We must wake up to the EFF threat - Helen Zille