Usually if you search a particular topic on Google the most relevant articles should come up close to the top, particularly if there is a relevant article on the topic with a headline matching the search string.

For instance, in 2017 AfriForum’s Ernst Roets made a presentation to the South African Human Rights Commission under the headline “anti-white racism in South Africa” dealing with this topic, and giving examples of it in practice. It was published on Politicsweb under the same headline here. 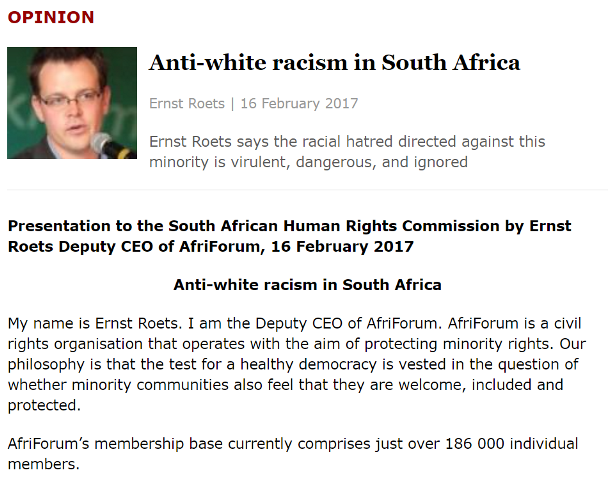 This was a factual document, presented by a leader of one of the most representative civil society organisations of the Afrikaner community, to a Chapter Nine institution. For some reason Google decided that this presentation constituted “dangerous and derogatory” content and seems to have chosen to suppress it, and similar articles, when users around the world conduct search on this or related topics. Below are the top Google search results for anti-white racism in South Africa set against those from Microsoft Bing. 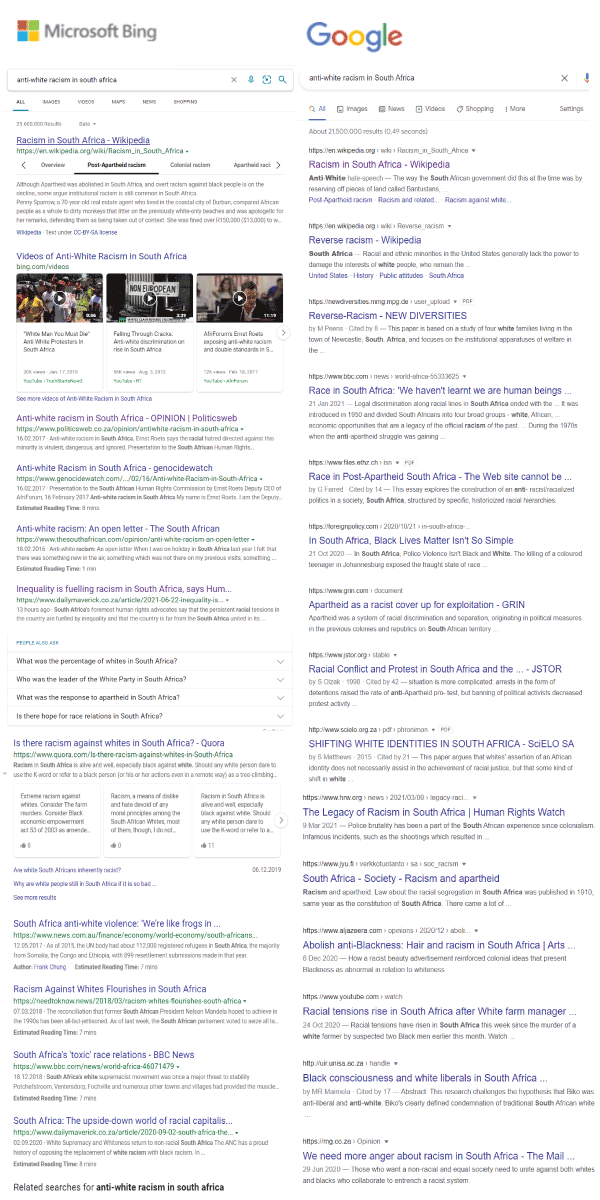 The top article result for both is the Wikipedia entry on “racism in South Africa”. The second and third articles on the Bing search engine are the Ernst Roets’ piece. The following articles are also generally on topic. The second and third results on Google meanwhile are on “reverse racism” a term commonly used by people who are trying to pooh-pooh the notion of anti-minority racism in South Africa, as both articles tend to do.

The articles which follow are almost entirely off topic. It is only when you scroll around thirty articles down that you find articles sneaking into the results which are directly relevant to the topic that the user was trying to search for.

It is unarguable that racial discrimination against white and other racial minorities in South Africa both exists and is pervasive. It has been written into innumerable ANC policies as well as government white papers, laws, charters, Constitutional Court judgments, and regulations. It has also been challenged in numerous court cases. These are all documents in the public domain, and most of them are available online.

The question in South Africa relates to whether one supports or opposes these policies, not whether or not they exist, though one's position may affect the language one uses to describe them. Organisations like AfriForum, the Institute of Race Relations, and others, argue that these policies are morally wrong, and have been economically and institutionally destructive. The view of organisations like the Economic Freedom Fighters and the ANC’s RET faction is that they have not gone nearly fast or far enough.

The ANC government meanwhile is itself in the process of changing the constitution, with EFF help, to allow for the dispossession of white farmers (and others), and it is also tightening up legislation to give the government great powers to enforce race quotas in the private sector limiting the share of jobs held by racial minorities to their proportion of the total population.

There is no taboo against publicly expressing anti-minority animus, and many leading politicians and commentators do so quite freely. In fact, this is one of the quickest and easiest means to build up a following, whether electorally or online.

Leading British and American publications such as the New York Times, the Guardian, the Financial Times, the Washington Post, and others, have long downplayed the racial nationalist ideology and policies of the ANC government in South Africa, and their damaging effects. What is significant about this move by Google is that it appears to be deliberately obstructing efforts by people outside South Africa who are actively trying to educate themselves about this topic.

Compare this with the narrative of so-called “white genocide” in South Africa. The idea that there was a "genocide" (in the meaning of "systematic mass murder") of whites currently ongoing in South Africa under the ANC government was a lunatic (far-right) view in the United States, and even more so in South Africa. It is not a claim made by AfriForum for one.

The people promoting it most strongly were from the Suidlanders, an organisation which had early in its existence been exposed (in Rapport newspaper in 2010) as a SAPS Crime Intelligence front and which had been deeply distrusted for this and other reasons by even (or especially) the most right-wing Afrikaners ever-since.

In 2018 and 2019 this fringe view was, however, the subject of numerous investigative reports in the British and American media. It was a view taken into the mainstream by such publications, greatly magnified, and then loudly debunked. This is a practice known as “nutpicking”: the most obviously unhinged view on an issue, expressed by the craziest and least reputable member of a group, is picked out and presented as representative, and then refuted. The mainstream and substantiated position (such that farm murders and attacks are a serious problem, or minorities in SA are under threat) is then linked back to the nutter one, and casually dismissed on this basis.

If you search white genocide in South Africa on Google you will be presented with numerous such articles. These may be flawed, for the reasons presented above, but they are at least on topic. By contrast the searches for anti-white racism or anti-white discrimination in South Africa – real, widespread, easily verifiable, and so irrefutable, phenomena – and you will come up with very little that is relevant.

As the ANC/EFF move towards the final phase of the National Democratic Revolution there is nothing to see here, other than one of the world’s most powerful media companies disappearing their racial agenda down the memory hole. 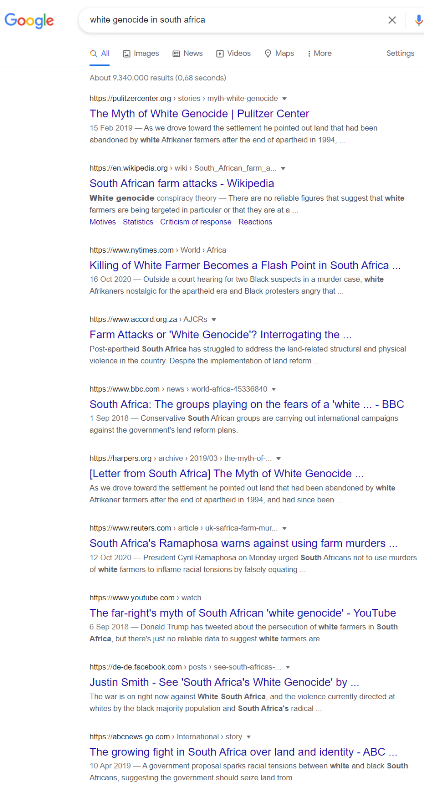 We aren’t calling for the slaughtering of white people, at least for now – Malema

Who is Simon Roche?