How much of SA's land is really in black hands?

Dr Pieter Mulder has courted great controversy with comments that black South Africans have no historical claim to land in the Northern and Western Cape and also that blacks own a greater share of the country's land than the government admits. His comments come against claims that whites owned 87% of South Africa's land and that little progress has been made in changing this picture. However some basic arithmetic reveals that a far greater share of the country is in black hands than is often acknowledged. It is also apparent that ensuring the productivity of the portion remaining in white hands is increasingly important to the Government in maintaining political stability in urban areas. This has implications for the manner in which future land policy is implemented.

Any discussion on land ownership in South Africa risks generating more heat than light. Part of the reason for this is that few people who enter the discussion bother to do any research into current land ownership patterns. Very few of Dr Mulder's critics chose to challenge him on points of fact but resorted to all manner of racial taunts and insults. Let us take another approach and do the arithmetic to see who actually owns how much of South Africa's land.

State owned land would previously have been regarded as part of the white owned 87%. It follows then that it should now be regarded as black owned, which means that at least a quarter of the country's surface area is in black hands. There is nothing preventing the State from handing title to much of that land to black people.

The land redistribution programme, which is a distinct programme from the land restitution programme, had by 2010 handed a further 3.1 million hectares, or 2.5% of the surface area, to black South Africans pushing up the share of black owned land to at least 32.5%. This figure is more than double that of the 13% often cited by government officials.

These calculations have not taken into account land traded in the market between private owners. This is because accurate data on the extent of such trades does not exist. There is significant anecdotal evidence that such trading between former white and new black landowners has taken place. Whether the amounts traded are equivalent to 10% or 15% or 20% of the surface area of the country cannot be known. However any of these figures would push the figure for black land ownership to between 40% and 50% of South Africa's surface area.

If the 49 million hectares of the Western Cape and Northern Cape are subtracted from the total that blacks are entitled to then their share of ownership would rise even further. However it is here that Dr Mulder makes a dangerous political miscalculation. Dr Mulder's history is of course correct that white colonists moving from South to North met black colonists moving from North to South in or around the vicinity of the Little and the Great Fish rivers.

Of course figures about surface areas tell us nothing about the value of the land held by different groups. A hectare in the Cape Winelands may be worth many hundreds of hectares in the Karoo.

Likewise a commercial farm that has benefited from decades of investment in infrastructure will be worth a great deal more than a piece of undeveloped land in the same area with the same soils and the same rainfall.
Hence the numbers that we have calculated are at best a very crude representation of the picture of property ownership in South Africa. They do, however, tell us one important thing and this is that actual patterns of ownership bear little resemblance to the picture presented by many land activists and officials in the government.

It must be expected that many of the proponents of land reform and redistribution would still make the point that having 50% of land in the hands of 10% of the population is unfair and unjust and must be changed. Here they should tread carefully. The bulk of this 50% is in all probability in the hands of commercial farmers. There are only an estimated 30 000 of these farmers left in South Africa down from 60 000 fifteen years ago. This averages out to approximately 1 500 hectares per farming unit in 2010 up from 750 hectares at the time of South Africa's political transition. This figure would of course vary greatly from one region of the country to the next but it is a plausible average figure.

The increase in the average size of a farming unit indicates that farmers have found it necessary to expand their operations considerably in order to benefit from economies of scale that allow them to remain productive. This is especially so considering that they do not benefit from the protectionist measures that apply to their competitors in Western Europe and North America.

At the same time that farming operations were getting bigger and more efficient their markets in urban areas were also expanding. In 2010 62% of South Africans lived in urban areas up from 52% in 1990. However levels of poverty and unemployment in urban areas remain extremely high and poor urban households will find it very difficult to absorb the impact of high levels of food price inflation. In fact it is quite plausible that steep food price increases could trigger a political reaction, in urban areas, that the government would find difficult to contain. This is especially so in an environment that has seen the number of major service delivery protests against the State increase by 1000% over a period of less than a decade. Consider then that it is accepted that eight out of ten land reform projects has failed or is failing and to call for accelerated reform is to court political disaster for the government and the ANC.

People who comment on land reform in South Africa would therefore do well to consider the following points: The first is that the amount of land in black hands is not 13% but may be as high as 50%. The second is that the 50% in white hands is held by South Africa's food producers and that their numbers are shrinking very quickly as urban markets demand ever more cost effective production methods. The third is that any policy that compromises the ability of those farmers to produce food may trigger a series of urban protests that the government may find difficult to control.

Frans Cronje is deputy CEO of the South African Institute of Race Relations. A version of this article first appeared in Rapport on 26 February 2011.

Politicsweb: Land ownership patterns in South Africa as of January 2011: 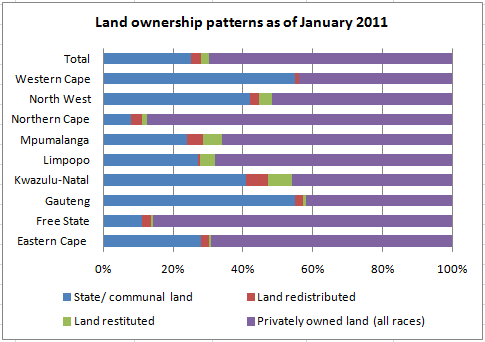 From data provided by govt in answer to the parliamentary questions here and here.