Daily Sun (February 20 2015) - VINCENT WEARS a helmet to protect him from the merciless creature that moers him every night.

He can't say what his attacker looks like because he can't see
it . . .

"It beats me all over my body and it force feeds me with human kak," said 49-year-old Vincent Matoto from Munsieville, Joburg.

"I have been at war with this creature for four years and I am losing the battle."

So desperate is the exhausted and terrified man that he has made a helmet out of an old soccer ball and a beanie in the hope that he can protect his head.

"Just before it starts with me I become very drowsy and I fall into a dead sleep. Then I wake up with scratches, bruises and pain," he said.

Vincent said he has a recurring nightmare.

"In my dream I am running with children to a stream, but as we get to the stream the children stop running and only I get in the water. But then the water turns into kak that chokes me."

The father of four said the creature dislocated his arm, making it impossible for him to carry heavy things and forced him to give up his job.

"I was a plumber but with a broken arm I can't do my job. I had to quit and stay at home," he said.

Vincent said prophets and pastors have failed to save him from his invisible creature horror. He has spent more than R60 000 to try and fight the creature with medical as well as cultural doctors, but nothing has worked.

"The hospitals say they can't find anything wrong with me. They can't explain my wounds. The sangomas recommended that I should twasa to appease the ancestors but that hasn't helped either."

Said Vincent: "All I want is to get rid of this creature so that I can work again and provide for my children. Is that too much to ask?"

Grace Matoto (45), Vincent's wife, said it breaks her heart to see her husband suffer from something she can't even see.

"He goes to bed with all his clothes on," said Grace.

"I can't understand what is happening to him. After the beating he just wakes up confused. I want him to go back to being himself."

"He got the creature either from sleeping with a married woman or breaking a woman's heart," said Dumezweni.

"A woman who drinks mabebeza or uses muthi on her vagina can summon a creature to attack the man.

"The creature is no tokoloshe," said the sangoma. 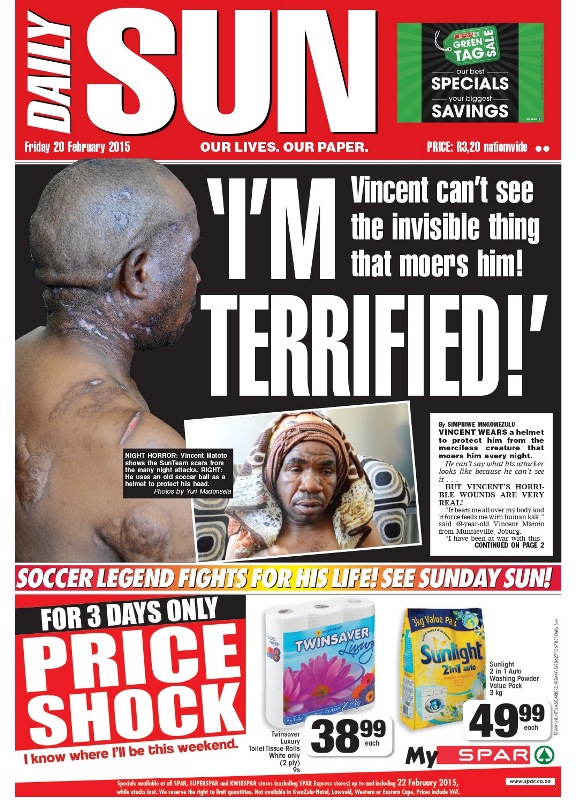