Imtiaz A. Cajee's search for the truth

Jeremy Gordin reviews "The Murder of Ahmed Timol: My Search for Truth"

The Murder of Ahmed Timol: My Search for Truth by Imtiaz A. Cajee. Jacana Media, 2020. Electronic book.

“Where were you when President Kennedy was assassinated?” was a question that achieved (what these days might be called) a meme-like status among my generation and older ones; and there’re doubtless still many around who could answer.

“Where were you when Ahmed Timol died?” is a question that, obviously, not as many people could answer. A plurality of South Africans, especially those aged under 50, might not even know who Timol was and what happened to him.

In 1971, an inquest (the “first” inquest) adjudged that 29-year-old Timol, an underground operative of the SA Communist Party, held by the security branch on the tenth floor of John Vorster Square (now the Johannesburg Central Police Station), committed suicide by jumping to his death. 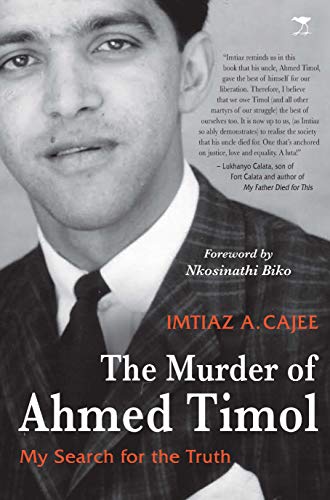 Forty-six years later, in 2017, a new inquest (the second “inquest”) found that Timol was murdered. As a result, in 2018, Joao “Jan” Anastacio Rodrigues, now 81, a former clerk in the security police and the last person to see Timol alive, was charged with murder.

This decision was taken by the NPA, even though Rodrigues testified in 2017, as he had in 1971, that Timol had dived through a window and fallen to his death. Rodrigues has since applied for a permanent stay of prosecution, which was denied, and is now awaiting the outcome of an appeal against this.

Win the battles, then go to war

Locked down and locked in, in Shanghai

Locked down and locked in, in Shanghai

Get up, stand up! It could save your life