In response to Jeremy Gordin’s recent column of 15th April, David P Kramer posted an iconic photograph showing Advocate Isie Maisels being borne aloft by triumphant supporters following the acquittal of Nelson Mandela and thirty other activists at the end of the Treason Trial in March 1961. An acknowledged giant of the Bar, Maisels famously led the defence team to victory over the apartheid regime in that landmark trial.

In his accompanying comment, Kramer pointed out how ironical it was that were certain lobby groups in South Africa today to have their way, Maisels would not be considered for the judiciary because of his association with certain Jewish organisations.

Among other communal leadership positions held, Maisels served as chairman of both the SA Jewish Board of Deputies (SAJBD) and the SA Zionist Federation. Nor does the irony end there. As Kramer notes that Roshan Dadoo, one of the signatories on a letter to the Judicial Service Commission (JSC) demanding that Judge David Unterhalter be rejected as a candidate for the Constitutional Court because of his links to the SAJBD, is herself the daughter of one of the accused in the Treason Trial, Yusuf Dadoo.

During the apartheid era many eminent Jewish lawyers, Maisels included, were never appointed to the bench because of their record of having defended anti-apartheid political activists. It is sobering to reflect were Maisels alive today, his fitness as a judge would again be called into question in certain quarters.

Last week, a concerted attempt was made by a political lobby group calling itself the SA Boycott, Divestment, Sanctions Coalition (BDS) to influence the proceedings of regarding interviews for positions on the Constitutional Court. This claimed that because the SAJBD “supports and minimises the actions of the Israeli apartheid state”, no-one could “honestly proclaim to be a supporter of human rights for South Africans” while still remaining a member of it.

Since the BDS movement is manifestly a political lobby whose explicit purpose is to campaign for the delegitimization and isolation of the State of Israel, its approach to the JSC clearly amounted to a politically-driven attempt to influence the judicial process. For that reason alone the JSC should have dismissed it out of hand. However, it was not only democracy that BDS was undermining, but also South Africa’s bedrock culture of equality and non-racism.

Taken to its logical conclusion, the attempt to stymie Unterhalter’s candidacy amounted to a demand that anyone associated with an organisation that supports Israel not be considered for public office. In practice, this would mean excluding the vast majority of South African Jews, since most of the community’s members are associated with at least one Jewish organisation, be it a synagogue, school or any of the various welfare, security, cultural, social outreach, civil rights and other communal bodies that exist and which, almost without exception, can to some degree or other be considered Zionistic. 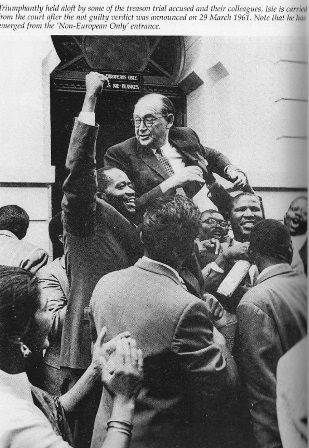 This is not the place to elaborate on why this is so, but suffice it to say that whether expressed in religious, historical, cultural or ethno-national terms, the connection with the Land of Israel has been one of the abiding, bedrock themes of Jewish history throughout the ages. Accordingly, calling for Jews who identify with this pivotal aspect of their heritage to be shunned and boycotted amounts to a gross act of antisemitism, rendered even more repugnant by being couched in the fashionable language of democracy and human rights.

The SAJBD, moreover, while it certainly speaks out on Israel’s behalf when it believes it is being unfairly attacked, does not officially define itself as a Zionist organisation. Rather, its explicit purpose is to serve as the elected, representative spokesbody of SA Jewry mandated to safeguard the welfare and uphold the safety and civil rights of the community.

Particularly in recent decades, the SAJBD has also devoted much of its efforts to social and civil rights activism on behalf of other vulnerable South Africans, including victims of xenophobic violence, those left destitute by the  lockdown and the Chinese community when it was being maligned and boycotted at the start of the Covid crisis.

That the local BDS movement chose to malign the representative body of SA Jewry in this scurrilous way did not come as a surprise. Throughout its existence, the movement has persistently incited hatred and even harm against the mainstream Jewish community and its leadership. Regrettably, in its own letter to the JSC, the Black Lawyers Association(BLA) evidently echoed the sentiments of the BDS grouping when opposing Unterhalter’s candidature. Even more regrettably, as shown by the questions it posed to Unterhalter during his interview the JSC clearly took seriously the allegations it levelled.

Not only was Unterhalter’s previously having sat on the SAJBD national executive continually brought up when it should have been considered irrelevant, but the nature of the questions themselves demonstrated a distinct degree of ideological bias on the part of those conducting the interviews. Whether or not this was a factor in Unterhalter not getting the position he was applying for in the end remains a matter of conjecture, but the very fact that it happened at all amounts to a disturbing infringement both of judicial independence and the Jewish community’s fundamental right to dignity and equality.

Obsessed by an all-consuming hatred not only for Israel but anyone who presumes to challenge their views on the subject, the BDS movement and their fellow travellers apparently have no problem in undermining the very democratic, non-racial legacy that Isie Maisels, together with Yusuf Dadoo and many other South Africans fought so long and hard to achieve.

Such radical fringe groups would appear to have no compunction in subverting the democratic institutions upon which the future welfare of this country depends in order to further their extremist agendas. For the future health of our democracy, it is vital that they not be allowed to succeed.

Lesson One from the Zuma riots: You’re on your own, baby!

The ultimate license to loot