July Production Statistics: An indication of a V-shaped recovery?

Charles Simkins and Charles Collocott says the current stimulus should be maintained, but not increased

July Production Statistics: An indication of a V-shaped recovery?

Figures 1 and 2 display the index of value added by covered sector between January and July 2020. In all cases, the index is set to 100 in February, the last full month before the lock down. Table 1 sets out the values of the index in July. 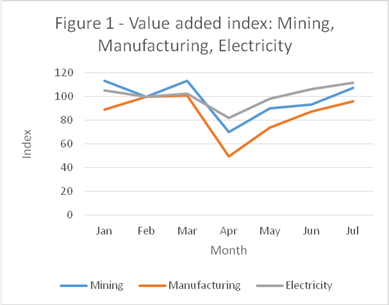 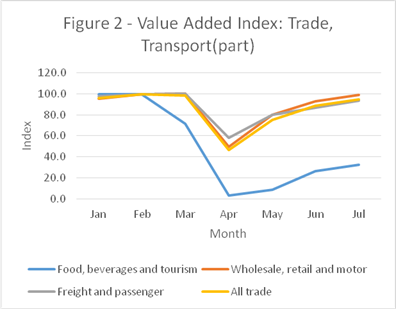 Table 1 and Figures 1 and 2 show more than full recovery by July to February production in mining and electricity, more than 95% recovery in manufacturing, and wholesale, retail and the motor trade, and 94% in the sector of transport, storage and communication covered by monthly production statistics. The recovery in food, beverages and tourism is far from complete. The lag in this sector is predominantly supply constrained. This is grim for the sector, but value added in it is small, at only 7% of value added in the trade, catering and accommodation sector as a whole in February.

Note that the dips in most of the uncovered sectors in the second quarter were much lower than in the covered sectors, with the exceptions of construction and the uncovered part of transport, storage and communication. In both of these sectors, some recovery can be expected in July.

Table 3 sets out the dates by which third quarter data are expected, as well as dates for the October Medium Term Budget Policy Statement and the next meeting of the Monetary Policy Committee meeting.

A complete account of the third quarter plus October monthly production statistics will be available just before mid-December. An update to this analysis will be possible then, with a view to determining whether there will be further recovery, a consolidation of the currently observed recovery, or a reverse. A reverse is likely if and when a second wave of the epidemic emerges. This is entirely possible, as the situation in the top twenty countries (excluding the United States) by number of recorded infections indicates (shown in Table 4).

In light of the currently available information, the following policy settings may be appropriate:

Maintain the current level of stimulus, but do not increase it. Monetary policy is expansionary and fiscal policy is highly expansionary, with a primary deficit of 9.7% expected in the 2020/21 financial year.

Maintain the policy of providing liquidity in the government bond market, but do not embark on quantitative easing.

Do not increase taxes significantly before at least the middle of 2021/22 financial year, i.e. while a resurge of the epidemic is possible. With luck, vaccination may become widely available in the second half of 2021.

To provide for the possibility of a second wave of the epidemic, establish a contingency fund to provide again for measures for income support, support to vulnerable households at the current rate, and wage protection at current rates. Continuation of the credit guarantee scheme and support for small and medium enterprises and the informal sector can be continued within the parameters already set.

Defer consideration of grants to the 18-59 age group until the second half of the 2021/22 financial year. There are many options, such as restriction to a particular age range and various conditions for grants, and these should serve carefully defined objectives. Any programme should be fiscally neutral and compatible with stabilization of the debt to GDP ratio by 2023/24 or 2024/25.

In an uncertain environment, policy has to be developed in the light of emerging data, so the suggested settings are provisional and subject to revision.

‘We want to build the Lanseria Airport of Cape Town’, says Rob Hersov