On Sunday the Sunday Sun newspaper reported that President Jacob Zuma and controversial SABC chairperson Ellen Tshabalala have been in an intimate relationship for years. Tshabalala has come under criticism recently for allegedly faking various aspects of her curriculum vitae. She has however refused to either stand up her alleged qualifications (including a UNISA degree) or to resign. The newspaper stated:

"ELLEN TSHABALALA'S qualifications as SABC board chairwoman have been questioned. But Sunday Sun can now reveal that she did graduate . . .

FROM THE JACOB ZUMA SCHOOL OF LOVE!

Ellen and the "father of the nation" have allegedly been an item for years. And this well-kept secret has become the subject of gossip in the corridors of power, at Luthuli House and Parliament."

On Monday the City Press website reported that Tshabalala had angrily denied the allegations when contacted saying "I have no relationship with the President". She told the publication, "I don't know why people do things like this. Do people realise when they do things like this the people they talk about have families who are affected by what they say?" She also reportedly said she was considering legal action.

President Jacob Zuma currently has four wives. In October this year the Sunday Times reported that taxpayers spent R13.019-million on the presidential spousal support unit in the 2013-14 financial year. This report was described by New York Times online columnist TO Molefe as "bigoted" for its implied criticism of President Zuma's "polyamorous lifestyle".

In an opinion piece for News24.com Molefe wrote that "We need to get over our bias in favour of monogamy and accept that polyamory - or non-monogamy - if you will, is a relationship choice equal to any other." 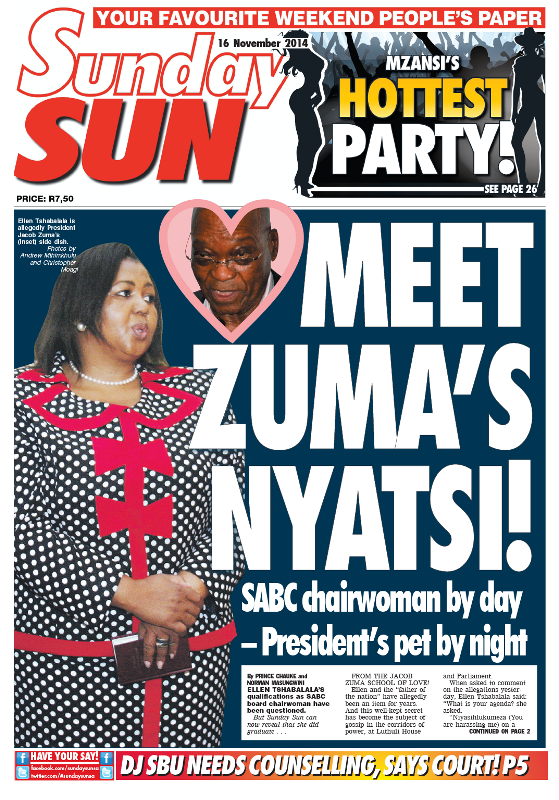