Andrew Donaldson says goodbye to his dog Bob, gone before the BLF could get to him 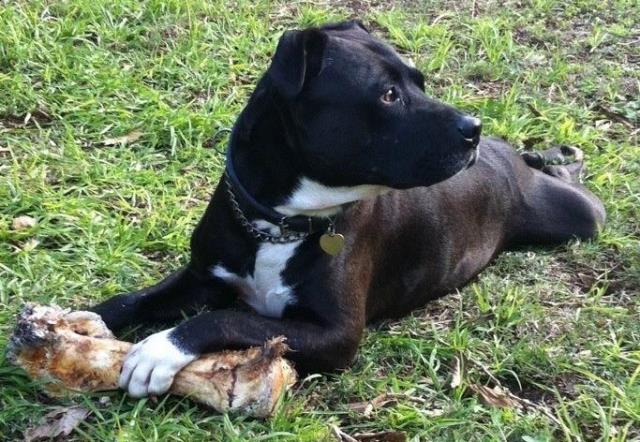 ON Wednesday Bob went to that fabled farm in Elgin and, for all the reassurances of painless procedures and it being for the best, it hurt like hell to watch him go, and that moment he stopped breathing and the tip of his tongue slipped out his mouth tore me in half. (They’ve got a point, these people with the platitudes, when they say dogs will give you the best days of your life — and then one of the worst.)

It was particularly brutal with Bob. He didn’t need putting down. He was old, coming on for thirteen, but there was still plenty of vigour there and certainly no sign of infirmity. Wholly unaware of the betrayal to come, he practically dragged us into the animal clinic.

Rehoming him was out of the question. Who would take in a dog that old? Besides, we were his people; he was set in his ways with us. And he wan’t allowed to come along as the British consider him dangerous and won’t have his sort there. They are perhaps not wrong in taking this position.

Despite being a softy with other people, Bob had a pathological hatred of other dogs. He once got hold of a Jack Russell called Pedro. That incident cost me about R14 500 in veterinary bills but they managed to save Pedro’s life. I’m not proud of it, but Pedro wasn’t quite so yappy after that.

But now Bob has gone and if there is any consolation in all this it is that Andile Mngxitama and his Black First Land First mob cannot now kill him as they have threatened to do when they come after white South Africans, their kids and their pets.

This, you may have heard, was pretty much the message Mngxitama delivered at a “homecoming rally” in Tlokwe in the North West last weekend.

He’s a fairly excitable chap at the best of times, but it appears that a remark in jest by business magnate Johann Rupert during a recent radio interview has brought out the full-blown madman in the BLF leader and Gupta finger puppet.

Rupert told PowerFM that he was friendly with Eskom chairman Jabu Mabuza who also chaired the SA Black Taxi Association. Then as an aside, Rupert joked, “So I also have my own army. When those red guys [the Economic Freedom Fighters supporters] come, they’re gonna have to remember the taxi association.”

Thus, according to Mngxitama, was a declaration of war on black people. It’s an idiotic inference but what can we say? Clearly no mngxment material here.

Even kittens and puppies?

Yes, even kittens and puppies.

He was most aggrieved, was our Pol Pot. Why was he so mngxunderstood? Had they not realised he was quoted out of context, and that context was one of self-defence?

“White people,” he complained, “have convinced themselves that they can unleash violence upon blacks and blacks have no right to fight back. Fighting back is considered a violation of the sanctity of whiteness.”

It was unthinkable that people wanted his Twitter account shut down. “Can you believe it? Whites believe we have no right to self defence.”

The outrage was shared by Zanele Lwana, the small, shouty person who is the BLF’s deputy president: there was, she has insisted, absolutely nothing wrong with the leader’s tweets.

“The only sin committed by BLF president is defending black people,” she said. “President Mngxitama correctly stated that for every one black life taken, five whites would be taken!”

In other words, not misquoted at all.

Actually, here at the Mahogany Ridge, we have mgnxed feelings about the BLF president’s Twitter account being closed.

On the one hand, he is an unabashed racist and probably deserves to be shut up. On the other, he has genocidal aspirations; as such, he is dangerous, and it would probably be in our interests if we knew what was going on in that twisted, hate-filled head. Who knows, but the next Mngx Kampf could well be a string of tweeted brain farts.

What’s more, if he bangs on long enough about killing white South Africans, maybe people will begin to listen to him, realise what he’s saying, and understand that he’s not, as one correspondent put it, a “radical activist” continuing a “centuries-old tradition of political pamphleteering and verbal gunslinging” but rather a dangerous fool who would resort to some real gunslinging given half a chance.

Not a nice person, in other words.

It’s always struck me as odd that white racists like Vicki Momberg and Penny Sparrow paid harshly for their idiotic and intemperate outbursts and yet hard core haters like Julius Malema and Mngxitama are treated with kid gloves.

Earlier this week, PoliticsWeb’s Ratcatcher column made the point that foreign media largely ignore the extreme racial rhetoric emanating from the likes of Malema and Mngxitama, yet have been “quick to report on examples of crass racial comments and slurs by white (and Indian) South Africans” who were, for the most part, “intellectually limited or mentally disturbed and of no public standing”.

One plausible explanation for this is that it is all convenient to present foreign viewers and readers with a “simple” apartheid-era South African narrative: whites are bad, blacks are good.

It’s like shooting fish in a barrel, and it would appear that no deviation from this narrow prism through which our “story” is lazily and sloppily monitored will be tolerated.

Any attempt to bring a more nuanced understanding of the complexities of our affairs is probably a waste of time. Too messy, and besides, we don’t want to confuse the poor dears on the Islington bus.

So I may just have a word with them when I get there.

Sadly, this is my final column from the Mahogany Ridge. There was talk of expropriation without compensation, but the sad truth is that the place has been bought up by developers who plan to use the space as some sort of lever to prise dollars out of busloads of tourists. Or something like that.

But one mustn’t be churlish. After all, these visitors may want to throw money at the locals. But, whoever they are, these tourists, will they know the mngxeaning of Mngxitama and his political ambitions? Didn’t think so.

When next you hear from me it’ll probably be from the Slaughtered Lamb or the Coach & Horses or some such. It won’t be the same, of course, but at least I’ll be free of the psychic baggage and racial toxicity that has infected my form in recent years.

Before I turn out the lights here for the last time, let me just say that I’ve been hearing a lot of preposterous chatter that we must all vote “strategically” next year, that we must do everything in our power to keep the likes of Malema and Mngxitama at bay and ensure that the ANC is comfortably returned to power and dear Cyril Ramaphosa can carry on with his reforms.

Well, good luck with that.

It is of course quite true that there are some good people in the ruling party. Not every ANC politician is a rent seeker, a corrupt public servant, a thief, a looter, an inept cousin or a sex pest. But it is sadly these individuals who give the other 20% a bad name.

Twenty percent is generous. But then this is the festive season.

Malema and the press

What is the JSE doing to boost stock market activity? Big plans to fire up SA equities – Sam Mokorosi

Angry SAs speak: If Cyril can’t secure a vaccine, at least give us Ivermectin

Making the most of your money in 2021 – insights from Heystek, Segall