On Saturday evening the South African National Editors Forum, representing the cream of South Africa’s journalistic and editorial elite, held a banquet dinner at which its Nat Nakasa award for editorial integrity and courage in journalism was announced. This went to the Daily Maverick editor Branko Brkic, for his role in managing and breaking the Gupta leaks expose. The keynote speaker at the dinner was Chief Justice Mogoeng Mogoeng. Mogoeng had been asked by the organisers to speak on “the importance of courage and free media in exposing and holding power to account” but in his address he sought to interrogate the notion that the role of the media was to focus just on ANC government power.

He suggested rather that sinister external forces were, and probably still are, responsible for Africa and South Africa’s many problems. “To be truly effective in exposing and holding all real powers accountable”, he told his audience, “we must seek to know those powers, what sustains them and why they may never let go.” In support of this thesis he then quoted, as he recently had in other speeches (including to members of the judiciary), the “the loaded words of Lord Macaulay on 2nd February 1835 while he was addressing the British parliament”:

“I have travelled across the length and breadth of Africa and I have not seen one person who is a beggar, who is a thief such wealth I have seen in this country, such high moral values, people of such calibre, that I do not think we would ever conquer this country, unless we break the very backbone of this nation, which is her spiritual and cultural heritage and therefore, I propose that we replace her old and ancient education system, her culture, for if the Africans think that all that is foreign and English is good and greater than their own, they will lose their self-esteem, their native culture and they will become what we want them, a truly dominated nation.”

Using this quote as his authority, Mogoeng stated, “the much talked-about poverty, unemployment and inequality did not just happen. The contentment, abundant supplies of the needs of the African people, their cultural and educational heritage was deliberately destroyed by a colonial power to entrench poverty, unemployment and inequality. Crime and corruption, according to Lord Macaulay, was virtually non-existent. There was no theft, he said. The high moral values upheld and the calibre of the people of Africa struck him as being so essential to the sufficiency or prosperity, morality, peace and virtual absence of crime, that it all had to be destroyed to reduce the people to the level of poverty, helplessness, criminality and absolute dependency that they have been brought down to, over the years. The very backbone of their being and success had to be broken. Otherwise, Africa would never have been as poor, run down and despised as it is.”

To any ordinary reader with basic historical knowledge some aspects of this quote jar with plausibility. In 1835 Africa was neither a country nor a nation. It was riven at the time by the indescribable horrors, and devastating effects, of the intra-African slave trade in which the continent’s peoples were being raided, enslaved, marched to the Atlantic and Indian Ocean coasts, and sold off to European and Arab traders for export to the Americas and the Middle East. 1835 was also twenty years before David Livingstone would traverse central Africa, becoming the first European to view the Victoria Falls, and forty three years before the European powers carved up Africa between them at the Congress of Berlin. It seems somewhat unlikely then that Thomas Babington Macauley (the son of a prominent anti-slavery activist) would either have made such a journey at that time or seen what it is said he claimed to have seen.

An online search of the provenance of this quote quickly reveals that this was an internet meme originally meant to have applied to India. Someone simply took out “India” and “Indians” and replaced them with “Africa” and “Africans”. See two images below. 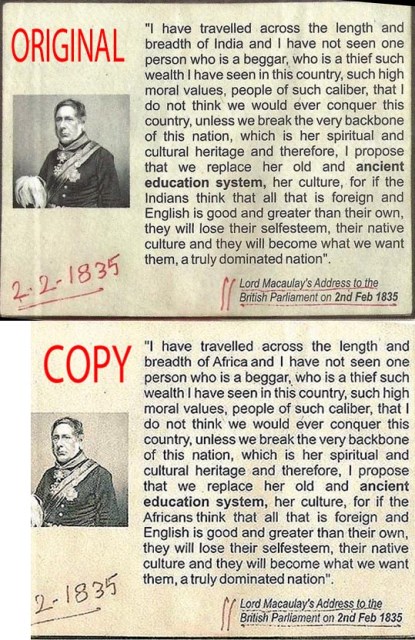 Furthermore, as a number of online articles point out, this “quote” by Macauley on India is also a complete fabrication. On the 2nd of February 1835 he was in India, not Britain, and so could not have delivered a speech to the British parliament. Indeed, although all of Macauley’s written works and transcripts of his speeches in parliament are readily available online the earliest (secondary) source that can be found for this quote is from 2002.

Macauley had produced a minute on Indian education on that date, dealing with the question of whether higher studies for the local population there should be pursued in English or Sanskrit or Arabic, but the “quote” is not even an accurate summary of his views. He did not view the knowledge contained in Sanskrit or Arabic texts as in any way comparable with those of the Europeans. European literature was clearly superior, he wrote, and in “works in which facts are recorded and general principles investigated, the superiority of the Europeans becomes absolutely immeasurable.” He argued that education in English would provide Indians access to the world’s finest knowledge, in the same way that knowledge of Latin and Greek had unlocked the wisdom of the ancients for the then intellectually backward northern Europeans only a few centuries before. He wrote:

“I feel with them [the proponents of education in Arabic or Sanskrit] that it is impossible for us, with our limited means, to attempt to educate the body of the people. We must at present do our best to form a class who may be interpreters between us and the millions whom we govern, --a class of persons Indian in blood and colour, but English in tastes, in opinions, in morals and in intellect. To that class we may leave it to refine the vernacular dialects of the country, to enrich those dialects with terms of science borrowed from the Western nomenclature, and to render them by degrees fit vehicles for conveying knowledge to the great mass of the population.”

Moreover, in a speech to the British parliament two years previously on the 10th July 1833, Macauley had set out in detail his views on the state of India at the time that the East India Company began its conquests eighty years before. He described the nearest parallel to India at the time as to Europe in the fifth century, in the midst of the decline and collapse of the Roman Empire.

“The people were ground down to the dust by the oppressor without and the oppressor within; by the robber from whom the Nabob was unable to protect them, by the Nabob who took whatever the robber had left to them. All the evils of despotism, and all the evils of anarchy, pressed at once on that miserable race. They knew nothing of government but its exactions. Desolation was in their imperial cities, and famine all along the banks of their broad and redundant rivers. It seemed that a few more years would suffice to efface all traces of the opulence and civilization of an earlier age. Such was the state of India when the Company began to take part in the disputes of its ephemeral sovereigns.”

Kallie Kriel & the 'apartheid as a crime against humanity' question