Charles Simkins says the demands for an expanded mandate are not so much wrong, as irrelevant

Positions are being taken on the issue without a clearly articulated economic theory to back it up. One has to infer intuitions about theory based on what people say. Some participants in the debate appear to believe that, with an appropriate monetary policy setting, the economy can be moved to full employment, say 5%, if at the cost of higher inflation. That view was shown to be wrong more than 40 years ago, as Labour Prime Minister James Callaghan pointed out in a speech to the 1976 party conference.

We used to think that you could spend your way out of a recession and increase employment by cutting taxes and boosting government spending. I tell you in all candour that that option no longer exists, and in so far as it ever did exist, it only worked on each occasion since the war by injecting a bigger dose of inflation into the economy, followed by a higher level of unemployment as the next step.

While Callaghan referred to fiscal policy, the conclusion applies to monetary policy, as another instrument of demand management. In fact, the early Keynesians understood perfectly well that expansionary fiscal and monetary policy could overheat the economy, leading to inflation rather than an increase in real output and employment. Indeed, it became recognised from the late 1960s on that persistent overheating of the economy would lead not only to higher inflation, but accelerating inflation. We only have to look immediately to the north to see the consequences of reckless monetary policy, from which the Zimbabwean economy has never recovered.

The contemporary approach, used by the Reserve Bank, is to estimate the potential growth rate, the rate at which the economy can grow sustainably over the medium term. While actual growth can be influenced by monetary policy, the potential growth rate is independent of it. Many factors, both domestic and international, determine the potential growth rate. Domestic factors include the structure of the labour market, the match or mismatch between the supply of skills and the demand for them, the degree of competition in product markets, to mention just three. The potential growth rate can be increased by pro-growth policies, neglected for many years, and which need to go well beyond the assertion that South Africa is ‘open for business’.

Likewise, the International Monetary Fund’s projection of South African growth from 2021 to 2024, which can be taken as its estimate of potential growth is 1.8%. So while fiscal and monetary policy should be mildly expansionary right now, it can achieve relatively little without overheating the economy. The real task is to raise the speed limit and to achieve that structural reform is needed.

The practice of the Monetary Policy Committee is to review the current state of the Reserve Bank’s quantitative analysis at each of its meetings and then debate whether the repo rate, the benchmark interest rate at which the Reserve Bank lends money to commercial banks, needs to be changed and, if so, by how much.

The repo rate influences all other short term interest rates. Sometimes, the members of the MPC all agree. Sometimes they do not, in which case the decision rests on the majority vote. One can reasonably have differences of opinion about whether the repo rate should be a quarter or half a percent higher or lower than the rate decided upon. But disagreements beyond this range are virtually unknown.

There are, of course, developments which cannot be known in advance. But as they occur, they are incorporated in the quantitative analysis, so that its results may change between meetings, exercising an influence on the best next steps.

It is this context that proposals to widen the mandate of the Reserve Bank to include output and employment perspectives are not so much wrong, as irrelevant. The Reserve Bank’s analysis already takes output into consideration and the reason why potential employment is low is structural and not remediable by monetary policy.

Even when updated, quantitative models can provide a point estimate of outcomes, accompanied by a range within which outcomes can be predicted with a specified range of probability, say 50% or 90%. One therefore has to distinguish between ex ante forecasts and ex post outcomes. This is a distinction which Carol Paton failed to make in a recent Business Day article[2].

Decisions have to be made ex ante, while the Reserve Bank’s performance is judged ex post. This is the reason why the Reserve Bank is given a target range. It could not be expected to reach a precise target. If it thinks that upside and downside risks are balanced, it is rational for the Reserve to aim for a point in the middle of the range to give itself the best chance of producing an outcome which will fall in the target range. The Reserve Bank has not restricted the range specified by the Minister of Finance.

One can assess the performance of monetary policy in South Africa using the Brazilian experience as a comparator. The last change to the target change in South Africa was at the end of February 2009: a Consumer Price Index range of 3% to 6%. The Brazilians have recently been changing their target range, but for most of the period between March 2009 and the end of 2018, their range was 2.5% to 6.5% - the same midpoint as South Africa’s but with a wider range. 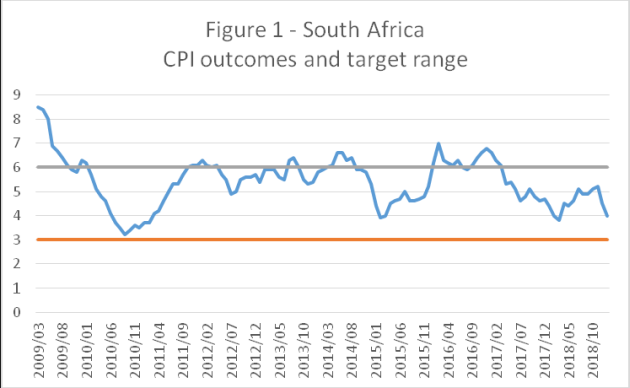 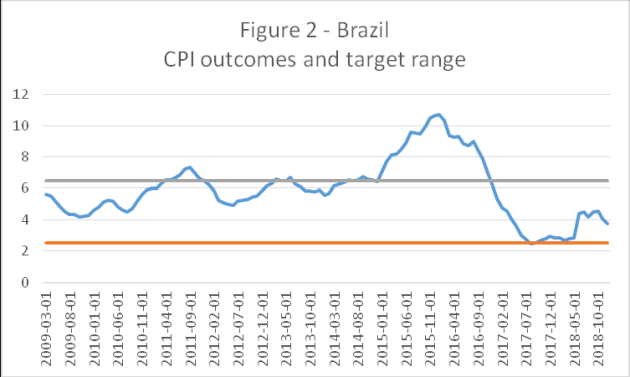 The number of months that the outcome was out of range was 34 in South Africa and 35 in Brazil out of a total of 118 months. But South Africa did not have anything like the 23 month period experience of Brazil at the peak of which CPI was 4.2% above the top of the range.

Fiscal policy, as it affects aggregate demand, was also been steadier in South Africa than in Brazil between 2009 and 2018 as Table 1 shows.

In fact, it was a ballooning of net borrowing by government to 10.2% in 2015 which produced the inflation of 2015/16 and the policy response was to raise the SELIC rate (the equivalent of our repo rate) in Brazil sharply. Figure 3 compares the repo rate to the SELIC rate from March 2009 to the end of 2018. 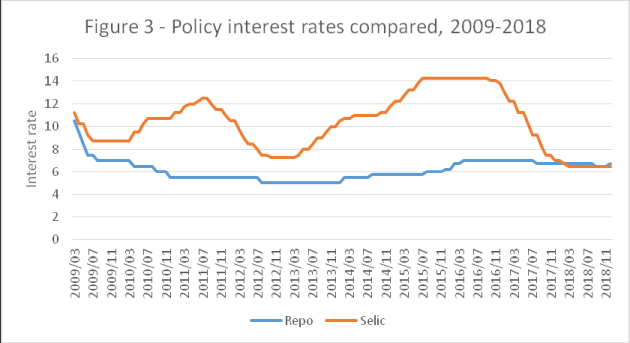 The repo rate has been much steadier than the SELIC rate. The result has been a steadier growth rate in South Africa, as Table 2 shows.

Thanks to then efforts of the Reserve Bank and the Treasury, monetary policy and fiscal policy as it affects aggregate demand have produced steady growth and inflation outcomes, certainly when compared with Brazil. The system is tried and tested. The challenge for critics is to set out a tried and tested system which does better than the performance for the last decade. We await their proposals with interest.

Charles Simkins is Head of Research at the Helen Suzman Foundation.

On the South African right

On the South African Left

The political economy of corruption